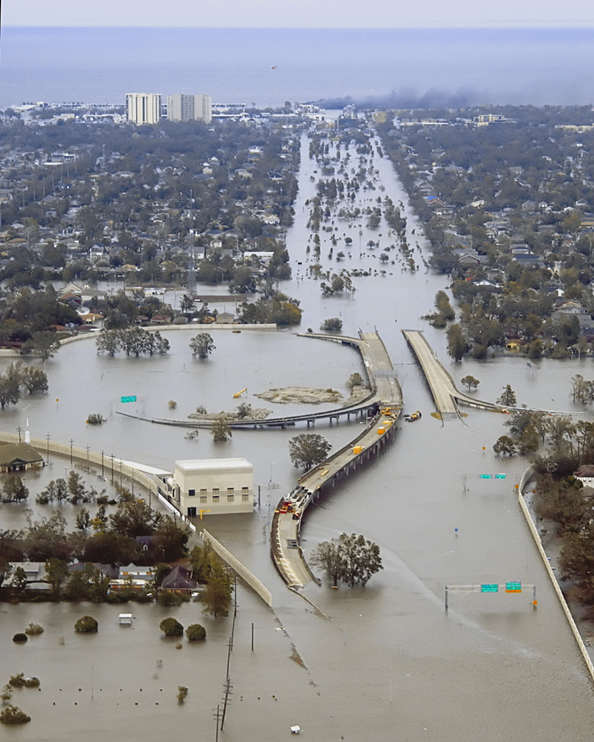 Hurricane Katrina happened 10 years ago, but millions of Americans are still suffering its effects. Emirates Woman revisits the largest storm ever to hit the US, and the lives of those who lived through the violence and tragedy that followed.

“We packed everything,” said Candace Strahan, of the day Hurricane Katrina almost killed her. “We had the cat carriers all lined up. We had the water in the car. We had everything ready to go, but instead of putting it all in the car, at the last second we started throwing things up to the second story of the house. And I don’t know. We stayed in the house.”

Strahan, a 66-year-old artist, lived in Mississippi, near the Gulf Coast. It was August 29, 2005, and a hurricane rarely seen in the southern US had just made landfall, engulfing huge parts of Mississippi, Alabama and Louisiana in floodwater up to 20ft (6m) high. Candace and her husband Jim had planned on visiting Britain and Ireland – the day was their 25th wedding anniversary – but his blood cancer kept them in America. Now, as they holed up indoors, the storm grew worse.

“The lights went out between 3am and 3:30am,” she added. “We were in the bedroom. We were getting some gusts. We’d get up, walk around and check on things. On TV, we saw that the hurricane was hitting the southern part of Louisiana. It was coming ashore and losing some intensity.

“…The sky was dark. It wasn’t that yellowish kind of look. It was dark and it was raining and the wind was making the rain go sideways. We knew we were in the midst of a hurricane, there was no doubt about that. There was debris blowing around. But I wasn’t seeing any big chunks of flying rooftops or any of that. I didn’t hear tornadoes.”

About 9am Candace noticed water racing up the street. Within minutes it was two-feet-high. Candace and Jim picked up their cats, who were now swimming on the ground floor, and ran upstairs. Soon they were watching neighbours’ roofs washing down the road and hearing water lash against their 10ft ground floor ceiling. Windows were smashed so they were quickly boarded with mattresses and other items. ‘If we live through tonight,’ Candace told Jim, ‘I can’t spend another night in here. I will die. Because we can’t breathe up here.’ Not to mention the mosquitoes, the mud, and the stink.”

Soon bodies began to pile up around the house, many of them pensioners. Nearly half of the victims were aged 74 or older. Candace and Jim stayed bolted inside their home for over a day before Jim’s son came to collect them. They moved to Florida and lived in a Holiday Inn before returning to Mississippi. But the house they had built was sold. “I planned that house,” she said. “I designed every inch of it.”

Candace’s story is just one of thousands amid the largest, and third-strongest, storm to hit the United States. By the time Katrina died down around a million people would be displaced and 1,833 dead. Winds reached 175mph (280km/h) as thousands of homes were destroyed. By estimate some US$120 billion of damages were caused. 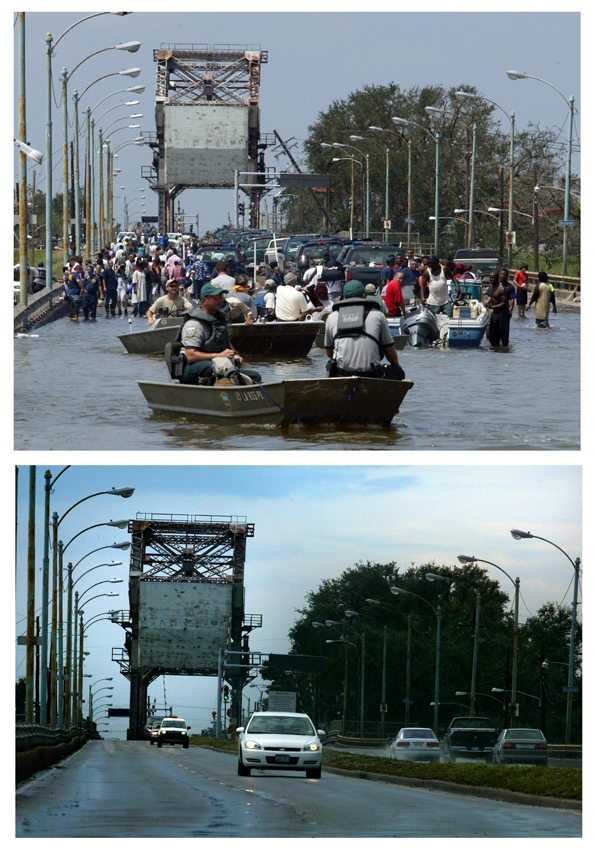 Hurricane Katrina: Before and After

Up to 80 per cent of New Orleans, the city worst hit by Katrina, was under water by the time the storm died. People fled to attics to avoid the water but thousands were swept away, along with cars and thousands of homes. Some tried to escape via a well-known bridge to the suburbs but were turned back by shotgun-toting police officers.

Then-mayor Ray Nagin issued New Orlean’s first-ever evacuation order the day before Katrina hit. He also ordered that the Superdome, space-age home of local NFL team the New Orleans Saints, would be a “shelter of last resort” for those fleeing the storm. It was the third time the stadium had been used in this way, but it was still underprepared. The night of the storm, around 10,000 people sought refuge.

As the carnage passed, the number of people in the Superdome rose to around double that. A lack of food, water purification equipment and chemical toilets led to illness. In the days that followed, reports of violence, drug abuse and rape were widespread. Eventually, with the Superdome suffering extensive roof damage, 13,000 people were transferred to Houston’s Astrodome.

Some 156 reports of violent crimes were received. Vandalism was rife. A two-year-old girl slept in a puddle of urine. One mother was given two nappies, and told to reuse them by scraping off the excrement. “There is faeces on the walls,” one man told the Seattle Times. “There is faeces all over the place.” In total six people died in the stadium: four of natural causes, one of a drug overdose and the sixth suicide, when a man jumped off a seating terrace. 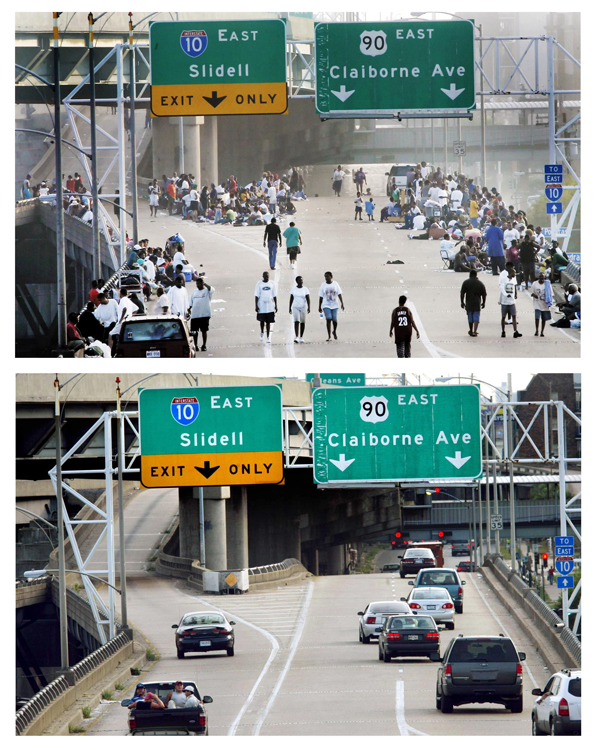 The official number of Katrina and post-Katrina rapes was four, though rights groups say the unreported figure would be far, far higher. Two of the four investigated occurred inside the Superdome – one was of a child – while another was perpetrated against Anastasia, a 25-year-old hairdresser who was raped in broad daylight beside a branch of McDonald’s. “I didn’t see any police officers – I could have got away with murder,” she said. “It was that terrible. So I can assume what the criminals were thinking the same, and that’s exactly what happened.”

Ms. Lewis, a 46-year-old home healthcare worker from the city, was raped on the day of the storm. She was holed up in an old peoples’ home, which had lost electricity. While trying to catch a rest in a hallway a man with a gun attacked her. “Some terrible things happened there…and there was nobody there to protect you,” she said. “They just left us to die. Nobody cared…all I could do was pray, pray for rescue, pray that I didn’t have any kind of transmitted disease.” Everyone was under extreme stress, she says. They “didn’t want to hear it.”

“…Mothers were giving birth in the locker rooms,” wrote then-Louisiana State University student Bill Martin, in what would become a viral account of Katrina. “The auxiliary gym ‘Dungeon’ was being used as a morgue. I couldn’t take myself down there to see it. I worked from 8pm, until 2:45am. Before I left, three more buses rolled in and they were almost out of room. People were standing outside. The smells, the sights were hard to take.”

Grief outside the Superdome crescendoed. Louisiana’s large black and Hispanic population claimed action would have been far speedier, had Katrina’s victims been white. Nagin, himself black, came under fire for an initial proposal that preferred reconstruction for neighbourhoods with the greatest likelihood of fiscal return – i.e. the houses of richer, and generally whiter, New Orleanians. In response Nagin swung the opposite way, asserting that it was God’s will New Orleans would remain a “chocolate city”. He now resides in prison on federal corruption charges.

But large parts of the city remain in ruin. Much of that will remain so. Some has even made money as a post-apocalytic film set, the most recent client being big-budget family thriller Jurassic World. The Tremé district, close to the city’s famous French Quarter and known as a historic haven for people of colour, has even become a favourite tourist spot following an acclaimed eponymous HBO TV series. Race has remained an issue throughout the cleanup, and has only intensified as parts of New Orleans, and the Gulf Coast, lay in disarray.

“People say it’s not about race, it’s about class,” said Laura Paul, a local nonprofit director. At the end of the day, in this country that’s the same conversation. This is a poor black community. That’s why the recovery is slow.”