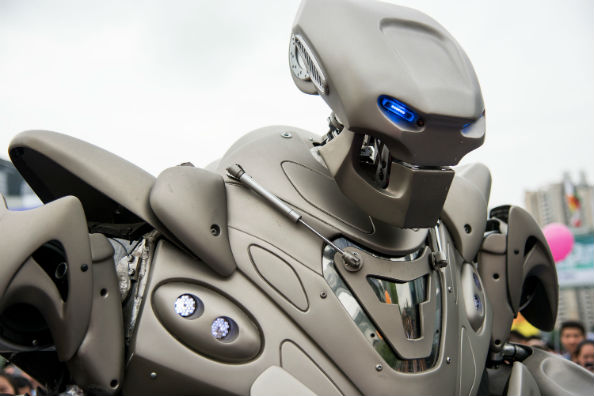 With the advancement of modern technology, there’s no doubt that the world is getting smart with cyboids and robots taking over various roles to make our lives so much easier – the robo-Vacuum cleaner, anyone? Yet, when a six-foot-plus metal-clad robot walked through the crowds at the 10th edition of the Dubai Lynx festival we were all still surprised.

The Dubai Lynx festival 2016 saw some of the region’s greatest innovators come together at the Madinat Jumeirah to honour their creativity in advertising and communications.

Related Story: Should You Break Up With Your Smartphone?

However, there was one innovation that truly caught the public’s eye, and it came in the form of a large walking, talking and joke cracking robot. Think we’re lying? Think again, we were able to capture video footage of the robot, who can be seen entering the event on some sort of mobile docking station before stepping off and casually walking among the crowd and stealing the show – when you’re a giant robot among humans, you’re bound to get attention. Not only did the robot, who is called Titan, by the way, talk to the Dubai Lynx festival crowd, he also serenaded them with modern pop songs and took photos, and selfies and encouraged others to tweet about his appearance. What can we say, he definitely has marketing down to a tee.

Despite being a huge hit, sadly Titan, won’t be staying in Dubai – he made an appearance at the Dubai Lynx festival thanks to company PHD UAE who specialise in communications innovation.

Also, we don’t mean to crush your dreams, but unfortunately, Titan is not entirely a robot. The costume was created by Cyberstein Robots back in 2004, and is worn by an actor who controls it partially through body movement and partially via remote control. You see the little mirror thing on his chest that looks like a Transformers logo? Yeah, that’s a two way mirror. The guy on the inside is looking right out of it.

Inside the chest portion of the 350kg suit you’ll also find a little control panel, used to control the upper torso. As far as the voice goes, well, the actor inside has a voice modulator, and can also select phrases from a pre-recorded list.

If you missed out on Titan at the Dubai Lynx festival, or you loved his performance that much – you can book him for your own events at titantherobot.com. Otherwise, we think it’s only a matter of time before he gets his own TV show – it could be Total Recall meets Oprah!