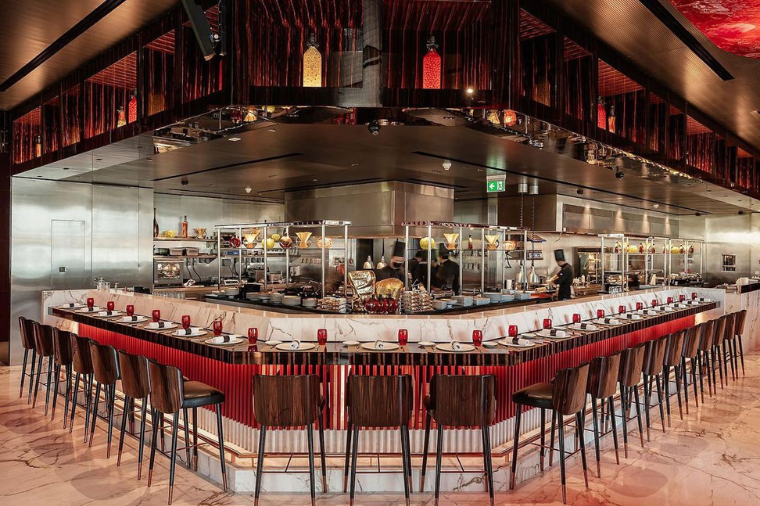 When it comes to fine dining, Dubai most definitely knows how to impress.

Adding to the emirate’s food scene is a concept by late renowned Michelin-starred chef Joël Robuchon. Enter L’Atelier de Joël Robuchon where dishes are born to touch all the senses. Known for his love for quality ingredients, textures and flavours, Executive Chef, Roberto Torre has played an imperative role in bringing his culinary vision on a plate.

It was no easy feat for Chef Roberto to pave a way for himself in this industry and despite the challenges, he pursued his dreams after learning from his revered mentors including Monsieur Joël Robuchon himself.

“The hardest part of starting my career as a young Commis Chef was being away from my family since I was 17,” he tells Emirates Woman.

By converting his passion for food as a young child into a full-time successful career, Chef Roberto has led the brigade as Executive Chef of the L’Atelier de Joël Robuchon in Dubai since its opening in 2020.

Emirates Woman spoke to L’Atelier de Joël Robuchon’s Executive Chef, to delve into his career and how he’s played a pivotal role in transforming the brand.

Having been born and raised in Italy, I attended the Hotel School in Salerno, which is located in Campania (southwestern Italy). I began my career in luxury hotels in Italy, under the direction of Executive Chef Domenico d’Imperio at the six-star hotel Tre Vaselle in Umbria, where I learned about consistency and how to enhance flavours. After spending some time in the Maldives, I settled down in Paris in 2011 and joined Chez Jean – a Michelin star restaurant. In 2015, I joined Joël Robuchon Group and more specifically L’Atelier de Joël Robuchon Saint Germain (which is the first L’Atelier of Monsieur Joël Robuchon, created in 2003) as Executive sous-chef. Since 2020, I have led the brigade as Executive Chef of the new L’Atelier de Joël Robuchon in Dubai.

What initially inspired you to enter the hospitality realm?

In the beginning, there was nothing that predestined me to enter this world. No one in my family or in my circle came from this hospitality background. Some of my earliest memories come from my grandparents and my mother. I remember helping my grandmother and mother make traditional pasta when I was a child. I learned how to cook authentic Italian dishes, particularly those from the south of Italy, where I’m from. A practice that, over time, gave me a taste of the ingredients as well as the gastronomy, was introduced to me by my grandfather who taught me how to grow vegetables. Ultimately, each of them transmitted to me, in their own way, the taste of effort, the love of a well-done task, and the taste of simple, honest and authentic work. It wasn’t long before what started out as only curiosity gradually turned into a passion.

The opening of the new L’Atelier de Joël Robuchon in the Middle East. Joël Robuchon Group offered me the opportunity to be in the driver’s seat of this amazing kitchen and restaurant as Executive Chef.

L’Atelier de Joël Robuchon opened back in October 2020. How have things evolved for the restaurant over the last two years?

Since the opening, our team has worked very hard and has become even stronger. We have found our cruising speed. Over the months, the team has continued to grow together. To make our clients happier and more satisfied, we will continue to improve ourselves. These conclusive results have been achieved with the help of our loyal guests for a few months now. We are actively developing new suggestions to always surprise our guests. Our concept is timeless and present everywhere in the world. Providing quality and pleasure to our gastronomic clients is the most important thing to us. It is our commitment to focus on quality and pleasure, and pursue our efforts to be at the top.

How do you continue to embody the legacy of Joël Robuchon?

We will pursue the legacy of Joël Robuchon, the most starred chef in the world, in being creative and maintaining the requirement of Monsieur Joël Robuchon as he taught us.

In your opinion, what are the hero dishes at L’Atelier de Joël Robuchon?

What sets the F&B industry in Dubai apart from the rest of the world?

Dubai’s culinary scene has become increasingly reliant on the F&B industry. It is now one of the fastest growing and most competitive industries in the world. A great deal of innovation has occurred in the quality and diversity of food and restaurants over the years. International travellers are becoming attracted to Dubai and the UAE because of its food scene. Here in Dubai/the UAE, there are some brilliant places to eat, full of life, style and atmosphere.

What are the hurdles you’ve experienced throughout your career?

The hardest part of starting my career as a young commis chef was being away from my family since I was 17. At this age, you usually spend time with family and friends and enjoy a carefree existence. Today, with hindsight and experience, it looks more like a plus than a negative. My life and career as an Executive Chef have been greatly enriched by these sacrifices made 20 years ago.

What have been the milestones?

The first decisive step was joining Chez Jean with Chef Attilio Marrazzo as soon as I arrived in Paris. The opportunity to work in the world capital of gastronomy is one of the most important events in the life of any cook. There is a reason why French Gastronomy has been listed as a UNESCO World Heritage Site. Later, when I joined the first Atelier de Joël Robuchon Saint Germain and I met Axel Manes, a disciple of Joël Robuchon, and one of his Chefs. Throughout his career, he has been always in search of new creations, always more original, composed of excellent products, which have been carefully selected. This journey with Joël Robuchon Group really defined who I am today.

Finally, what are the future plans for L’Atelier de Joël Robuchon?

L’Atelier de Joël Robuchon in Dubai is one of his last projects. Monsieur Joël Robuchon was very involved in this project which took many years to be achieved. His spirit, mind, and imprint are evident in this accomplishment. In keeping with his style and principles, we will work hard as he always did.