Hot New Celebrity Couples That Will Shock You 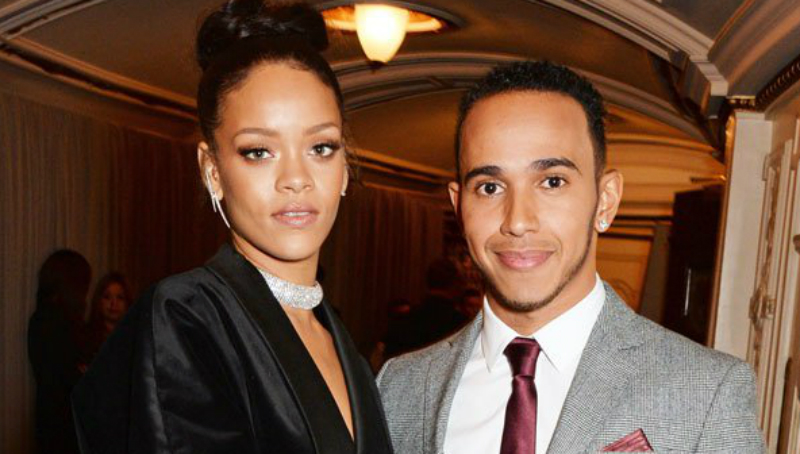 After a summer of big name break-ups in Hollywood it’s a relief to know that things have been hotting up for some stars when it comes to romance. There are finally some new celebrity couples on the radar including a few that will raise a few eyebrows.

Two top models have brothers in arms, a former Pussycat Doll is seeing a redhead while her ex has moved up a gear to get racy with a pop megastar. These are just some of the hot celebrity couples burning up the gossip around Tinseltown… 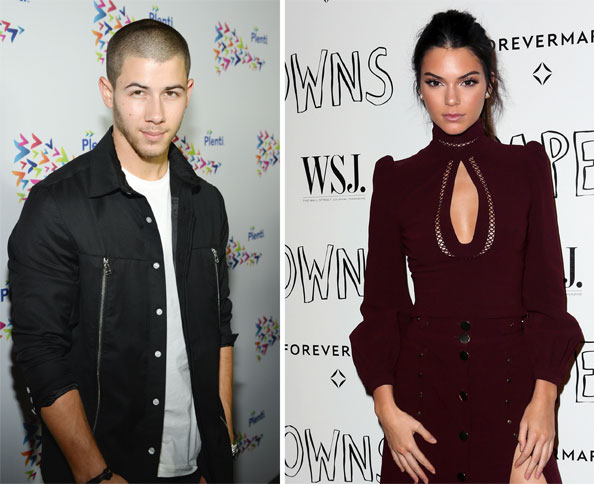 LOVE STORY: It’s not easy keeping up with Kendall and her love life. The 19-year-old model has been linked to two Brit boys – Formula One ace Lewis Hamilton (see below) and former One Direction heartthrob Zayn Malik – already this year but right now she’s all over all American pop idol Nick Jonas, 22. The couple met through Kendall’s best pal Gigi Hadid who just so happens to be dating another Jonas brother, 26-year-old Joe. Nick and Kendall have been spotted on several “hot dates” in recent weeks.

HOT ROMANCE RATING: 2/5 This one seems to be a slow burner. “I’m focused on my work and that, to me, is the priority right now,” says Nick who is reportedly happy to “hang out” with Kendall when he can. Kendall meanwhile is anxious to take their relationship to the next level but her jet-set life means that’s unlikely to happen any time soon. 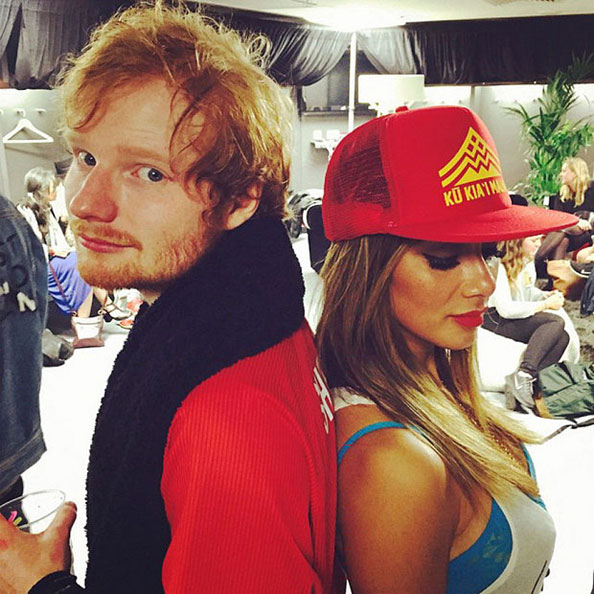 LOVE STORY: Nicole certainly isn’t the first girl to have found solace in Ed‘s songs after heartbreak but she is almost certainly the first to go from listening to his soulful tracks to dating him! Ed, 24, at first just provided a shoulder to cry on for the 37-year-old former Pussycat Doll but things have quickly become more complicated than that. Meanwhile, the whole world seems fascinated by what some perhaps unfairly regard as an “unlikely romance” between super fit Hawaiian hottie Nicole and ginger Brit Ed.

HOT ROMANCE RATING: 4/5 Other than a few Instagram snaps, Ed and Nicole have kept their developing relationship out of the limelight. Ed, meanwhile, is wooing Nicole with simple pleasures like pizza while Nic has told pals she’s intrigued by her Ed. “They’re extremely close,” reports one source close to Nicole. “She says he is the male version of her.” 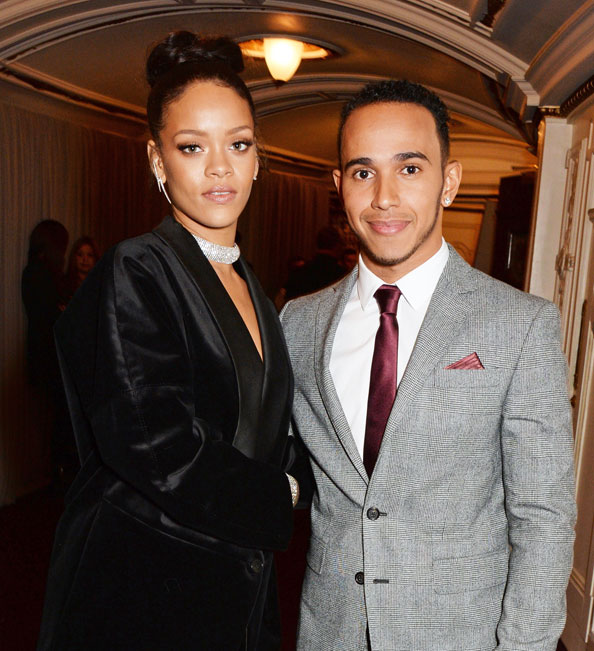 LOVE STORY: Motor racing champ Lewis has certainly been revved up when it comes to the ladies so far this year. While his ex is with Ed, Lewis has moved on with a quick (rumoured) fling with Kendall Jenner and now a 100mph romance with pop icon Rihanna. Lewis, 30, and 27-year-old Rihanna made headlines as a couple when they were snapped partying together in Barbados.

HOT ROMANCE RATING: 5/5 This one is in pole position on the grid or racy romances. While neither have spoken about their relationship, it’s clear there is more than just hype between Lewis and RiRi. Even Sharon Bellamy Thompson, a close friend of Rihanna’s Barbados-based family, thinks this is a match made in celebrity heaven. “They would have beautiful babies,” she says. “As long as this man makes her happy, he’s got my approval. You’ve got to love his British charm.” 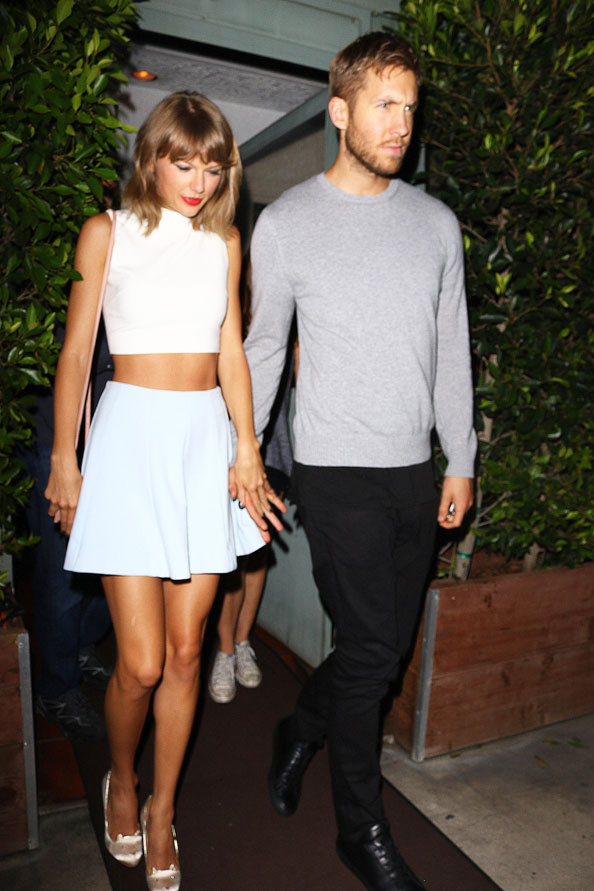 LOVE STORY: OK, so this isn’t so secret. You only have to look at Taylor‘s Instagram account to see that she is crazy for Calvin. The 22-year-old Shake It Off singer has been paired off with Brit DJ Calvin, 31, ever since they appeared at the Billboard Music Awards together in May. Taylor has since stopped writing songs about heartbreak while Calvin is well and truly over his long relationship and difficult break up with Rita Ora.

HOT ROMANCE RATING: 5/5 Calvin seems tailor made for Taylor (excuse the pun) and this is a star couple that may just last the distance – some are even talking wedding bells. “Taylor had gotten to a place in life where she’d given up on fairy tales and Prince Charming, but Calvin came along and swept her off her feet,” reports a source close to the clearly loved-up couple. “It was a total surprise — she never expected this.” 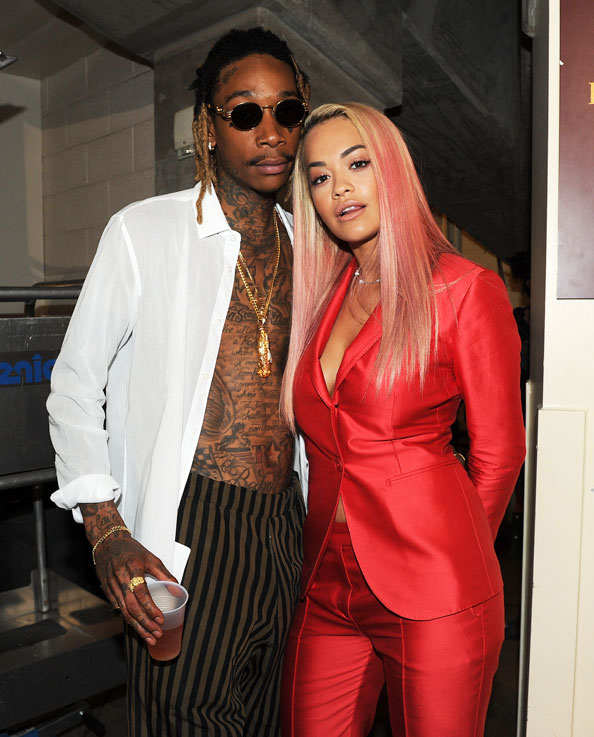 LOVE STORY: The latest chapter in Rita’s colourful love life seems to be just beginning. The 24-year-old singer looks like she’s moved on from Calvin Harris and a year-long thing with Ricky Hilfiger to be wrapped up in rapper Wiz, 27. The couple have been seen hand-in-hand on a number of dates around LA and posed for cosy pictures together at the recent Teen Choice Awards.

HOT ROMANCE RATING: 2/5 This hot couple could well spark into a full-on relationship or they could just as easily fizzle out with the summer. What is safe to say is that Rita needs a man in her life. “It’s a terrible feeling, being lonely… I’m still a girl,” says the sexy singer. “I’d love a boyfriend but it’s hard when they’re not in the industry. I wouldn’t care what he did as long as he made me laugh. I love laughing.” 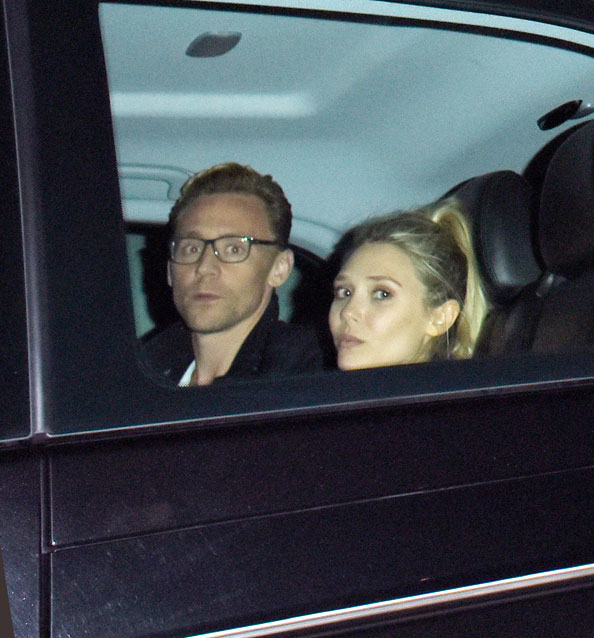 LOVE STORY: Proving that Cupid has more than just pop stars and supermodels in his sights are Elizabeth and Tom in a classic on-set romance. The couple fell for each other while filming drama I Saw The Light and get to play superheroes together in the upcoming Captain America sequel.

HOT ROMANCE RATING: 4/5 It’s perhaps no surprise that two Marvel comic book movie stars could be so super-secret about their relationship. Tom, 34, and 26-year-old Elizabeth have been an item for a while it seems with recent reports claiming the couple are “inseparable” and even making wedding plans. We’ll get our hats ready… 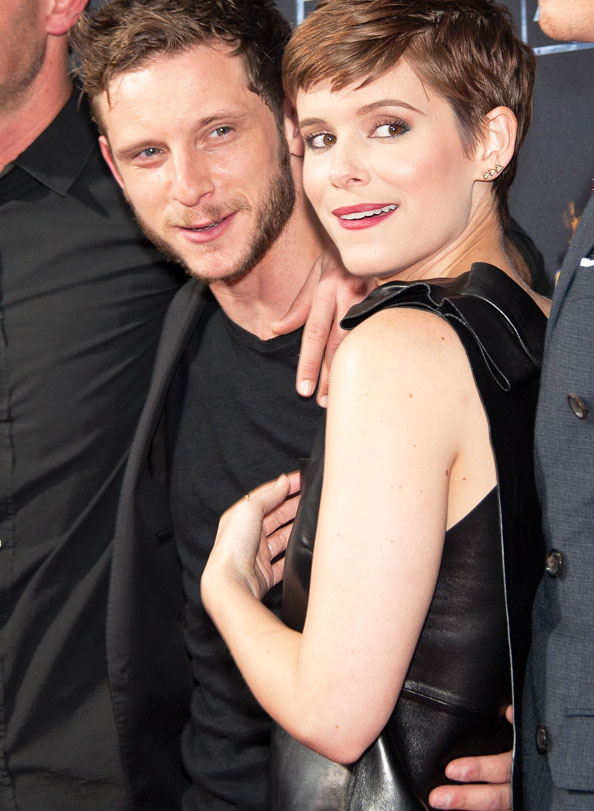 LOVE STORY: Kate and Jamie may be the only positive to take from flop movie Fantastic Four. Kate, 32, and Brit hunk Jamie, 29, met on the set of the box office bomb and have stuck together through the critical barrage the Marvel movie has received since release. The pair have been spotted strolling around New York looking more than just co-stars.

HOT ROMANCE RATING: 1/5 This fantastic two is a little like their flop movie – it promises much but in the end it falls rather flat. They may look cute as a couple but sources say that while there is chemistry between Jamie and Kate, they are most likely to remain the best of friends and no more. 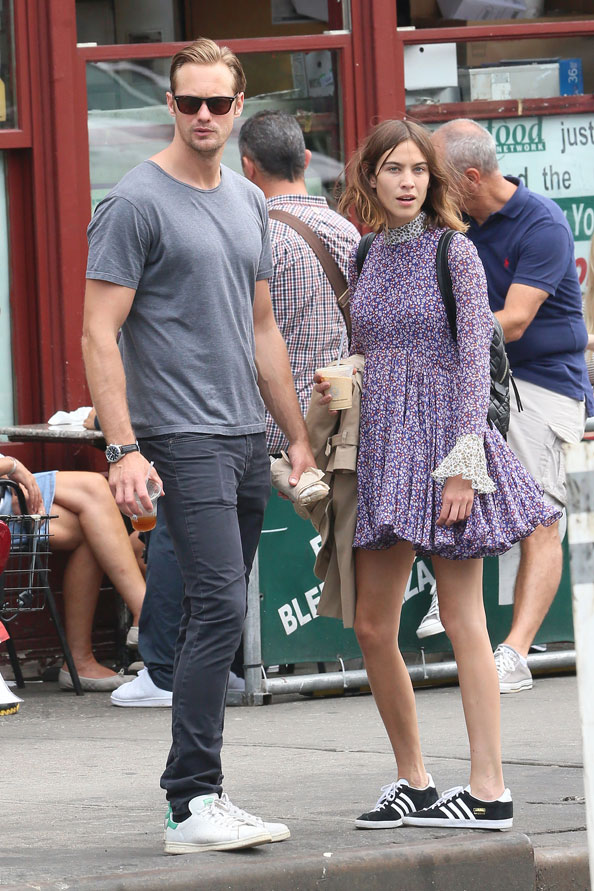 LOVE STORY: Style icon Alexa, 31, and Trueblood heartthrob Alexander, 38, first met at a gig earlier this year. Romance sparked in July when the couple were spotted “canoodling” during a trip to Brooklyn Botanical Gardens in Prospect Park, New York. Alexa and Alex have since been seen hand-in-hand on a number of intimate dates around the Big Apple.

HOT ROMANCE RATING: 3/5 This one is so top secret it doesn’t quite register as hot as it might. Even asked during a recent interview about Alexa, cagey Alexander failed to even show a hint of excitement about his girlfriend and instead just coldly answered with, “Who?” 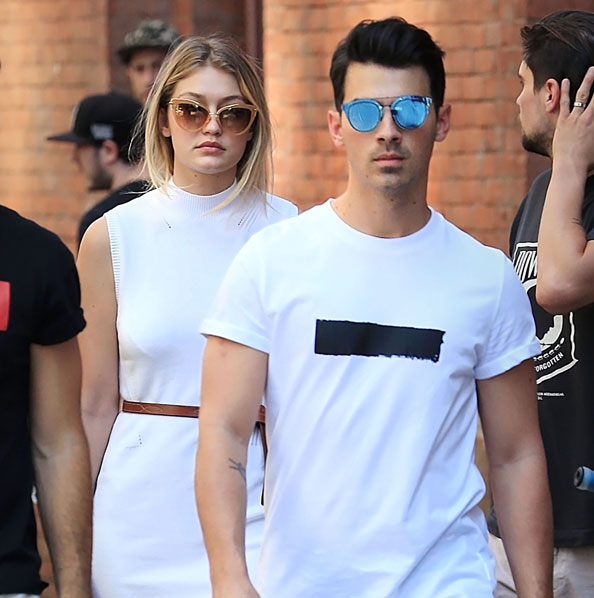 LOVE STORY: We mentioned this beautiful couple earlier with Joe and Gigi playing matchmaker to Nick Jonas and Kendall Jenner. Joe, 26, and the 20-year-old supermodel meanwhile have been going strong for more than two months now having first met at a fashion event in 2014.

HOT ROMANCE RATING: 4/5 The only thing wrong about this so-right pairing is just how fast things appear to be moving. Just weeks into their relationship and Joe is already making big plans for him and Gigi. “Joe has been telling friends that he wants Gigi to be the mother of his children — he really is convinced that she is the one,” an insider revealed recently. “He is head-over-heels and hasn’t loved someone more. She is it for him.”