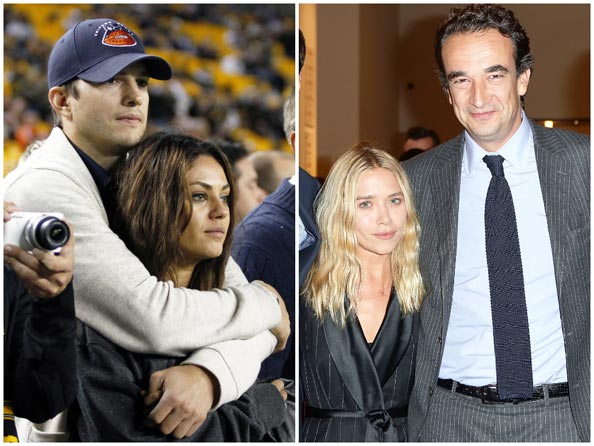 Hollywood is a buzz today with engagement rumours after celebrity insiders insisted that Ashton Kutcher had popped the question to Mila Kunis. But they’re not the only couple setting tongues wagging with hot gossip in Tinseltown insisting Mary-Kate Olsen is also getting married, to her older French boyfriend Olivier Sarkozy.

According to reports from Fox News, fashion entrepreneur and actress Mary-Kate got engaged to her beau of two years on March 1. Olivier, who is the brother of former French president Nicolas Sarkozy, first went public with his relationship with the pint-sized star back in 2012 and the couple are said to already be living together in a US$6.25 million townhouse in New York.

With the French banker being 17 years older than the 27-year-old, there has been much controversy surrounding their relationship. The marriage will be Mary-Kate’s first and Olivier’s second. He was previously married to Charlotte Bernard, a freelance fashion writer and author of children’s books.  The couple have two children together, Julien, 12, and Margo, ten

While Mary-Kate is closer in age to Olivier’s children than him, sources claim she has been a great influence on the French man, who has allegedly become much closer to his kids since their relationship blossomed. The Olsen family, including twin sister Ashley, are said to be over-the-moon with the announcement, believing the relationship is the best thing to have happened to Mary-Kate whose rumoured ex-boyfriends include Heath Ledger and Lapo Elkann.

News of Ashton Kutcher’s rumoured engagement to Mila Kunis will no doubt be upsetting to his ex-wife Demi Moore. The 30-year-old actress first sparked rumours after flashing a dazzling stone on her ring finger.  She also posted a picture on Instagram of her and Ashton kissing, with the caption: “Happily ever after.”

While the couple have known each other since 1998, when they starred as boyfriend and girlfriend in That 70s Show, it wasn’t until nearly a year after Ashton’s separation with Demi that they started a relationship for real.

Ashton married Demi in September 2005 and split in 2011. Their divorce was finalised in November 2013. Before dating Ashton, Mila was in  a long-term relationship with child star Macaulay Culkin from 2002 to 2010.

It’s time to dig out those hats ladies, it seems we have some weddings to look forward to.