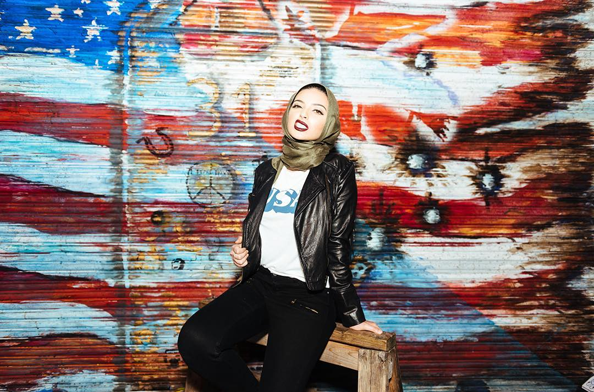 American journalist Noor Tagouri has become the first Muslim to appear in Playboy – a career move that has received a strong mixed reaction from fans.

The hijab-wearing Muslim journalist is at the centre of a controversial debate, with some critics arguing she shouldn’t have posed in Playboy‘s October Renegades issue. Fans however have started a hashtag supporting the star – #TheNoorEffect and #LetNoorShine.

Despite the debate, Tagouri has defended her decision to appear in the magazine, which used to feature naked women, stating it was part of her campaign to push back at the stereotype that Muslim women are “submissive” or “oppressed” because they wear a hijab.

The 22 year old shared her excitement about starring in the magazine by posting her images across her social media platforms.  “It’s here!” she exclaimed on Instagram to her 155,000 followers. “I’m honored to share that @Playboy has named me a 2016#Renegade and has featured me in their piece!!”

“…she provokes the sort of confusion we could use right now, in part by making a surprisingly bold case for modesty” 📸: @gokateshoot #linkinbio

In the shoot, which the multi-media star also vlogged about, Tagouri poses in a series of images which contrary to the criticism, are all modest and demure. In one she wears a leather jacket and stands in front of the American flag.

The Reason Why Men In Iran Are Donning The Hijab

“She provokes the sort of confusion we could use right now, in part by making a surprisingly bold case for modesty,” wrote the Playboy journalist.

The feature on Tagouri is a bold move for the magazine who moved away from sharing nude images in 2015. The story helps eliminate stereotypes and break down barriers.

“Being a hijabi Muslim woman helps me gain trust. I say, ‘I know what it’s like to be misrepresented in the media. I won’t do that to you.”

In one part of the interview the news presenter talks about racism and how people often tell her to “go back home.” “I was born in West Virginia,” she said. “I constantly remind myself to just do the work I believe in and ignore angry people behind computer screens.”

Tagouri, who currently works for Newsy, an American video news network, says her goal is to become the first hijabi news presenter on commercial TV in America. This is a promotion we see being just around the corner for the inspirational campaigner, who is already acting as an important role model for fellow hijab-wearing Muslim girls.

We have to live for the 10,000 who have come before us, who have made it easier for us to get to where we are today, but also for the 10,000 coming after us, so we can continue to break barriers and glass ceilings and reclaim our power. 📸: @gokateshoot

“I will have succeeded in effecting change when all girls realise they can do anything they want without having to sacrifice who they are as a person,” she said in her Playboy interview. “I may dress a little different – I’m a reporter who happens to wear a head scarf – but being a story teller, motivational speaker, entrepreneur and unapologetically myself has opened so many doors for thousands of people.”

#TheNoorEffect has won us over for sure. For more inspirational stories where Muslim women are making a stand, read here.

It’s here! I’m honored to share that @Playboy has named me a 2016 #Renegade and has featured me in their piece!! *LINK IN BIO* 📸: @gokateshoot