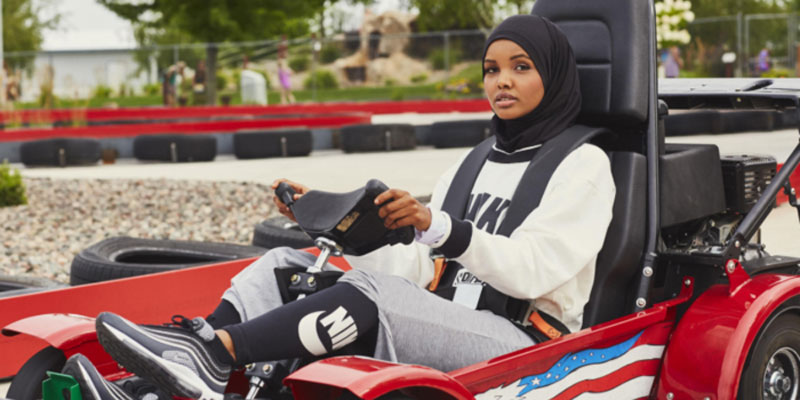 “My life philosophy is: If I did well yesterday, I could do better today.”

Somali-American model Halima Aden is one of our favourites, and she’s just hit another major career milestone.

The 19-year-old beauty has landed a Nike campaign just months after appearing on her first major US magazine cover.

Aden appears alongside other creatives who were born in 1997 to celebrate 20 years of the Air Max 97 sneaker.

Aden, who has walked for brands including Alberta Ferretti and Kanye West’s Yeezy, was photographed for the campaign in a go-kart and at a baseball batting cage. In the text that accompanies the images, the model reveals she’s focused on personal growth.

READ:
Halima Aden: ‘My hijab is a choice’
Halima Aden makes history as this US magazine’s first hijabi cover star

“There’s always room for improvement. My life philosophy is: If I did well yesterday, I could do better today,” Aden says.

Aden joins celebrities such as Bella Hadid and Serena Williams as spokesmodels for the brand.

There’s always room for improvement. My life philosophy is: If I did good yesterday, I could do better today. Even with these shoes, Nike is not thinking for the customers today, they’re keeping in mind the customers 10 years from now, 20 years from now, 60 years from now. What is that brand going to be remembered for? I’m excited to share with you these images created for @NikeSportswear’s #ad #AirMax97 Ultra. #Movement97

The teen has had quite the year after shooting to fame in 2016 after competing in a US beauty pageant wearing a burkini.

The Muslim model, who was born in a refugee camp in Kenya,  has since landed a contract with agency IMG Models.

Aden spoke out about her rise to fame in a recent interview, revealing she was “never expecting” to forge a career in the fashion industry.

“If I can give that opportunity to a girl, where she can flip through a magazine and see someone dressed like her, or someone who looks like her or has a similar background, I think that’s important.”