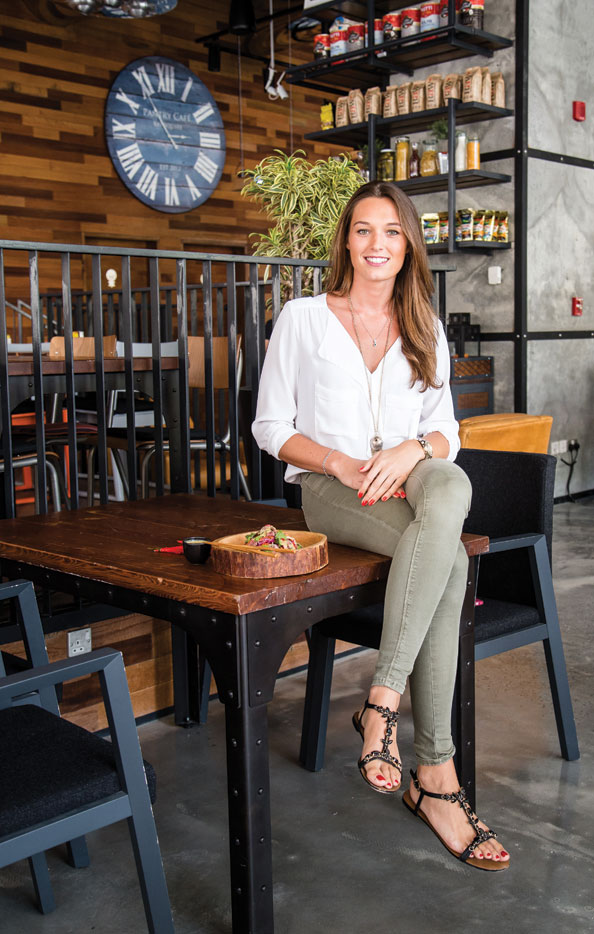 If you whipped up a green smoothie before you left the house this morning, or if you’re snacking on raw cacao balls as you read this feature, then you might want to add Lean Living Girl’s website to your bookmarks.

Rothman is eager to follow in the footsteps of vegan blogging sensation Ella Woodward (aka Deliciously Ella), Get the Glow’s Madeleine Shaw, “nourishing” chefs the Hemsley sisters and others who are leveraging a rapidly expanding online fandom (collectively these girls have a million strong army of Instagram followers) into TV appearances, publishing deals, product lines and pop-up restaurants. Women haven’t caused this much of a sensation in the kitchen since Nigella showed us How to Be a Domestic Goddess.

But things have changed since Lawson was padding around her fairy-lit kitchen late at night. You won’t find the current crop of cooking queens licking buttercream from a spoon in their nighties for a start. Dairy is pretty much a dirty word these days, and midnight snacking won’t fly when you’re up at the crack of dawn for yoga; spirulina smoothie in one hand, smartphone in the other.

“Social media is so important, especially here in Dubai,” says Rothman, who quit her job in PR to focus on Lean Living Girl full time, “Instagram is huge.” Carly has already amassed over 16,000 followers thanks to some seriously appetising snaps of her healthy creations, interspersed with fitness tips and motivational quotes. Fittingly, for a member of today’s increasingly popular culinary crew, the beaming brunette is the picture of good health.

“I actually had a massive sweet tooth as a kid,” says Carly. “My parents were always very health conscious, but they weren’t overly strict and we made our own choices. I think what kick-started it was going to university and suddenly being surrounded by fast food; I had to start bringing my own, homemade stuff in. I wouldn’t say I was ever overweight, but I’m not someone who can eat whatever I want and look amazing,” she says.

Carly started experimenting in the kitchen and quickly fell in love with clean eating, a passion the qualified personal trainer combined with her love of fitness to create Lean Living Girl. Her recipes are virtuous, but Carly maintains she’s “all about the guilt-free lifestyle”. “I’ll go out and enjoy myself,” she says. “I won’t eat 10 bowls of chips, but I don’t restrict myself. I’m not that girl.”

There’s no sugar in Madeleine Shaw’s kitchen either, but the blonde beauty behind Get the Glow agrees the occasional treat is no bad thing. “It’s not like I’ll never have a piece of cake,” she says, “But I genuinely don’t feel like I’m depriving myself eating the way I do.”

The London-based 25-year-old has a headstart on Rothman on the Instagram front (144,000 and counting), and is just as emphatic about the role it plays in her career. “Social media is a huge engagement point,” says Shaw, 25, whose food and fitness philosophy promises to help “enliven the hottest, healthiest, happiest you”. “We spend so much of our lives on it now. It’s important to be visual.”

While her vibrant super-food salads and colourful soups are a feast for the eyes, Shaw herself is perhaps the best advert for her lifestyle. Any resultant rush on Nutribullets by visitors to her site is as much down to the pictures of her – looking luminous as she shops for fresh produce or executes a flawless crow pose – as it is her food. Like many of her fellow healthy eating champions, Shaw credits her switch to whole, unprocessed foods with transforming her health. “I used to have really bad digestive problems,” says Madeleine, who, difficult though it might be to believe now, suffered with dull skin, lank hair and low energy levels as a result. “I was really tired all the time. I went to lots of different doctors but it wasn’t until I moved to Sydney, started working at an organic café and changed my diet that everything changed.”

Shaw ditched the sugar and wheat and hasn’t looked back, claiming that anyone doing the same can expect to see the benefits almost straight away. “Within a week if not less,” she says. “It does depend on the person; if you’re a real sugar monster you might get a bit of a detox effect, but after that you’ll feel so much better.” 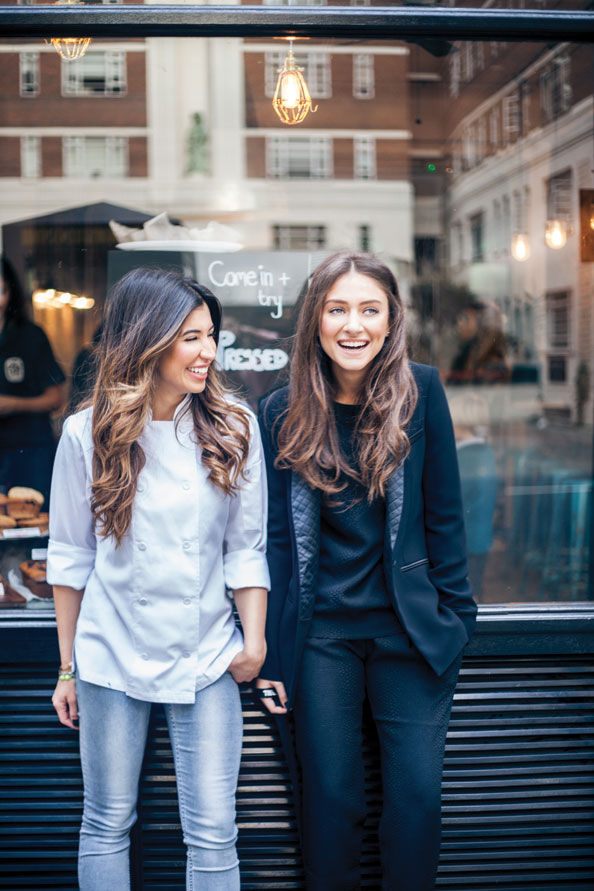 Also riding high on the wellness wave are Iranian-American duo Shirin Kouros and Yasmine Larizadeh, who brought LA-style cold-pressed juices, nut milks and health foods to London with their Chelsea café The Good Life Eatery. They too say they have social media to thank for the success of their concept, which has already built up a celebrity following and spawned a second restaurant in Marylebone.

“It launched us, for sure. We didn’t really do any advertising,” says Shirin, who describes business partner Yasmine as a “social media genius”.

“We believe it’s important for people to know there are real people behind the brand, who care about the quality of the product.” It doesn’t hurt when stars are spotted tucking into their egg white frittatas either. “We’ve had quite a few famous faces in,” Shirin says, reeling off a list of names that includes Zoë Saldana, Adele, Eva Herzigova and Hugh Grant. 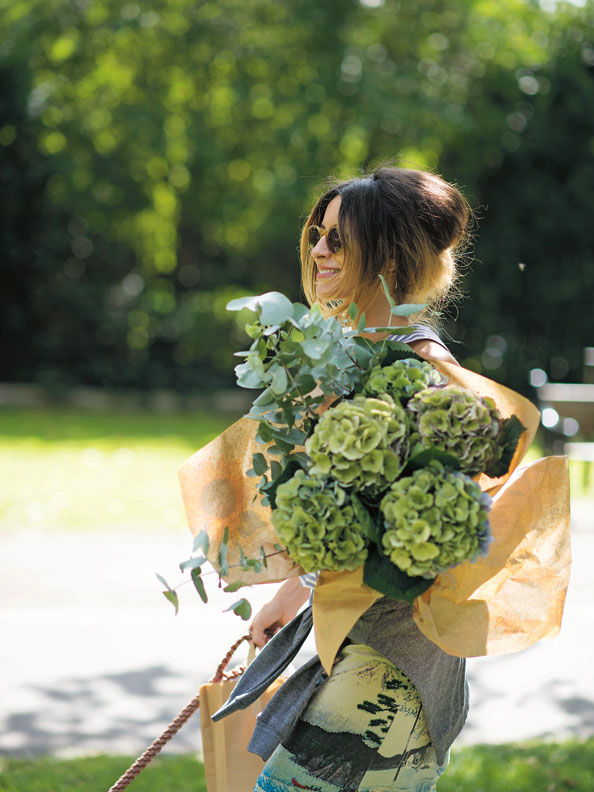 Over on the other, grittier side of the city is Anna Barnett. A former celebrity booker, long-time member of the House of Holland team and an obsessive cook, the dinner parties Barnett threw at her East London home became notorious for the food as much as the hipster guest lists (think Nick Grimshaw, Pixie Geldof and Florence Welch). It led to a blog, Get In My Gob, which has since become a highly addictive website, and a cookery book, Eat The Week.

If there is a rebel in the hot new wholesome set, it’s Anna. There’s an emphasis on vegetarian cooking (a skill honed thanks to her non meat-eating boyfriend) and you’ll find super-food salads, lentils and brown rice on her website, but Barnett’s dishes are less about adhering to a certain lifestyle, more about having fun with food. Even the most maligned of modern ingredients, sugar, makes an appearance in her gingerbread ice cream with panettone waffles.

“For me it’s about moderation,” says the stylish 29-year-old. “I think there’s always room for a treat, especially at a dinner party. That said; there are so many delicious meals to be made from seasonal and healthy ingredients that it’s easy enough to meet in the middle. The current wave of interest in the healthy, vegan lifestyle is super interesting, but I like more of a mix of indulgent and healthy,” she adds. Her Instagram is testament to this, featuring a prawn mac and cheese photo one day and a gluten-free quinoa dish the next.

The crucial thing all of these women have in common – aside from their radiant appearance, boundless supplies of energy and vast social media followings – is that they don’t count calories. Proof, perhaps, that you can have your cake and eat it too. Just try to make it dairy-free.