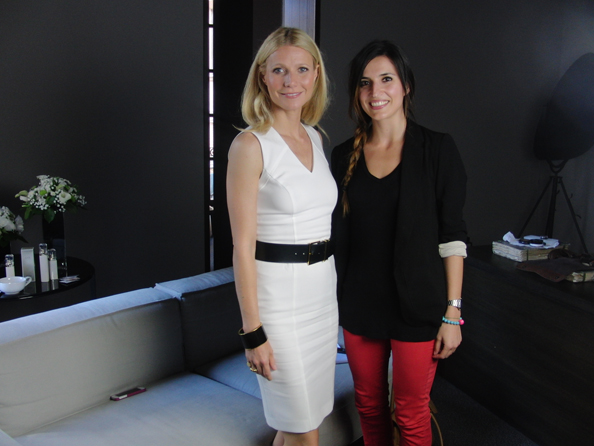 It’s not exactly rare for celebrities to fall out with magazines. Heck, as a former tabloid journalist I’ve heard and played witness to many disgruntled stars ready to unleash some legal action in a bid to hold back salacious gossip and dark secrets that may or may not be true – don’t always believe what you read. However, what makes the current feud between Gwyneth Paltrow and Vanity Fair a bit odd is that this magazine is considered a prestigious one, a title that doesn’t partake in the usual tittle-tattle, which leads me to wonder: just what on earth has Gwynie done.

Anyone who reads the June 2013 issue of Emirates Woman will know I interviewed the svelte 41-year-old in person. What was she like? Was the resounding question almost everyone, including my husband, asked. “I’m really not sure,” was my disappointing reply. The fact is I pride myself on being a good judge of character but while Gwyneth was polite, to a point, (she did initially refuse to shake my hand, only relenting when I refused to move) I couldn’t help but wonder whether it was only because she is incredibly PR savvy after 23 years in showbiz and has a tenacious agent (she really does). Does she put on an ‘act’ for the media interviews or does she hold back, reluctant to reveal her true self because she has something to hide?

Of course, the forthcoming article to be published in Vanity Fair (exact issue still to be confirmed) obviously thinks the latter. The article is thought to be revelatory with some sources suggesting it might unearth alleged affairs.

This sounds like tabloid fodder to me, so why is Vanity Fair stooping to this? Is this perhaps the final proof that the power of the celebrity is dwindling?

Publishers and editors are tiring of celebrities calling all the shots. Most stars want the publicity but only on their terms and after they and ‘their people’ have had final approval, which can take weeks, months even longer. Freedom of press has become more freedom of celebrity to express what they want, when they want.

I can understand this to an extent, it must be horrible to live your life under a global microscope but at the same time, when you sign up to be in the spotlight you must be aware that you’ve also signed off a little bit of your soul to the tabloids and press in return.

In the 1970s, photojournalists and writers produced some of the most fascinating articles about our heroes, who did in fact seem heroes because they allowed us access. It was a time before PR took over. Celebrities were honest. What you saw was what you got whether it was Sid Vicious or The Beatles. Fans felt like they knew them. Fast-forward to today, however, and the stars are so closed off, so secretive that if you dare to reveal a story that exposes anything other than what they want you to know, you’ve every chance of seeing their lawyers.

The feud with Vanity Fair reportedly started after Gwyneth, who married Coldplay singer Chris Martin in 2003, was unwilling to be profiled in the magazine after its recent unflattering stories on several stars, including a profile in 2012 of Tom Cruise. The actress retaliated by sending a personal email to her A-list pals, saying: “Vanity Fair is threatening to put me on the cover of their magazine. If you are asked for quotes or comments, please decline. Also, I recommend you all never do this magazine again.”

Vanity Fair editor Graydon Carter said her actions “forced my hand”.  “We started a story on her. We have a very good writer and it’ll run,” he said in a recent interview. “We wouldn’t be doing our job if there wasn’t a little bit of tension between Vanity Fair and its subjects. In any given week, I can expect to hear from a disgruntled subject in Hollywood, Washington, or on Wall Street. That’s the nature of the beast.”

And this beast is ready to pounce and potentially damage Gwyneth’s squeaky clean, dairy- and gluten-free image – it’s reported Vanity Fair is looking into allegations that the mother of two had a relationship with wealthy real estate developer, and Elle McPherson’s current beau, Jeff Soffer in 2008.

So who will win the battle? I think neither party. Vanity Fair have perhaps slipped a little in having to dig the dirt, but, at the same time, if celebrities (yes, this includes you, Gwyneth) were a little more willing to accept that publicity is part of their job and cut us all a little slack, then perhaps this fight wouldn’t even have begun.