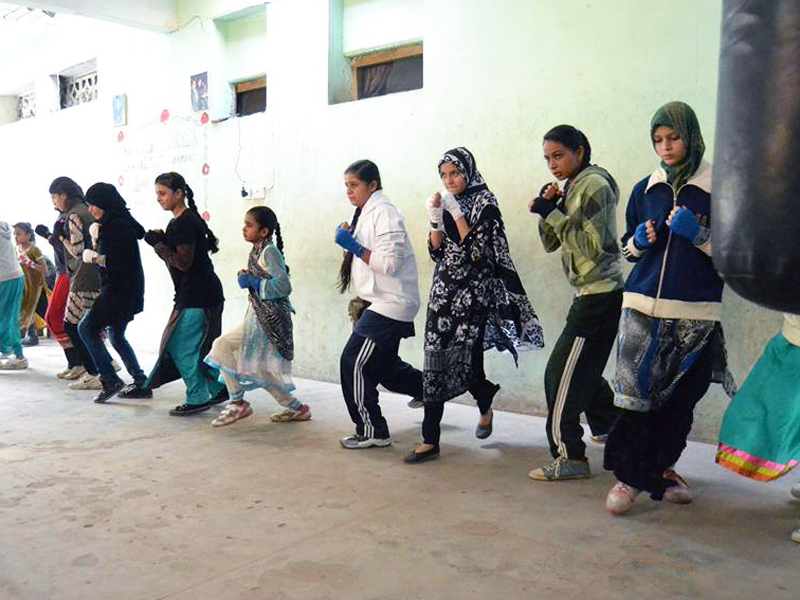 A group of girls in one of Karachi’s poorest and most dangerous areas are being trained to fight in Pakistan’s first ever all-girl boxing club.

The energetic teenager, one of 18 members of Pakistan’s first ever all-girl boxing club, is nothing if not confident. She asks more questions than she answers and stands proudly beside Younus Qambrani, chief coach at the Pak Shaheen Boxing Club in Karachi’s Lyari district. “Who do you work for? Where are you from? What is your name?” she asks. “You want to talk to my coach? He can’t understand you. I’ll translate for you.”

She does so with a level of energy that only a teenager possesses. She is also, by now, accustomed to the attention. Since the girls’ club was launched in October last year as an extension of the existing boys’ club, the level of international interest has steadily grown. Perhaps more so because of the location and the conditions in which they train. 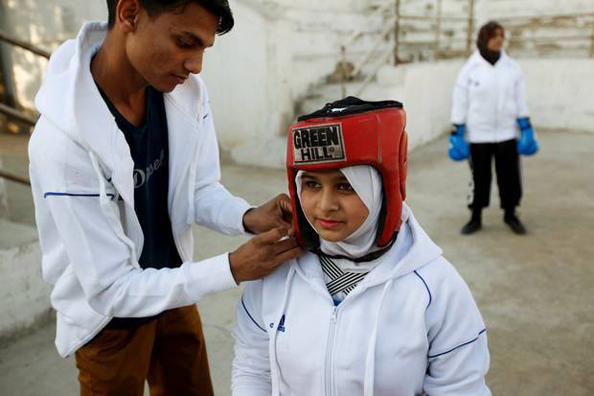 A girl fighter gets fitted up before a boxing match

Lyari is portrayed as a crime-infested hell-hole plagued by poverty and gang wars. Read the headlines if you disagree. ‘Brother of slain Lyari gangster netted’; ‘Lyari gang war: five suspects given bail’; ‘Lyari gang war leader Uzair Baloch arrested by Rangers near Karachi’. The latter epitomises the scale of the problem facing Lyari.

In January this year, Pakistan Rangers arrested Baloch, the self-styled don of Lyari, as he attempted to enter Karachi. It was unclear how and when he had arrived in Pakistan, having previously been arrested by UAE authorities attempting to cross the border from Oman in December 2014. He faces charges of target killings, extortion, kidnapping and terrorism.

Baloch represents a deeply embedded criminal fraternity. Described as both a ‘criminal politician’ and a ‘gangster’, he is a former chief of the now defunct Peoples’ Aman Committee, a militant group tied to the Pakistan People’s Party, and one of numerous criminals targeted by the authorities in Operation Lyari. Initially launched four years ago, and ongoing since September 2013, the operation is a bloody and often vicious government crackdown on gangs and other crime syndicates.

It is within this environment that the girls attempt to box. Their surroundings are basic and their exercises rudimentary. They train in a long rectangular room with ventilation brickwork high up on one side and bare breeze blocks below. The star and crescent of the Pakistani flag hangs from the ceiling at varying intervals, and at the far end of the room a single set of stairs rises to the second floor.

Outside, infrastructure is limited, medical care is poor, and few of the girls, if any, have personal transport. 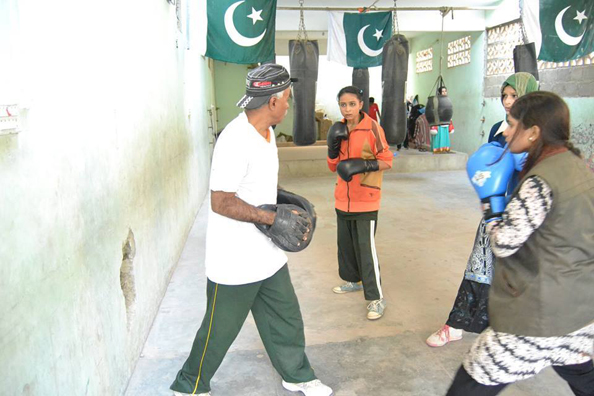 “Misbah is one of our strongest boxers,” says Mohammad Hussain Qambrani, the club’s president and Younus’ brother-in-law, a week or so later. “Some of the girls travel three to five kilometres a day on public transport to get here because they cannot afford their own transport. They are all keen to become international boxers. But it is not true that our area is filled with crime. It is filled with peace-loving and law-abiding people.”

“All these girls are talented,” adds Younus via a mixture of translated conversation and Facebook Messenger. “We have no financial resources to train them with the latest equipment, but we train them well with old and second-hand equipment and what we have. They are eager to be here, to build their career, and to serve their country. And, if nothing else, at least they learn self defence if they cannot qualify for open bouts.”

Of paramount importance is confidence, while the club’s single key rule — that they must remain in education if they want to train to be boxers – is strictly adhered to. They arrive each day after school and pray before training. Their exercises are simple, occasionally incorporating small hand-held weights, and they weave and jab when the teaching of form and technique begins.

When we talk, Younus and Hussain’s language is sporadically antiquated. Their sentences are sprinkled with words such as ‘pugilist’ and ‘peon’ and they remain focussed and determined despite limited means. Younus earns US$200 a month via local government employment, while Hussain, who is retired, receives just US$30. “I have no other source of income,” admits Hussain. “We do not charge any fee for training and we work sincerely to build the health and career of the girls and the boys.”

It is in order to give the girls a better chance at life and to encourage equality that the club was established. 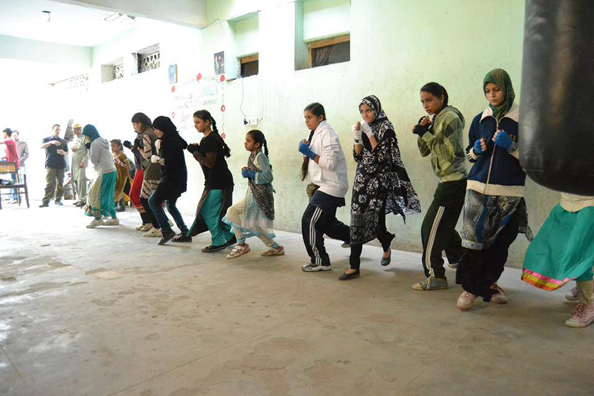 “Younus had already been training his two daughters, Anum and Urooj, since their childhood,” says Hussain. “Both are interested in becoming boxers at an international level, like their two uncles Majid Qambrani [a gold medallist at the South Asian Games] and Rashid Qambrani. But there were more girls in the vicinity who were also interested in learning to box, but at that time we were not in a position to start girls’ boxing camps due to the cultural environment.”

That changed in the middle of last year when Asghar Baloch, secretary of the Sindh Boxing Association, contacted Younus and said he was negotiating with the government of Sindh to organise a women’s boxing camp. Younus was invited to join this mission.

“There was, however, a very serious situation in the field of women’s boxing at that time due to the cultural environment,” says Hussain. “Younus was afraid of the adverse reactions of people in the area. He discussed the matter with me – I was also a boxer in my teenage years – and at first I refused to put the girls at risk. But subsequently I agreed, at least for their own self defence.

“We faced all the cultural barriers and convinced the parents and some of the influential people in the vicinity that it was good for the girls’ future and would be done within the boundaries of Islamic law and cultural ideologies.”

Has there been any adverse reaction since the club opened? “No. No adverse reaction has yet come up, but we can’t say what will happen in the future. However, we shall try to face everything with moral codes and ethics.” 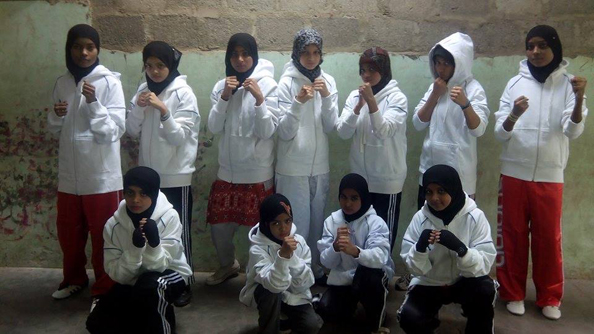 Eighteen girls are currently training at Pak Shaheen Boxing Club. All are between the ages of nine and 17, come from poor and underprivileged backgrounds, and strictly adhere to Islamic and local cultural mores. Although most live nearby, some travel from as far afield as Korangi, a town in the eastern part of Karachi.

Amongst the fighters is Anum, Younus’ 17-year-old daughter. Several older male members of her family box, so it wasn’t too hard for her to get permission to train, says Anum, but some cousins initially poked fun at her. “You? You’re going to fight? They stopped making fun of me when I started winning fights,” she says. “I’ve had uncles who have competed in the Olympics. They were trained by my father and many of the men my father has trained have also joined the army and other forces, or are Rangers. All from our club.”

One of Anum’s uncles, Rasheed Qambrani, was only 16 when he competed in the Olympics in Atlanta. “People were so angry at my father for allowing him to fight at that level at such a young age,” says Younus. “‘You want to get him killed?’ they asked. Support from family is crucial. Most of the girls have had some male family member in the boxing world, so it’s relatively easier for them to accept a girl’s interest to join. There are two or three girls who don’t have any other family members involved in boxing, but just have a passion for it.”