It was her first time hosting the American Music Awards, a job she considered an “honour”.

However Gigi Hadid has now been forced to defend her presenting turn after being widely criticised for a controversial impression of the incoming First Lady of the United States, Melania Trump.

The half-Palestinian model adopted a fake Eastern European accent during a skit to poke fun at Donald Trump’s wife, who hails from Slovenia.

“I love my husband, President Barack Obama. And our children Sasha and Malia,” the 21-year-old joked, while pulling Trump’s signature pout, in reference to Melania’s Republican National Convention speech.

In it, Trump was accused of lifting direct quotes from a speech given by current First lady Michelle Obama in 2008.

Shortly after the awards aired, the model was derided on social media, with many calling her impression “racist” and accusing her of bullying the soon-to-be FLOTUS.

“Disrespectful, and should be ashamed of yourself!” one commenter wrote on Twitter, while another said: “I’m not a Trump fan at all but Gigi Hadid’s frankly racist impression of Melania Trump is really unacceptable.”

Hadid, who was in Dubai just last month to launch her collaboration with Tommy Hilfiger, posted a handwritten apology to her Twitter page after the outrage.

“I removed or changed anything in the script that I felt took the joke too far, and whether or not you choose to see it, what remained was done in good humour with no bad intent,” the model said.

“I too have been the centre of a nationally televised comedy skit that poked fun at my actions, and was able to find the humour in it.”

The politician’s wife has so far made no comment on the impression, which aired in the US on Monday. 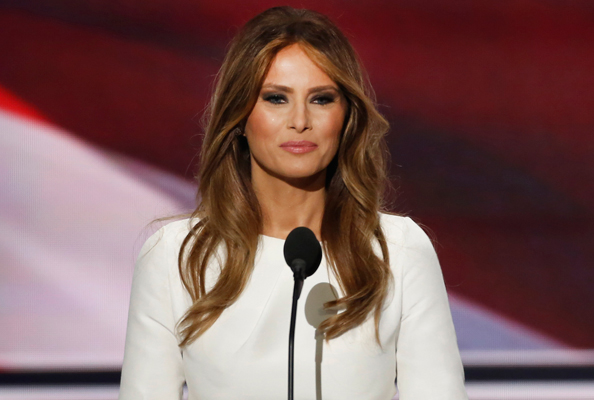 “I apologise to anyone that I offended and have only the best wishes for our country,” Hadid signed off.

The model’s co-host on the night, comedian Jay Pharoah, backed her up, saying on his Facebook page that they “exaggerated a speech that actually happened, where Melania clearly plagiarised”.

“Over the last eight years the beautiful Michelle Obama has been the victim of excessive slurring,” he wrote.

Whether you feel it was a joke made in good fun or offensive mocking, it’ll probably be a while before Hadid braves another presenting gig…