Get In Shape Like Emily Blunt | Diet and health secrets Emily Blunt is certainly at the top of our body wish lists for 2015! Despite giving birth to her daughter, Hazel, back in February, the 31-year-old actress took to the red carpet, in December, for the Dubai International Film Festival (DIFF) to flaunt her fabulous post-baby physique. The British actress has also been spotted out and about promoting her most recent film, Into the Woods, looking leaner than ever and making heads turn in Hollywood. Here’s how she has done it…

At 1.71m (5ft7½ins) and weighing 52kgs, her trim figure is the example of healthy eating, intense exercise and a well-rounded routine. In this week’s #EWGetsFit, we reveal Emily’s diet and health secrets.

Whilst preparing for her physically demanding film role, Edge of Tomorrow, Emily turned to her personal trainer, Jason Walsh. The tailor-made programme focused heavily on mobility, flexibility and base strength, centred on a well-rounded routine of sleep, hydration and nutrition.

Emily Blunt flexing her muscles in Edge Of Tomorrow

The LA-based trainer, has also worked with other A-list celebrities including Jessica Biel, Jennifer Garner and Natalie Portman. Due to Emily’s fast calorie-burning exercises, she began eating healthily and in moderation. Her diet was concentrated around carbohydrate-filled breakfasts, grain proteins and probiotics for lunch and dinner. “I wasn’t eating kale chips or anything, I was doing alright,” said Emily whilst speaking about her recent weight loss. She also opted for gluten-free options when possible and limiting herself to one cup of coffee a day (we couldn’t believe it either!) 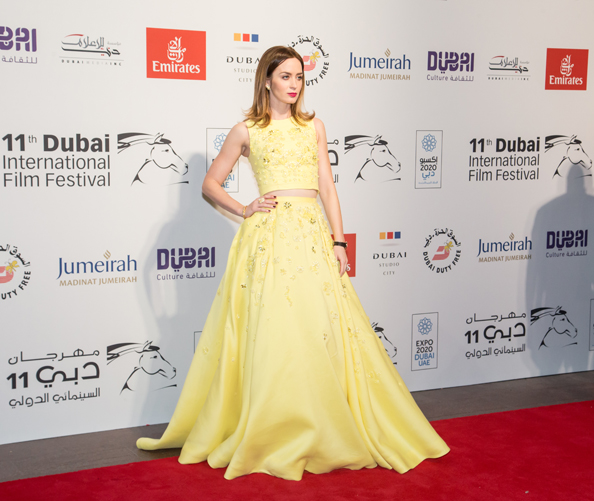 Emily Blunt looking dazzling on the red carpet at DIFF

“My new healthy regime is basically trying to cut out things like pizza — I’m working out, and I’m cutting out pizza.”

EXAMPLE OF MEALS (BASED ON THE JASON WALSH PROGRAMME)

Emily’s trainer, Jason Walsh, uses a three-part circuit workout on all of his celebrity clients. He focuses on getting the heart rate up and toning your inner base strength.

The circuit lasts for 25-30 minutes (not including resting time) and requires easy-to-use equipment such as dumbbells, a small step and a pull-up bar. Emily made this part of her daily regime six days a week, dedicating two-and-a-half hours a day refining her core strength and admitted: “It was brutal at first and then became addictive.”

Walsh’s training session begins with 5-10 minutes of light cardio and stretches. Then the set is repeated three times with rests for 60 seconds between each. Certainly not for the faint hearted, Walsh also promotes Pilates and yoga, for up to two times a week.

Whilst speaking to hollywoodlife.com Emily said: “I’ve been working out more recently”

“I really like doing Pilates as well and yoga and all those lengthening exercises … probably like four, sometimes five times a week!”

“That’s a lot of cardio. It’s the most cripplingly difficult, [but] I actually enjoy it!”

One thing is for sure, she’s not dieting like her character in Devil Wears Prada