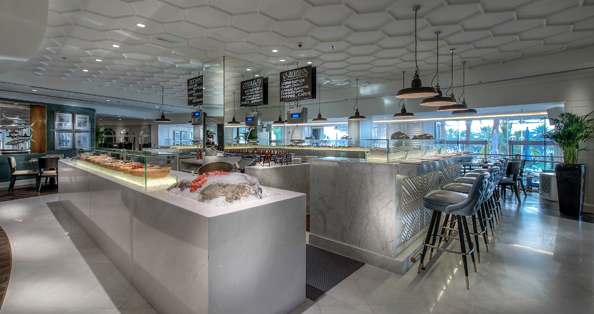 Billed as “London’s favourite neighbourhood fish restaurant” Geales, which has branches in trendy Notting hill and Chelsea Green, has now found a third fashionable location in which to spread it’s wings. Located in the Royal Meridien Beach Resort and Spa, the UAE import immediately scores points in that it is slap bang on the beach – beat that gloomy London! Geales is themed around a British chip shop, but while the brand claim to deliver good old-fashioned food with “no frills”, this is Dubai, so there is always going to be a certain degree of glitz and glamour.

If Jean-Paul Gaultier did restaurants he’d be incredibly impressed with both the interior design and the waiter’s striped sailor’s jerseys. The bad boy of the fashion world would adore the black and white nautical theme with hexagonal shapes used absolutely everywhere from the gleaming tiled floors to the textured ceiling to the fabric on the armchairs, the leather on the bar and the gold art deco side tables in the lounge area. The Frenchman may not be as keen on the Union Jack cushions, but he’d appreciate the humour in the mini blackboards and spoof news stories in the newspaper used to present some of the fried dishes. There’s a rectangular marble counter if you prefer a more casual affair or booths in more private alcoves. The outdoor area, which edges onto the pristine laws overlooking the sea will be the spot to pull up a pew in the winter months. 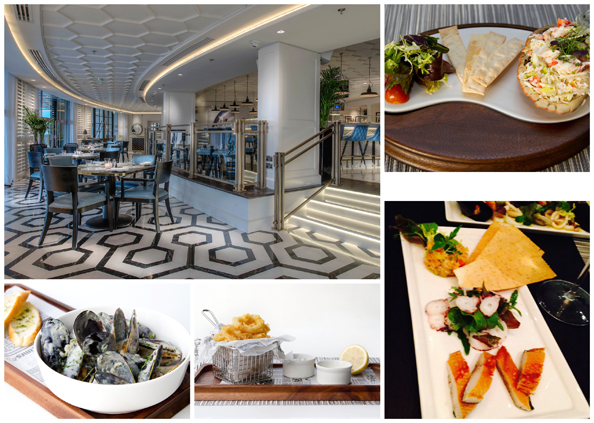 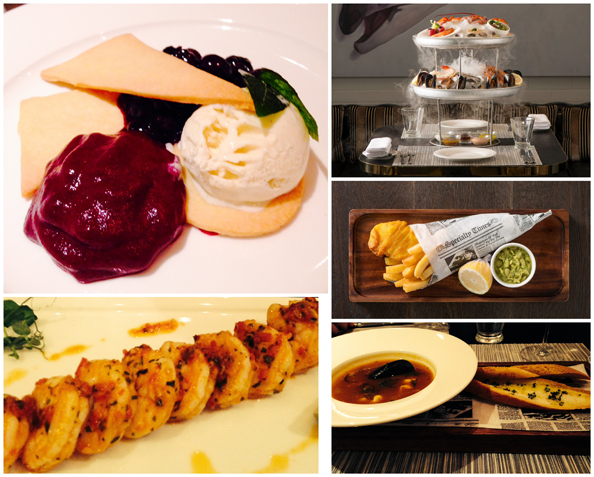 The same adjectives used to describe Jean Paul Gaultier’s style can be employed when it comes to the food: bold, excessive and colourful. If you’re a lover of crustaceans then you simply must order Geales’ Royal Tower – for two, four or six diners. Caribbean lobster, white prawns, fin de Claire oysters, scallops and mussels are presented like a posh high tea on a three-tiered cake stand. Lip-smackingly fresh and remarkably generously proportioned, we could easily have stopped there. But there was still silky sashimi – the rosy pink tuna was exceptional – smoky mackerel, slivers of octopus and a lively tartare.

For mains the classic fish and chips – served in ‘Speciality Times’ newspaper is a winner – you can taste the earthy malt in the fish batter and the thrice-cooked chips will quickly break your carbs embargo. Desserts don’t come more British than buttery homemade shortbread with vanilla ice cream and a rich berry compote.

The service was very friendly – the front of house were particularly charming. It appears that things are still warming up at Geales so the restaurant wasn’t buzzing, but we’re sure things will pick up once the word is out.

You’ll be hard-pressed to find a restaurant in which to drop anchor for the evening where the décor has been so carefully thought out.

The quirky touches. We’re convinced you’ll discover something new in the design every time you visit.