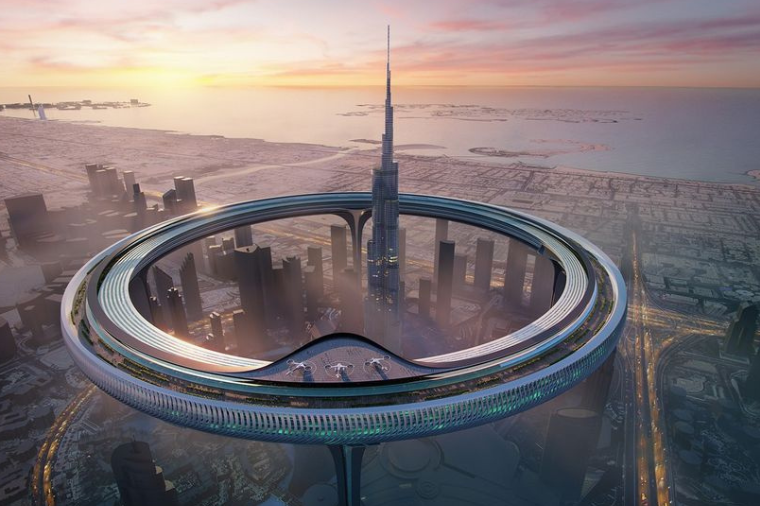 When it comes to record-worthy structures Dubai has undoubtedly made its mark on the global map.

Now a new futuristic project designed by a Dubai-based architecture firm has been unveiled with a radical plan to transform the emirate’s skyline.

Znera Space, founded by Najmus Chowdhry, released a series of photos on Instagram outlining the project which features a circular megastructure surrounding the Burj Khalifa, suspended half a kilometre above the ground level of Downtown Dubai.

The architects have proposed a giant 550-metre tall ring that will have a three-kilometre circumference supported by five massive pillars. The span of the circle will consist of two rings that will be held together by a continuous green belt named the Skypark.

The project was coined by the architects during the COVID-19 pandemic in a bid to combat the density of Dubai living, championing the notion of “vertical urbanism”.

“As a response to the dilemma of how to build densely while retaining liveability, the downtown circle project establishes a sustainable and a self-sufficient vertical urbanism,” the founders said on Instagram.

With sustainability as its main requisite, the mega-complex “aims to create a hyper-efficient urban centre that gives back to the environment”.

Skypark will act as a support to this impressive structure by bringing nature to life. Featuring swamps, waterfalls, tropical vegetation, and more, the concept will focus on sustainability through rainwater harvesting, solar power and filtering pollutants for clean air.

With 360-degree views of the city, a tram on the outer perimeter ring is also part of the concept with twenty spacious pods travelling up to 100 kilometres per hour, conceptualised in collaboration with Pictown.

If the project does ever get the green light, would this be a place where you’d consider living?