Real-Life: How I Found Love In The UAE 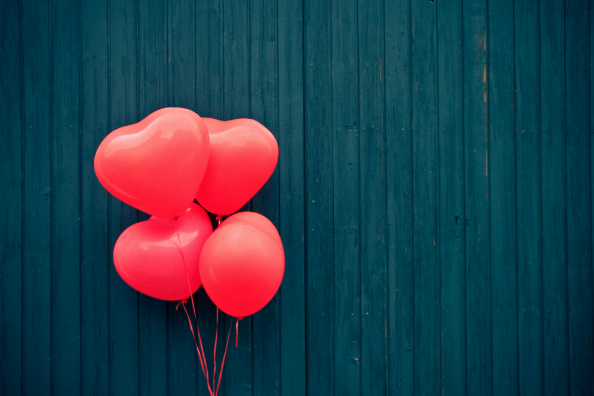 Finding Mr Right is no easy feat, and for some reason finding him in the UAE seems harder than in many places, but  it’s not impossible…

Proving you can find love in the UAE, four Emirates Woman readers reveal how they discovered ‘the one’ – tissues at the ready…

‘We Were Set Up By Friends’

The Farmers have been together for five and a half years. Married for just over two years, they have a one-year-old baby girl, Phoebe, together. 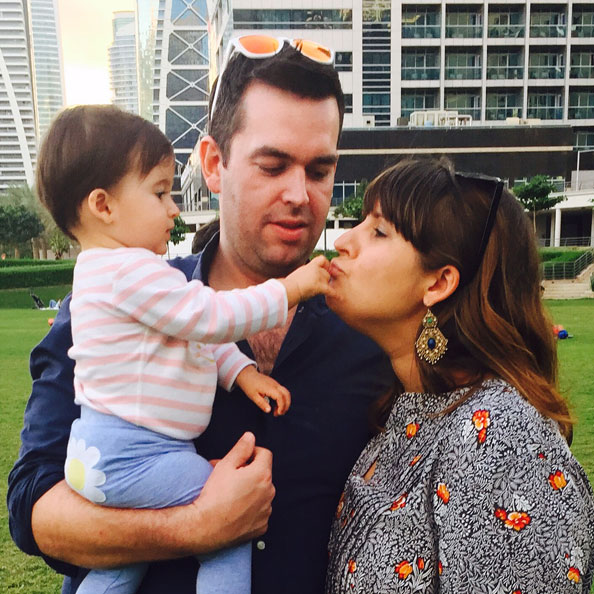 How long were you single before your met your husband? About a year.

What did you love about being single? I loved living alone and not having to think about someone else’s schedule.

… And what did you hate about it? Going to events alone.

What was the most annoying question you faced when single? When are you going to settle down?

What was it like being single in Dubai? It was fun, until it stopped being fun because I wanted to meet someone. Men in Dubai are an interesting breed – happy to enjoy the holiday atmosphere and stay single. 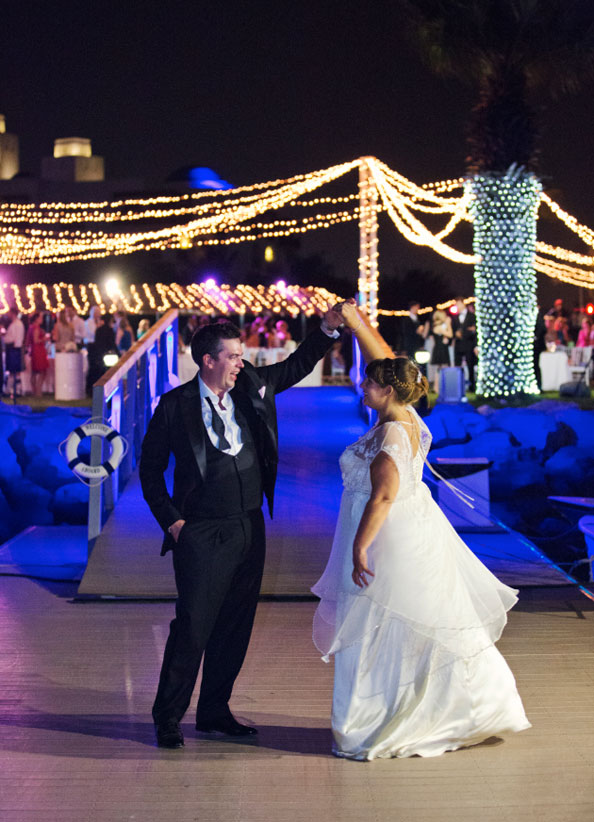 Helen and Nick on their wedding day

Where would you go to find Mr Right? Anywhere with big mixed groups.

Where did you meet your husband? We were set up on a blind date by our respective colleagues. They gave Nick my email address and he sent an amusing message. Then we BBMed back and forth before meeting a week later.

What were your first impressions? He seemed quite shy, but he was funny and clever. He was also wearing a great suit.

What did you do on your first date? We went to Ruth’s Chris Steakhouse then had drinks at Okku until 2am (on a school night).

When did you know he was Mr Right? After he dropped me home on our first date. On our second date he cooked, bringing two shepherd’s pies to my apartment – one for that night and one for the freezer. Keeper.

How did he propose? I was in my pyjamas when he made a lovely speech about us being stronger together. It was spontaneous, personal and very us. And our dogs were there watching. 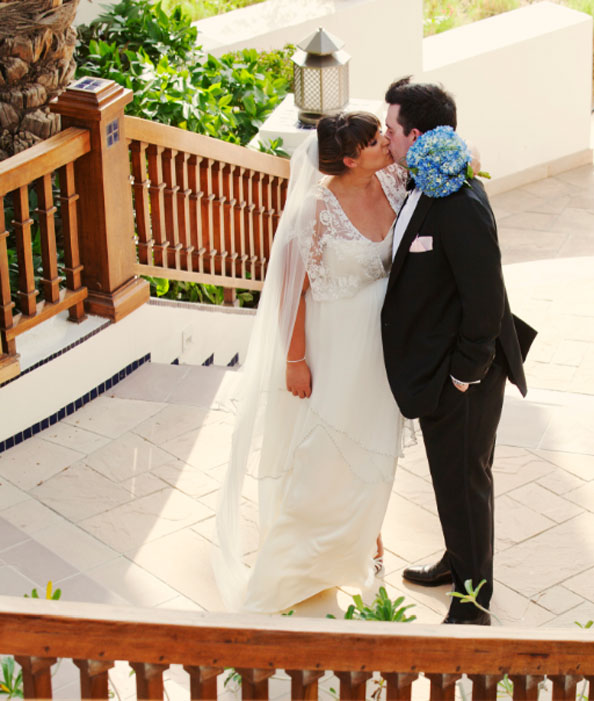 Helen and Nick had two weddings

What’s the best part about being married? Knowing that we’re there for each other, no matter what. He’s also an awesome cook and a brilliant dad.

How does married life differ from being single? We put each other first. Sure, we each need alone time, or nights out with friends, but we’re fair about it.

Advice for Dubai singletons: I really feel that meeting through people you already know is the best way. Also, remember that even a bad date can lead to a great story.

Read: Where To Go On That First Date In Dubai

‘Our Faith Brought Us Together’

The Salangsangs have been together for five years. Married for just over four years, they have a two-year-old girl, Clare, together. 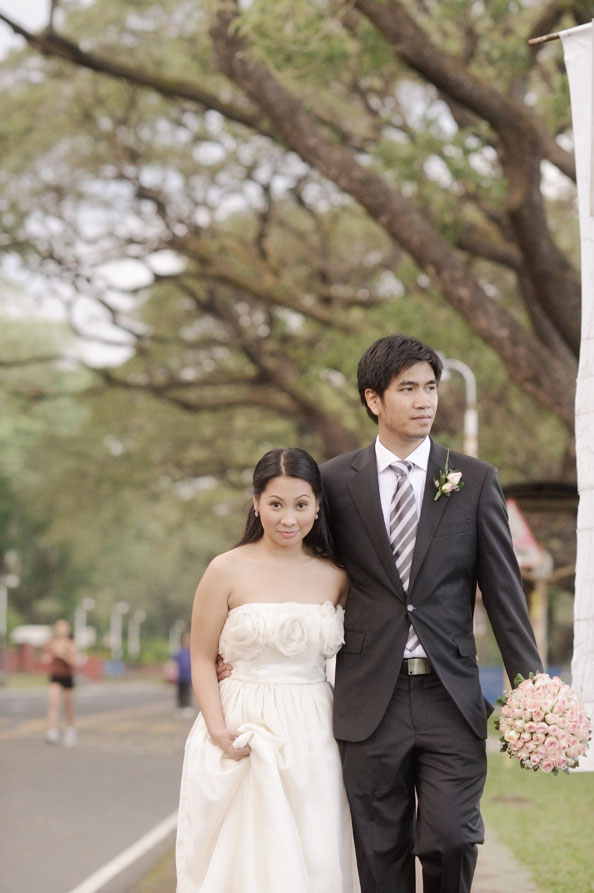 How long were you single before your met your husband? Three years

What did you love about being single? I learned a lot being single and away from home. I discovered new things about myself and what I wanted in life that I wouldn’t have known had I been in a relationship.

… And what did you hate about it? Watching movies alone. I also didn’t like being set up on blind dates by friends.

What was the most annoying question you faced when single? You’re not ugly, are you? (On an SMS with a guy I was being set up on a blind date with). 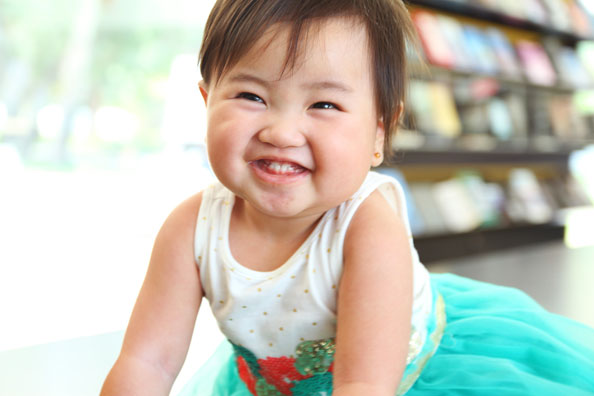 What was it like being single in Dubai? I loved it. I was flatmates with my cousin and best friend, so taking a bath everyday was optional and eating breakfast before brushing your teeth in the morning was normal.

Where did you meet your husband? In a church community group.

What were your first impressions? I tell Joel this every time – he doesn’t believe it – but when I first saw him I dreamt of him that evening and so I believe it was love at first sight.

What did your do on your first date? We had dinner and watched Eat, Pray, Love.

When did you know he was Mr Right? We were both home in the Philippines for holidays and I needed to undergo an emergency surgery. He stayed at the hospital with my mum everyday and never left my side. That was when I knew he was the one! 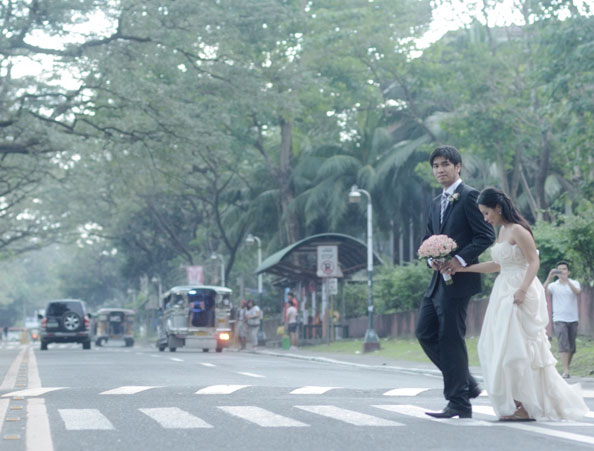 How did he propose? A few days after I checked out of the hospital, we went to St Clare of Assisi Church to offer thanksgiving. It rained hard so we were stuck in the church for hours. We talked about so many things about us and he asked me if we could spend our life together in that moment forever.

What’s the best part about being married? Going home to the person you love the most after a really bad day at work.

How does married life differ from being single? Making swift decisions as a single person is easy but when you’re married you have to ensure that decisions are made by the two of you. I love being married. I love spending time with my husband and our daughter. I feel like I’m always running out of time to spend it with them and make new adventures.

Advice for Dubai singletons: Love yourself. Be the kind of person you want to love.

‘My Mum Found Him’

The Englishs have been together for five years. Married for nearly over two years. 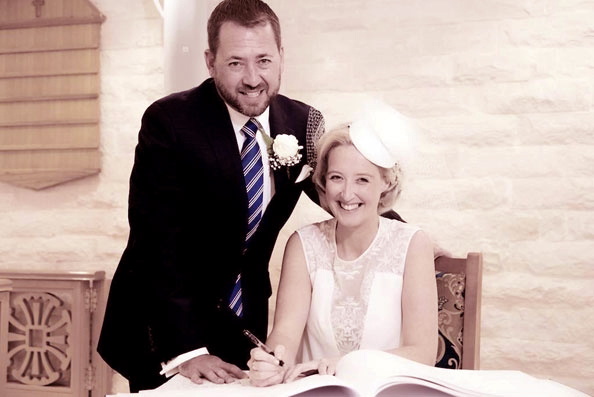 Maxine English and James English on their wedding day

How long were you single before your met your husband? Approximately two years.

What did you love about being single? Nothing in particular.

… And what did you hate about it? The dating scene here is brutal. It can leave you feeling like Dubai is the only place in the world you’ll never find ‘the one’.

What was the most annoying question you faced when single? Do you think it’s because you’re so confident and independent, men find that off putting?

What was it like being single in Dubai? It’s a fabulous place. I have my family and my amazing friends here, but when you do want to settle down and meet someone it can be really disheartening. 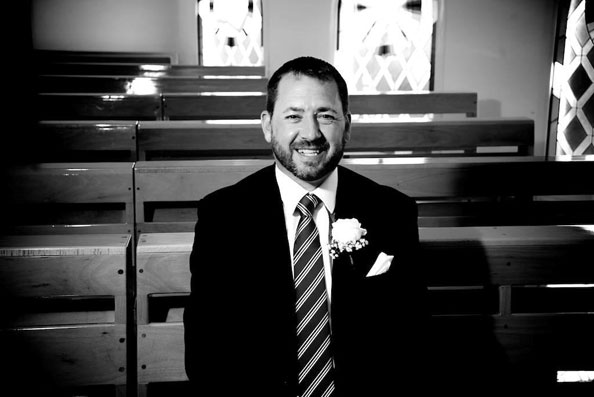 Maxine’s mum told her James was the one

Where would you go to find Mr Right? Nowhere. To be honest, if you are in a place you love then chances are a guy is there too that you already have something in common with.

Where did you meet your husband? We briefly met at a brunch then later he came to my 30th birthday party and my mother informed me I should talk to him as he was my future husband.

What were your first impressions? I won’t lie, I didn’t think he would be my type, although we did stay up until 5am chatting about all sorts.

What did your do on your first date? James took me to Left Bank (pre-drinks to see if we actually got on, not that I was aware I had to make it past phase one). Then he treated me to dinner at Neos where we remained until 3am.

When did you know he was Mr Right? At the end of the first date, when I said I was popping to the ladies, and he jumped up and asked me to wait. He went off to find out where they were so that I didn’t have to search. Gent!

The happy couple at their UK wedding

How did he propose? Poor James had set up a romantic dinner in our garden, but I wasn’t feeling well and moved the dinner inside and put my pyjamas on. Once the dinner was over I announced I wanted Haagen Daz and bed. He handed me the ice cream and the ring, and asked which I would prefer…

What’s the best part about being married? James is my best friend, and we are a team.

How does married life differ from being single? Being married means you have a back up, a partner and someone to share the good and the bad.

Advice for Dubai singletons: Do not let it consume you and don’t allow other people’s horror stories to taint your view of potentially lovely guys.

‘We Actually Knew Each Other For Years’

The Denhams have been together for four years. Married for three years, they have a seven-month-old bay boy, Jaxon James, together. 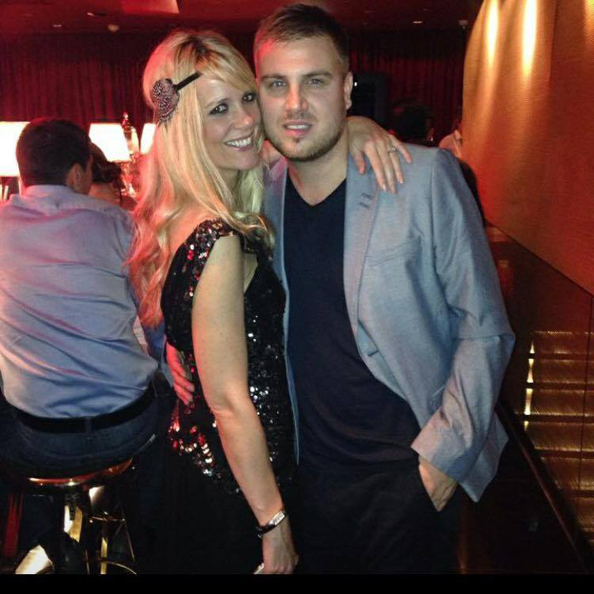 How long were you single before your met your husband? Two years (ish).

What did you love about being single? Independence, which I still have, but being able to do things on a whim without thinking about the other person.

… And what did you hate about it? I quiet enjoyed it, but I think there’s a lot of pressure around meeting someone these days.

What was the most annoying question you faced when single? Why is a girl like you still single?

What was it like being single in Dubai? Fun, there is lots to do in Dubai, whether single or in a relationship. 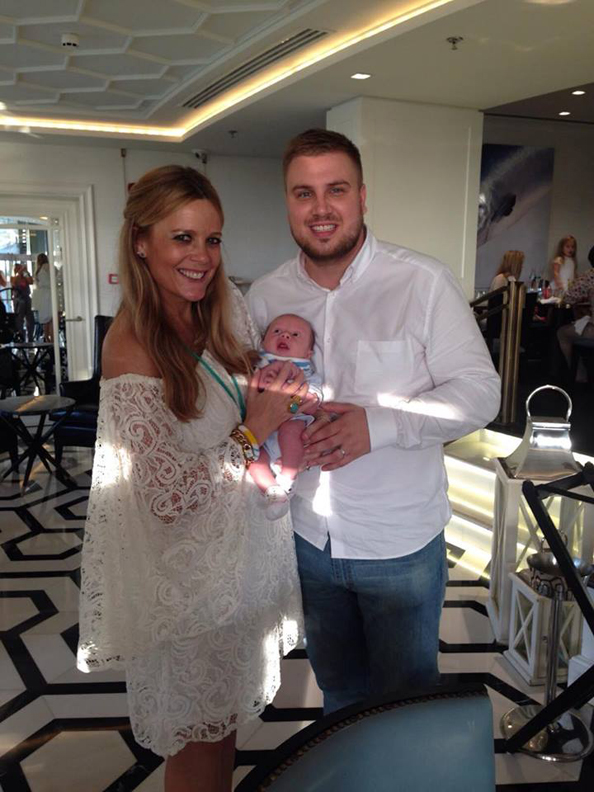 Melissa and Simon with their son Jaxon James

Where did you meet your husband? I actually new Simon for a few years through mutual friends, but bumped into him on a night out with friends. The next day I received a message: ‘Melissa, when are we going out for dinner?’ I agreed to dinner and the rest is history.

What were your first impressions? On our first date I noticed how nice his eyes were. He was just such a nice genuine person who made me laugh.

What did you do on your first date? We went to Ruth’s Chris Steakhouse.

When did you know he was Mr Right? I was very comfortable around him, I could easily pick up the phone the next day and ask him how I would spell a word (haha).

How did he propose? He booked a staycation at Dar Al Masyaf, and said we were going on a culinary flight, but before I could board I had to wear something, and out popped a gorgeous ring. What’s the best part about being married? Being with someone who makes you happy and supports you, and giving the same in return.

How does married life differ from being single? For me it doesn’t differ, only the surname. We do lots of nice things now as a family, but it’s also equally important to maintain our social life with our friends.

Advice for Dubai singletons: Don’t look for it, it will be happen. Be content and happy with yourself and your surroundings, and enjoy life as a single person.