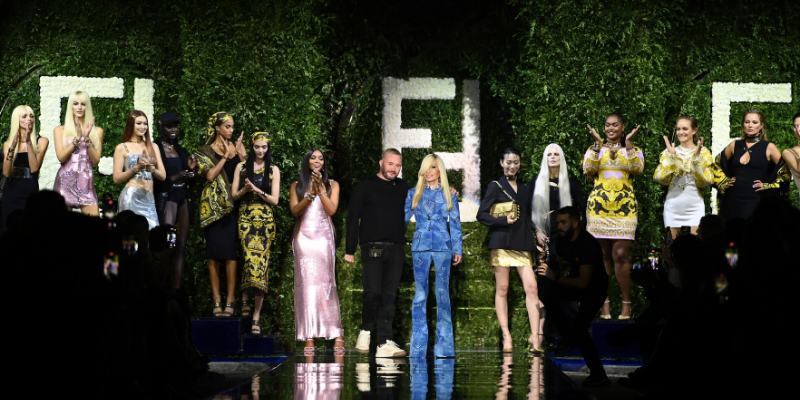 It’s Fendi by Versace and Versace by Fendi.

Fendi and Versace just closed out Milan Fashion Week in the most iconic way ever – unveiling a creative swap coined ‘Fendace’.

Showcased at the Versace headquarters in Via Gesù on Sunday, September 26, Fendi and Versace unveiled ‘The Swap’ to a host of star-studded guests including Dua Lipa, Elizabeth Hurley, Chiara Ferragni and more.

However, it was the catwalk that was the true star of the moment, not only because of the iconic pieces designed by Kim and Donatella, but the iconic individuals who graced the catwalk.

Kristen McMenamy, an ’90s American supermodel, opened the show and was followed by an array of fellow supermodels from throughout the years.

The two collections have been described by both Italian Maisons as something that celebrates “their friendship and the cultural impact of Fendi and Versace”.

Donatella herself described the ‘The Swap’ as an “unbelievable feeling”.

“HISTORY IN THE MAKING! Working with you has been fun, creative and EXCITING,” she said on Instagram, sharing a photo of herself with Fendi’s artistic director.

Both collections – Fendi designed by Donatella Versace and Versace designed by Kim Jones – will be for pre-fall 2022 and will be available come May.

After a year of in-person fashion shows largely being put on hold due to the pandemic, Fendi and Versace have come back with a bang.