India: The Rape Capital of the World? 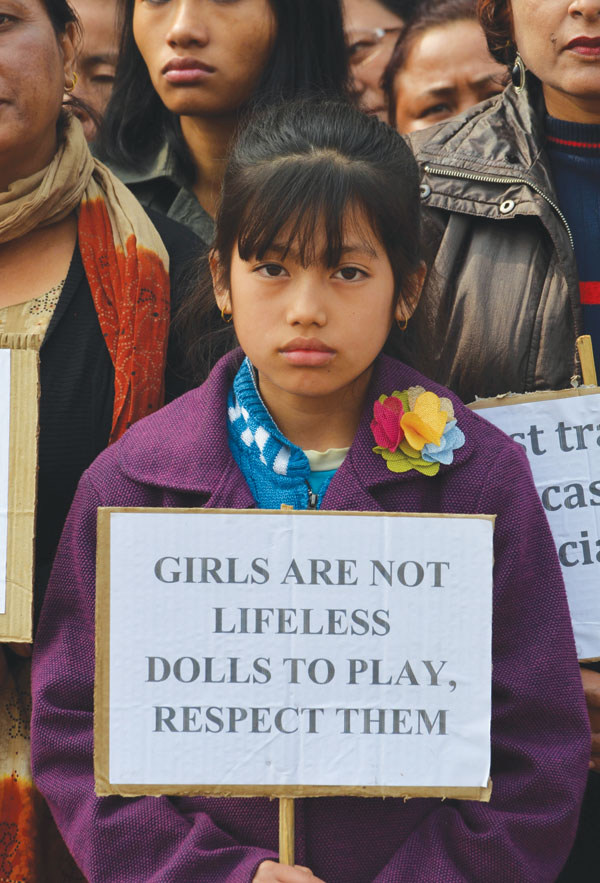 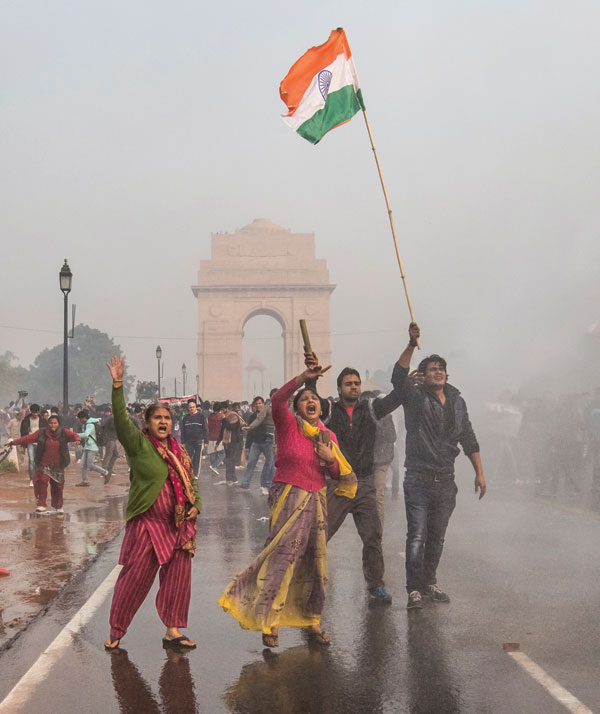 The rape and murder of a 23-year-old student in New Delhi last December has turned the spotlight on India’s shocking levels of sexual violence. But far from reducing incidents of assault and rape, the country’s statistics make for sobering reading. Is India the world’s most dangerous nation for women? Emirates Woman investigates.

Jyoti Singh Pandey was an ambitious physiotherapy student from a small village in Uttar Pradesh. On December 16, 2012, she and a friend had just been to see the movie Life Of Pi in New Delhi, the city where she was studying, and late returning home they decided to hop on a bus, a moment her friend calls “The biggest mistake I made.” After suffering lewd remarks from the driver of the vehicle and five other men, Jyoti was attacked and assaulted so violently that, when she was found dumped, naked, in the road, most of her intestines were missing and she had been violated with a rusted iron rod so forcefully that it had ripped her abdomen open. Eventually flown to Singapore to undergo a raft of emergency procedures, Jyoti’s condition worsened and she tragically died on December 29.

All six men on the bus were charged with murder and tens of thousands took to the streets of India’s capital to voice their fury at what was increasingly being seen as a sexual violence epidemic; and the brutality of the attack, plus the fact that it was carried out by strangers on public transport, shocked millions around the world. Vigils were held across the country and 4,000 people marched peacefully through New Delhi, but elsewhere protests turned violent when police used tear gas, water cannons and clubs to beat back angry mobs brandishing placards which read, “We don’t want your condolences!” Riots followed calls for calm by local politicians, with cars overturned and buildings belonging to the government overrun, leading the ruling party to implement a curfew and ban groups of five or more people from meeting in public. Two police officers were dismissed during investigations, but Commissioner Neeraj Kumar remained in his post, claiming that his force was doing a good job.

As with the famed Arab Spring, social media was used heavily to voice despair and defiance, with WhatsApp and Facebook users altering their profile pictures to add a black dot in front of their faces, showing solidarity amid a sense that their voices weren’t being heard. “What never talks is never silent either,” said one student, and the world’s media speculated that India was finally waking up to its own deep-rooted problem of violence against women with people looking to the highest tiers of Indian politics for signs that something would finally be done.

Admittedly there have been changes. A special task force has since been assembled to scrutinise the city’s police force which took over 90 minutes to transfer Jyoti to hospital that fateful evening due to arguments over which department held jurisdiction. An amendment was made to India’s Criminal Law Ordinance allowing the death penalty for rape, with voyeurism and stalking also made criminal offences, and by the end of February the country’s government had ring-fenced a 10bn rupee (Dhs658 million) Nirbhaya Fund – which translates as ‘fearless’, named for the pseudonym given to Jyoti – to promote women’s rights and safety.

Yet to most people the response was lacklustre. Some public figures denounced December’s barbarism, but remarks frequently placed the blame on the victims of sexual assault; with women’s use of mobile phones, the wearing of miniskirts, the ‘westernisation’ of Indian culture, marrying for love and even Chinese food all cited as reasons for violence perpetrated against females. “Until today I have not seen a single incident or example of rape with a respected lady,” laughably insisted the New Delhi case’s defense lawyer; while Jitender Chattar, a local political leader caused jaws to drop when he announced, “Chow mein leads to hormonal imbalance evoking an urge to indulge in such acts.”

One prominent scientist even suggested that if Jyoti had begged for forgiveness, she “would not have lost her intestine.” Since the attack, Ram Singh, the bus driver accused of participating in the assault, has been found dead in his prison cell, with police citing suicide and Singh’s family claiming he was murdered. This month a second attacker, Vinya Sharma, was beaten and poisoned in jail.

Any hopes that the New Delhi tragedy would spark a drop in India’s sexual violence statistics have quickly been dashed. A slew of horrific stories have since shocked the nation and the world including an incident in April in which a five-year-old girl in the central state of Madhya Pradesh was beaten and raped by two men, dying from her injuries 10 days later. Protesters in New Delhi took to the streets once more demanding the abdication of Commissioner Kumar after three metro stations and some of the city’s most recognisable landmarks were cordoned off by police anticipating riots who beat protesters after they erected symbolic female mannequins wrapped in chains.

The southern metropolis of Hyderabad has also been embroiled in scandal after it emerged last month that young Muslim girls were being sold to Middle Eastern and African men by local priests, or ‘Qazis’, in month-long ‘contract marriages’. And the emergence of the story has once again highlighted India’s apparent police ineptitude and the country’s reliance on tribal elders and religious leaders.

But incidents of violence aren’t confined to Indian women; back in March a 39-year-old Swiss woman was gang-raped while camping with her husband in Madhya Pradesh, with over 20 men detained in connection with the attack after the Swiss embassy demanded a thorough investigation. And a British woman was recently forced to jump out of her hotel window to avoid a man’s sexual advances in Agra, home of the Taj Mahal.

It’s no wonder then that tourism has been hit hard in India with up to 35 per cent fewer women visiting the country this year, and the industry is thought to be suffering a 10 per cent dip already in 2013.

“While the country continues to receive repeat visitors, it remains a safe destination for international visitors including women tourists,” one India Tourism manager explains. “However foreign visitors need to exercise caution, just as local residents do, while travelling through or staying at isolated places, to guard against becoming victims of undesirable elements.”

Meanwhile New Delhi has been called the world’s most dangerous place to be a woman. In 2012, 706 cases of sexual violence were reported in the capital, up from 572 the previous year, along with 727 molestation cases – with both figures increasing due to the more frequent reporting of attacks since Jyoti’s death. A rape is reported every 20 minutes in India, but only a quarter of subsequent prosecutions lead to convictions. In New Delhi the report-to-conviction rate is as low as 0.1 per cent and NGO, A Safe World For Women, estimates that one in three Indian women will be the victim of a sexual crime at some point in her lifetime.

India’s legal system is often at the heart of sexual violence issues. Some victims wait years for justice in a notoriously slow and overburdened court process. India has just 15 judges per million people and cultures and legal proceedings vary wildly from region to region with rapists given lenient sentences – some just months – for mitigating that they were drunk or missed their absent spouses when they attacked. The country’s notorious caste system has also come into play, where higher-caste men have argued in the face of overwhelming evidence to the contrary that they would never have stooped to commit a crime against a Dalit, an untouchable. The stench of police cover-ups and corruption also pervades many rape cases, with a handful of high-profile cases committed by officers themselves.

Deep-seated feudal traditions still exist in India that put women at risk. Over 44 per cent of girls are married before they reach 18. Dowries, less popular in India’s giant urban sprawls but still prevalent in its rural hinterlands, mean that girls are often seen as burdens to their families and sexual violence often goes unreported so as to retain a woman’s ‘dignity’.

But above all there are many aspects of Indian life in which women are simply second-class citizens. There are only 60 women in India’s 545-strong Parliament (the UAE has a far greater proportion at seven out of 40). Over a million girls are trafficked into prostitution and slavery each year in India, up to 90 per cent of whom are sold internally, and female infanticide means that India has one of the most skewed male-to-female population rates on the planet (women comprise just 48.5 per cent), with women essentially seen as commodities in many parts of the country.

While it is unhelpful to speak of a ‘rape culture’ unique to India – rape occurs in every country, every day – India’s crimes are rising while most western nations’ are dropping. It’s also startling to read political statements which blame victims for the horrific crimes perpetrated against them. “[Rape] starts with the woman,” one man told local reporters after Jyoti was attacked. “They drive men crazy.” With another pointedly asking, “Why was she out with her boyfriend at 10pm?” And India’s crumbling public services are also used as a veil behind which misogyny hides. Following December’s tragic events the Ministry of Human Resource Development proposed a new comprehensive sex education bill, which a parliamentary committee quickly quashed as having “absolutely no place” in Indian culture.

At its heart, the tale of Jyoti’s tragic death and the rapes and assaults of hundreds of thousands of other women in India, stems from their commodification from birth, and the small value placed upon females. India must look inwards if it is to stamp out an increasingly worrying trend for sexual violence. The events of the past few months have shown clearer than ever that legal shifts and court cases can only go so far if girls and women are treated from birth as second class citizens to be sold and sexually abused at will. India needs to stop stigmatising women like Jyoti Singh Pandey, and realise that when it comes to sexual violence there is only one gender to be blamed: men.