9 Things Everyone Was Gossiping About At Fashion Forward Season Six 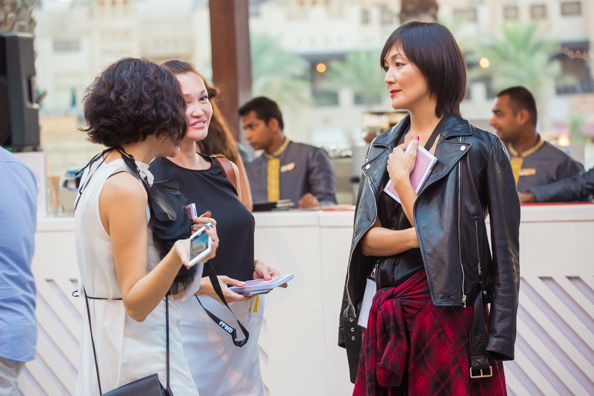 As Fashion Forward Season Six wraps up, we decide to give you an insider’s low down like never before.

You talked and we listened from the industry insiders, to the fashion editors, bloggers and general style go-getters, and we overheard some fabulous conversations. Here’s our top 10 snippets from the four-day extravaganza that took us from Madinat Jumeriah to d3… #EWGossip

At Taller Marmo’s show. “Don’t get me wrong, even though those trousers look a bit clown-like, I’d wear them. It’s circus chic.”
During the Architecture of Fashion Talk at Hai d3. “A 3D printed dress? It’s tech couture, babe.”

When one blogger asked why Scott Schuman chose the name The Sartorialist. “He just liked the word. He said he liked confusion and that he doesn’t like to give out a clear message to anyone.” The blogger: “Oh, I so need to start doing that.”

“Sharpen you elbows ladies, it’s a free-for-all,” said one show-goer on fighting their way into seeing a show.

“Oh my god, it’s so desert hot, can no one put the AC on outside?” Sweating spectators sitting in the Hai d3 garden, complete with quaint tables and swings.

On spotting one Dubai street style star’s statement bag: “OMG! Forget eye of the tiger, she’s gone for the head!”

Related Story: Fashion Forward Season Six Round Up: Everything You Need To Know

After his talk at the Madinat Jumeirah venue. “I think Imran Amed is my idol. Like seriously, he has revolutionised my thinking.”

“It’s really annoying. There are people who think they are at Paris Fashion Week and they’re not. It’s annoying the way they carry themselves.”

When one guy barged through security refusing to show his ID. “It’s such a chavy industry,” said one spectator. “We just aren’t used to that.”

Fashion
February’s – The Innovation Issue with Mouawad
23 hours ago