Ever wondered what it’s really like to be a flight attendant? Meet SkyFlyGirl… 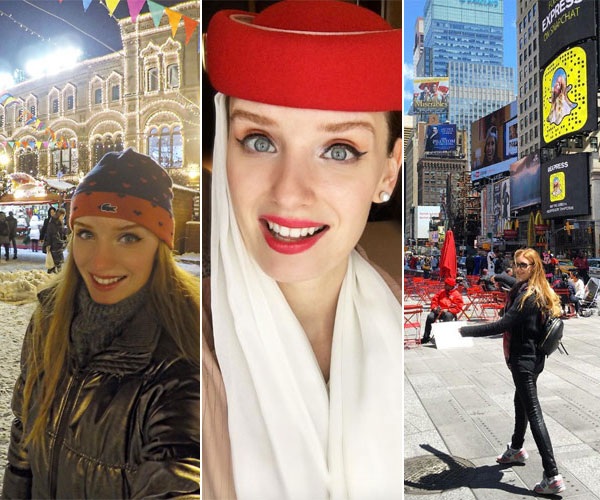 The Dubai-based flight attendant and rising YouTube star gives us a glimpse into her jet-setting lifestyle.

Being a flight attendant sounds like one of the most glamorous jobs in the world – breakfast in Paris one morning, New York the next. Now, one Dubai-based flight attendant is offering a peek at what life in the sky is really like.

Maria Soldatova, 29, is known as SkyFlyGirl on YouTube. Her globe-trotting video diaries allow viewers to follow her adventures as a cabin crew member for one of the world’s top airlines, which sees her in a different destination almost every week.

The former model from Siberia had always shared photos of her travels on Instagram, but about a year ago, some of her followers started requesting that she make daily videos.

Read:
Meet The Female Pilots Breaking Barriers At This Dubai-Based Airline
OK, We Need To Score An Upgrade To This New Way Of Flying

“I thought, why not? I never sit at home, I’m always off somewhere, flying to different countries all the time,” Maria told Emirates Woman.

The flight attendant’s most popular video, which shows her preparing for and recovering from a 16-hour nonstop flight from Dubai to Auckland, New Zealand, has more than 890,000 views.

She tells her viewers about the ins and outs of being a flight attendant, covering everything from staff discounts and uniforms rules, to makeup tips and tricks for beating jetlag (“never close your curtains when you sleep”).

“I’m very honest with everybody. Any questions they ask me, I try to answer.”

Maria, who says she always dreamed of being a TV presenter for a travel channel, spends her layovers meeting up with viewers, who are based all over the world.

“People send me comments like, ‘Okay Maria, you have a flight to Vienna, let me take you around and show you the city.’

“I have a little notebook, I write down who is where, in what city, then I message them and say, ‘You want to meet tomorrow? I’m coming!'”

Maria has been based in Dubai for over six years, and says she loves the city for its diversity.

“Every time a flight takes off, our cabin manager makes an announcement that we have 20 different language speakers and 15 nationalities onboard.

“For me, Dubai is top of the top. I don’t know where else I would rather be living at the moment.”

A FEW OF MY FAVOURITE THINGS…

We asked Maria about some of her favourite places, both in Dubai and further afield…

Favourite market: The Ripe Market at Zabeel Park every Friday.

Favourite neighbourhood: City Walk. “I’ve been to all the coffee shops there.”

Favourite beach: Kite Beach. “It has a running track, and you can go all the way to the Burj Al Arab.”

Favourite restaurant: Apron & Hammers in Dubai Marina. “I love seafood so much.”

Favourite place to shop: The Dubai Mall. “Everything is here.”