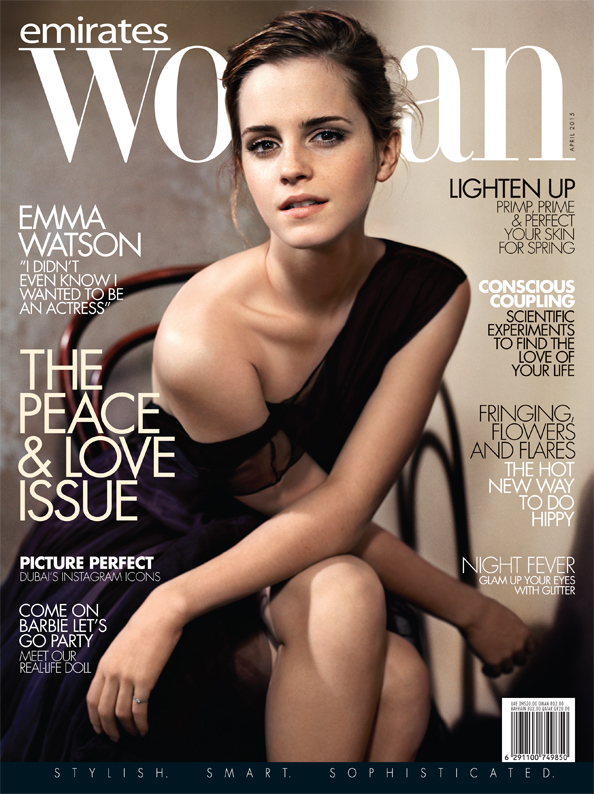 She’s just been proclaimed the most outstanding woman in the world by Askmen.com,  who clearly have good taste. Widely touted as the face of feminism right now, Emma Watson was the natural choice to front Emirates Woman’s Peace and Love issue.

The fresh face of feminism

It would have been easy for the actress – who turns 25 in April – to rest on her Harry Potter laurels and lead a laid back life of luxury. Instead, Emma Watson took a year off from making movies to focus on finishing her degree at Brown University, before throwing herself, body and soul, into her role as UN ambassador to promote gender equality. With a rousing speech watched by over 17 million viewers, Emma launched the HeForShe campaign in which she calls upon both men and women to act as agents of change. She’s also doing whatever she can to save the environment – one small action at a time. “When I was 18, I designed a line of organic clothing, because I am really interested in the environment. Ultimately, damaging the world also means damaging human beings. It all comes back around and affects us too in the long term. So I have always been really interested in sustainability. I don’t eat very much red meat, I recycle, I turn lights off. I do very small things on a day-to-day basis. I hope I make a difference. I would like to leave the world knowing that I left it as I found it,” she told reporters while on the publicity trail for Noah last year.

And despite admitting that at one stage she wasn’t even sure she wanted to be an actress, the star – who was plunged into the Harry Potter franchise 14 years ago – clearly has drama running through her veins as she’s thrown herself wholeheartedly back into her career. With two thrillers coming out this summer, her willingness to tackle challenging roles out of her comfort zone prove that she’s got what it takes to be an actress of substance.

“It feels like I was building a portfolio over the last five, six years, “ she recently said to Total Film on the subject. “Now I feel like I’m ready to really be carrying films. I’m really just ready now to focus on my career full time and go full steam ahead. It’s exciting at the moment.” Emma on the word feminism:

Emma on actresses in the film industry:

“Currently, females comprise seven per cent of directors, 19.7 per cent of writers, and 2.2 per cent of producers in the film industry. When you have a female writer, there’s a higher representation of women. So that’s a pretty huge problem. Why are women not telling their own stories?”

For those of you who missed Emma’s impassioned HeForShe speech at the United Nations here it is:

What you will learn from the April issue

* That you can bare all with foundation-free skin

* How to be a haute hippie