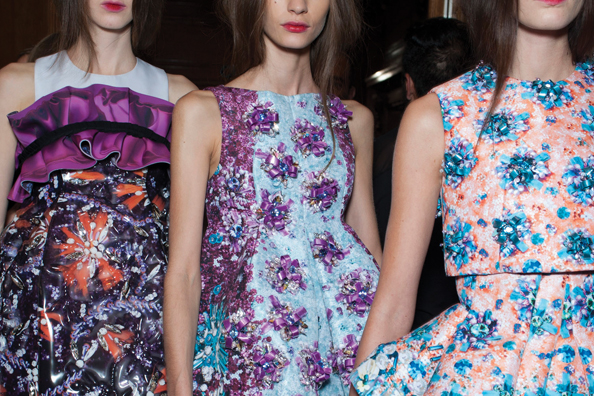 Last night Dubai was treated to an exclusive revealing of Mary Katrantzou’s spectacular debut 2014 Resort Collection. Joined by the Creative Director of stylebop.com, Leila Yavari, the region’s elite headed down to DIFC to show their support. For a woman that up until 2005 aspired to be architect, Mary has made an incredible impact on the fashion industry. Now a fully fledged designer, her dresses retail in excess of Dhs52,158 and she has a legion of fans worldwide waiting for her every collection.

Born in Greece to an interior designer mother and a textile-engineering father, it’s clear creativity runs through her veins. Moving to the USA in 2003 to pursue a career in architecture at Rhode Island School of Design, Mary then opted to complete her BA and MA at the prestigious Central Saint Martins in London.

Identifying that womenswear would combine her love for structure, pattern and bringing colour and form together, Mary felt that course director, Louise Wilson, would be able to identify whether her work would have a life past her MA course. And that it did.

Graduating in 2008, her final show mapped out her signature style and the intricate and avant-garde prints she debuted during her first ready-to-wear fashion show in 2009, at London Fashion Week, received rave reviews.

With a label that  has gone from strength to strength and with a collection of awards under her belt, Mary now finds herself stocked in over two hundred stores worldwide.

At an exclusive cocktail party held last night at Dubai’s DIFC, Mary was the guest of honour as stylebop.com revealed her debut 2014 resort collection. All of Dubai’s fashion elite were treated to a night of glamour and dancing surrounded by her colourful and must-have pieces, which we were promised will be available in coming weeks!

Emirates Woman’s Alexandra headed down to the Ritz Carlton DIFC to quiz Mary before the big reveal and what a pleasant surprise it was to come across Mary, sipping on a strawberry milkshake and wearing a pair of cowboy boots she picked up on a recent trip to Dallas… 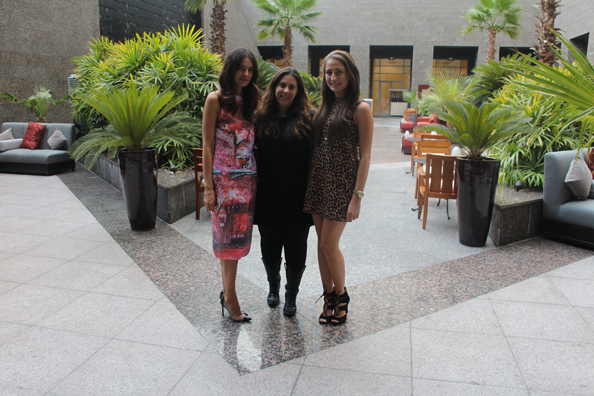 Why did you decide to create resort collection?

Usually, the ready to wear collections are about the sculptural and embellished pieces. There’s so much exploratory work that isn’t so easy to translate in stores because it’s so expensive. It’s really important for me to do a collection based on cut and the prints and not having to worry about the runway and instead just thinking about the end consumer.

What inspired this particular collection?

The resort was part of the landscapes we did for A/W13. You can see the transition from a really barren and winter landscape to one that’s bloomed and is full of colour. It’s important to broaden our audience and hopefully target new women.

Will one of your future collections be inspired by Dubai?

Usually when you travel it’s the time you want to be most inspired, so you take it all in because you’re on the look out for the next season. So yes, you never know, there could be a fun bespoke collection that follows up this trip!

Do you have a favourite piece in the collection?

It’s a yellow, fully embellished dress called Carmakal. It has a Victorian-inspired vault and ceiling, almost as if you’re in a train station and bursts into a field of yellow flowers. It takes an architecture element and combines it with this season’s floral trend. It’s finished with bright colours and lots of embellishment. 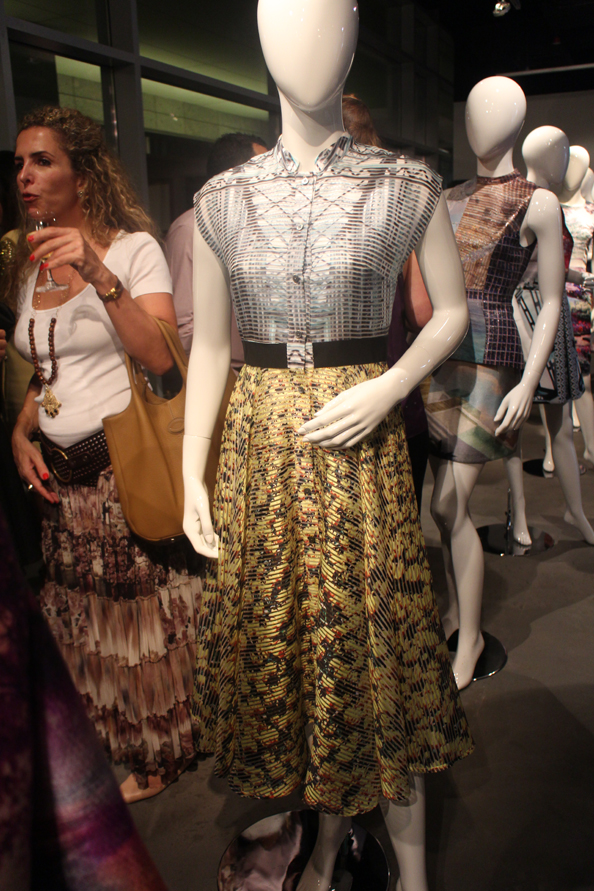 Explain the process behind designing one of your pieces?

It’s usually a visual image. My research is very image based so we create a database of inspiration and then start collaging and mapping to build up a print from scratch. We create an artificial landscape and then work on the silhouette, which is all about finding the balance of a clean modern shape with the print.

Is there a particular woman you design for?

I never have a muse because I think print is very democratic. A girl who’s 16 or a woman in her sixties can wear my pieces. The Katrantzou woman knows her style and is confident. My designs are not for a woman who wants to enter a party unnoticed.

How do you feel when you see someone wearing your designs?

I feel great when its well presented but sometimes I’m like, ‘well that’s interesting.’ I get really excited when a woman’s looking beautiful and you can see her feeling really confident and loving what she’s wearing. At the end of the day we’re making dresses for women to wear, not just for them to hang on the wall.

What has been a career highlight so far?

I never thought I could win anything. Even when I was nominated for The Swiss Textile Award in 2010, it wasn’t until I read my horoscope I thought I might win. It was a moment where I felt there’s no ceiling to what I can do. I love that in 10 years I don’t know where my business or I will be!

Do you have a favourite collection so far?

I remember flicking through magazines and creating collages of supermodels from the 1990s when I was younger. For somebody who never wanted to be a fashion designer, that’s always been my attraction to the world. I also used to draw princess dresses, which is my mum is trying to resurface.

Tell us about your personal style?

My style is a uniform of monochrome that I accessorise. Even my team, when I interview them are so colourful, but then two years down the line they are all in black. When you work with print, black becomes a subconscious uniform as it cleanses the palette. I do love jewellery though and love buying it when I’m travelling.

What are your thoughts about online shopping?

I do all of my shopping online at the moment. I think for a print based brand the merchandising is so much easier. As a designer you can have certain pieces that are better off standing alone instead of on a rail. Designers feel better represented and for a shopper the service is excellent. These days you don’t miss a thing especially if you look at stylebop.com with their 360-degree view!

What are your top tips for making it (and surviving) in the industry?

Remaining open minded and flexible. I feel sometimes women are a bit more conservative with their decisions. I haven’t been, I’ve gone into things naively and fearless. You’ve got to try. I always say you regret something you don’t do and learn from something you did.

If you weren’t a fashion designer what would you be doing?

I’d probably still be an architect or a lawyer; I can structure a good argument!

If you could have a super power what would it be?

To see multiple things at once. So for inspiration I could switch on and see what’s happening in London. Kind of like having Google Earth in my head.

What is a secret nobody else knows?

One of my worst vices is watching The Young And The Restless when I’m designing. I need something brainless on in the background so it doesn’t take too much of my attention, but there’s enough drama to feel like I’m participating.

Mary Katrantzou is available on stylebop.com