Yes, an Emirates ‘flight attendant’ actually stood on top of the Burj Khalifa 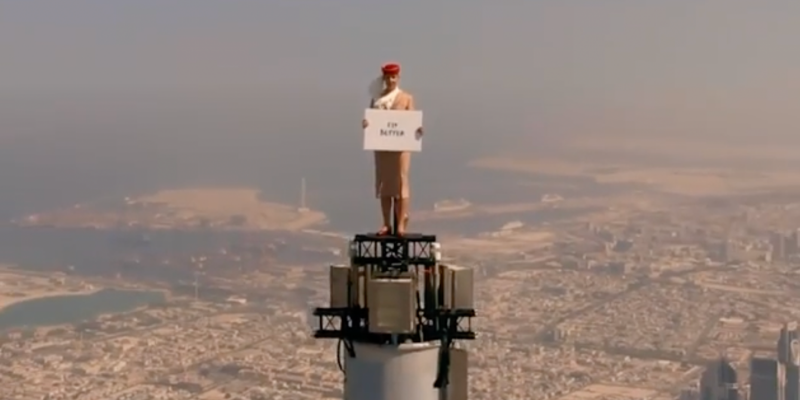 Last week’s news of the UAE being removed from the UK’s red list would have come as a sigh of relief for many.

In celebration of the news, making travel easier for many UAE residents who are UK citizens, Emirates Airline shared a video stating they were “on top of the world” over the change.

In the video, a woman dressed as a flight attendant is seen holding up a series of signs which showcase a message.

READ: UAE removed from the UK’s red list, but there’s some key things to know

It reads: “Moving the UAE to the UK amber list has made us feel on top of the world.”

In keeping with the “on top of the world” message, the camera then pans out showing the entirety of the Dubai skyline as the flight attendant is seen standing on top of the Burj Khalifa.

Taking to Instagram, Nicole said it was “one of the most amazing and exciting stunts I’ve ever done”.

“A big shout out to Emirates Airlines for your creative marketing idea,” she added. “It was a pleasure being a part of the team.”

The epic video was produced by TECS Event Services and Prime Productions AMG, with Choppershot, a Dubai-based film company, shooting the footage.

“Just to reiterate – this is very very real with @nicolesmithludvik being stood up there for hours,” he said on Instagram. “This human is an absolute rockstar…”

With this video, Emirates Airline has most definitely reached new heights.