Elie Saab Is Really Dressing All The Stars This Week 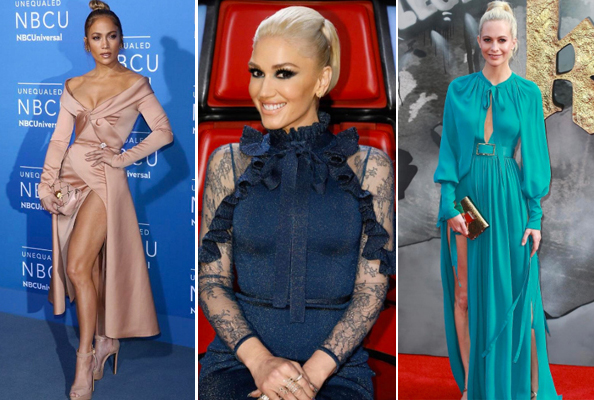 It’s long been a go-to label for the world’s most famous faces, but this week has seen Elie Saab’s star rise to new heights.

The Lebanese designer has dressed a wealth of celebrities judging by the brand’s Instagram feed, which currently looks like a who’s who of Hollywood.

Case in point? Actress, singer and general superstar Jennifer Lopez has sported Saab dresses not once, but twice this week.

Read:
The Best of The Ramadan Collections You Can Shop Now
Steal Her Style: This Is Where Queen Rania’s Latest Looks Are From…

The Get Right crooner wore a nude-hued, off-shoulder number from the label’s S/S17 haute couture collection to a NBC event in New York.

The tone-on-tone look complemented the mum-of-two’s olive skin, with a slicked-back bun and minimal accessories letting the sheeny gown shine.

J-Lo also sported a black mini from the pre-fall collection – with quite the power shoulder – for an appearance on the Today Show.

No Doubt star Gwen Stefani also donned Saab for a TV appearance, wearing a high-necked number from the A/W 17 line.

The metallic midnight blue and delicate lace sleeves meant Stefani stood out during her role as judge on talent show The Voice.

Read:
10 Royal Looks To Inspire Your Ramadan Wardrobe This Year
We Need To Take A Moment For Zendaya In This Zuhair Murad

@poppydelevingne glows in ELIE SAAB Ready-to-Wear Spring Summer 2017 at the premiere of ‘#KingArthur: Legend of the Sword’ in London

Finally, rounding out the label’s red-carpet appearances, was Scarlett Johansson, who wore a lace-panelled number from the A/W 17 range to a New York gala.

Saab was also making a splash in print, with model Lottie Moss and actresses Nicola Peltz and Fan Bingbing sporting the label in several magazine spreads.

And with the Cannes Film Festival kicking off tomorrow, we’re sure to see more Saab on the red carpet over the next few days.

We’ll be bringing you more on the fashion hits at Cannes, so stay tuned…