This Dubai Man Popped The Question In A Rather Unique Location… 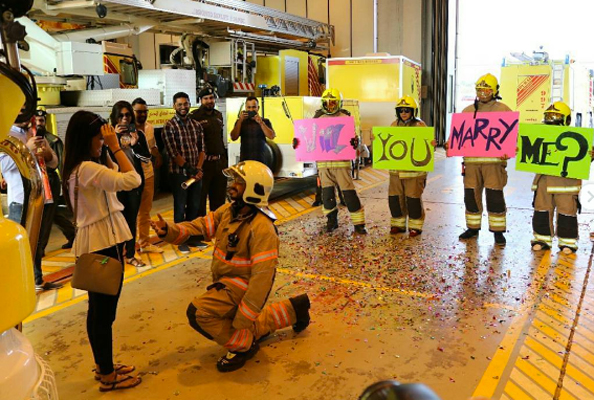 “Her obsession with firetrucks made me decide exactly how I wanted to make this happen.”

We’ve previously pulled together 10 of the most unique places to propose in Dubai, but it looks like we’ll need to add another spot to our list.

One local man roped in Dubai’s emergency services to help him pop the question this week, and the resulting photos have left us feeling rather gooey inside.

Read:
This Muslim-Hindu Couple Has A Real-Life Romeo & Juliet Story
The Work That Went Into Creating This Qatari Princess’ Wedding Dress Is Next Level

Dressed in a firefighter uniform “to assure his fiancée of his readiness to overcome any challenges they might face in life’s journey”, Shelton Rego got down on one knee at the Emirates Martyrs Fire Station.

Why? Because bride-to-be Nicole’s “obsession with firetrucks made me decide exactly how I wanted to make this happen”, wrote Rego on Instagram.

Don’t think this picture needs a caption but here goes! I asked and she said yes. ❤ Her obsession with firetrucks made me decide exactly how I wanted to make this happen. 👫 Thank you @dcd997 for making this possible. Truly a memorable event in the start of our adventure together. Couldn’t have had this any other way. More pictures and videos coming soon! Picture credits: @rosellusion @newgirlonthisblock @mawreena @thanweerappan #willyoumarryme #shesaidyes #theproposal #engagement #itsofficial #allmine #love #forever #justthebeginning #firetrucks #emotions #loveher #wooohooo #dubaicivildefence #997 #dubai_civil_defence #proposal #family #friends #weddingproppsal #celebration #excited #instalove #instagood #newjourney #mydubai #dubai #uae

“For some reason, she’s always been crazy about firetrucks,” the new fiancé posted on Wednesday.

“That’s what led me to have the proposal at the Al Manara Emirates Martyrs Fire Station. The grand entrance on the fire engine, sirens blaring, was the icing on the cake.

“Truly a memorable event in the start of our adventure together. Couldn’t have had this any other way.”

Four friends, who also wore firefighter uniforms, held up cards asking Nicole “will you marry me?” in the first proposal to take place at the fire station.

Being male is a matter of birth, being a man is a matter of age but being a gentleman is a matter of choice – Unknown. The moment of truth captured beautifully by @thanweerappan #proposal 💍#proposalgamestrong #shesaidyes #engaged #the2hungrynomads #gulfnews #dubai_civil_defence #dubai #mydubai #uae

Read:
This Dubai Couple Booked Out An Entire Cruise Ship For Their Wedding
A Dubai Man Spent Dhs1 Million On An Over-The-Top Marriage Proposal

The Dubai Civil Defence also shared images from the occasion on social media, revealing that hosting the engagement was one of the station’s “community initiatives”.

The couple, who are both from India and have known each other for 11 years, told Dubai Eye that the civil defence were “amazing” on the big day.

“How I got Nikki there was I told her the fire station was having an open day,” Rego told the radio station.

“The firemen welcomed her in, pretended and went along with it, and then we came in [in a fire truck], sirens blazing.”

The groom-to-be also revealed he’s been planning the proposal since November, and made sure Nicole’s family and friends were there on the day.

The couple plan to tie the knot in Mangalore, India, in December.