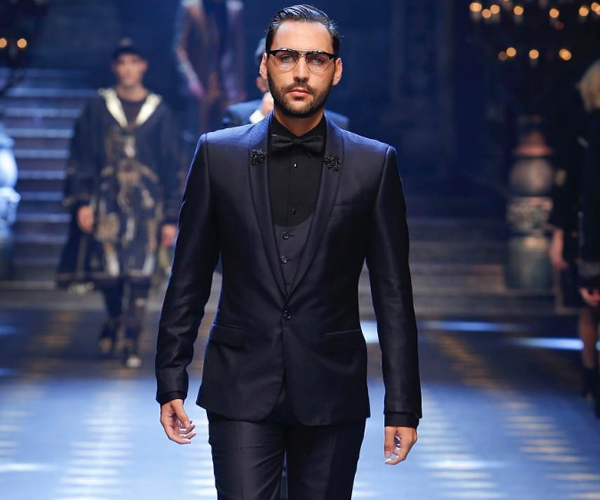 He’s a local style icon, so made a natural fit when Dolce & Gabbana were looking for social-savvy millennials for their latest fashion show.

Ahmad Daabas, founder of men’s fashion site AMD Mode, was one of 49 models who took to the catwalk at the luxury label’s recent Milan Fashion Week display.

Donning a super-sharp navy suit from the Italian brand’s Autumn/Winter 2018 collection, the Dubai-based expat made the trip all the way to the Italian fashion capital for the event.

The catwalk show – dubbed “The New Princes” – was based around celebrating up-and-comers from the younger generation.

“Each millennial had to select and style their own look so as to express themselves,” Daabas told Gulf News.

“The second the show started it was a bit scary, as you know for a fact that all eyes are on you.

“But when you’re on the runway all what you see is the light hitting your face and you can’t see anything else.”

Read:
7 Models You Didn’t Know Were Arab
So Many Stars Wore Lebanese Designers At This Year’s Golden Globes

Daabas shared several pictures of the show, both from the runway and behind-the-scenes, saying it was an “amazing experience”.

Despite the event taking place in Dubai, and running in its third season, international models are usually picked to walk in the shows, especially the catwalks where the fashion might not be considered modest.

Al Hajsi told AFP after the show: “It’s amazing to be on the catwalk… a lovely feeling. I enjoy it with all my heart. When I see the lights on my face, life lights up with the feeling that international fame is ahead.”