Hurrah, Dubai Canal Is About To Be Officially Opened 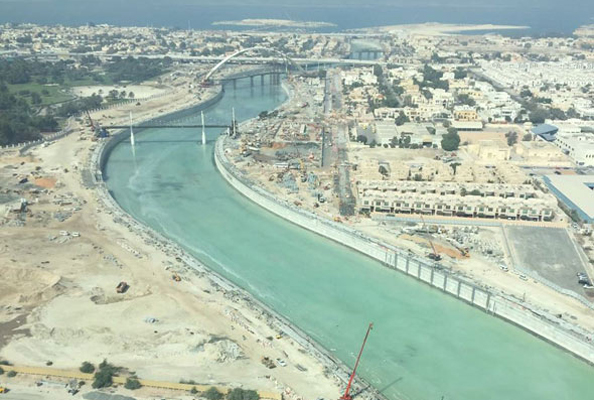 It feels like it’s been a long time coming (thanks to all those Sheikh Zayed roadworks), but Dubai’s stunning manmade waterway will open on Wednesday.

The 3.2 kilometre Dubai Canal – which has been in the making since 2013 – will be inaugurated by HH Sheikh Mohammed bin Rashid Al Maktoum, Vice-President and Prime Minister of the UAE and Ruler of Dubai, in an evening ceremony.

This also means that, according to the RTA, that new water taxi and ferry services will be operating along the canal from Thursday. 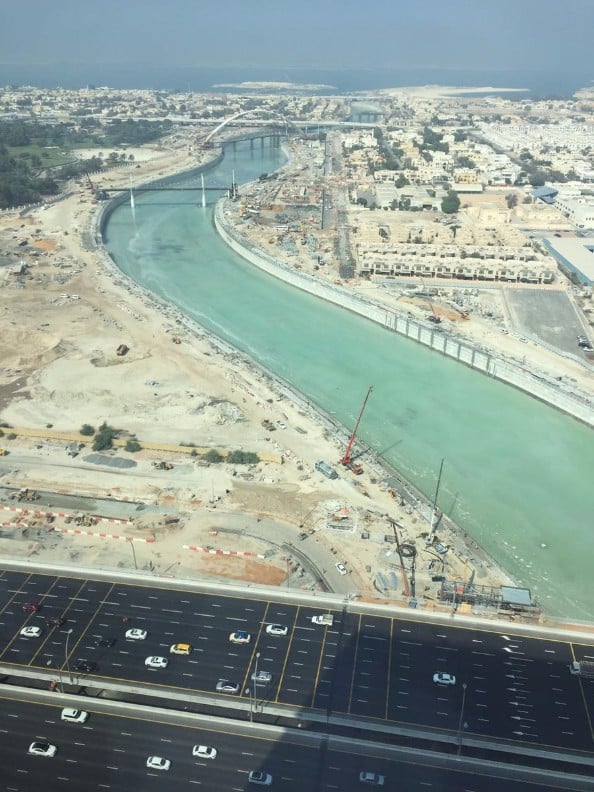 When finished, the canal will be lined with retail and restaurants, parks, accommodation, a running track, greenery, seating areas and environmentally friendly lighting – but for now it’s just the waterway itself opening for business.

Here’s what you need to know about this new development and, more importantly, about the Dubai Canal itself.

Read:
This Is How You’ll Be Able To Travel Along Dubai Canal
New Dubai Mall To Boast Rooftop Park & A Canal
These Are Apparently The Cleanest Neighbourhoods In Dubai

WHAT IS THE DUBAI CANAL?

The Dubai Canal is a 3.2 kilometre long waterway stretching from Business Bay to the Arabian Gulf – think Dubai Creek, but modernised and moved to the centre of the city.

Here’s a video showing the Dubai Canal before it was filled with water, to show you where it begins and ends:

“The Dubai Water Canal is one of the smartest ideas of Sheikh Mohammad that adds a unique tourist and commercial showpiece, offering a new style in Dubai,” director-general and chairman of the RTA’s Board of Executive Directors, Mattar Al Tayer, told Gulf News when announcing the opening.

“Sheikh Mohammad is always keen to roll out visionary ideas that define new concepts for people’s happiness and welfare.”

SO WHAT’S THERE EXACTLY?

When the Dubai Canal is finished, we can expect a brand new Jumeirah Beach Park, a mall to go with it as well as a seven kilometre running track and apartments with views of Safa Park.

The photos released by Dubai Media Office show the water running from Sheikh Zayed Road, past Safa Park all the way to Jumeirah Beach.

This picture gives us an idea as to what the canal will look like when it’s finished: 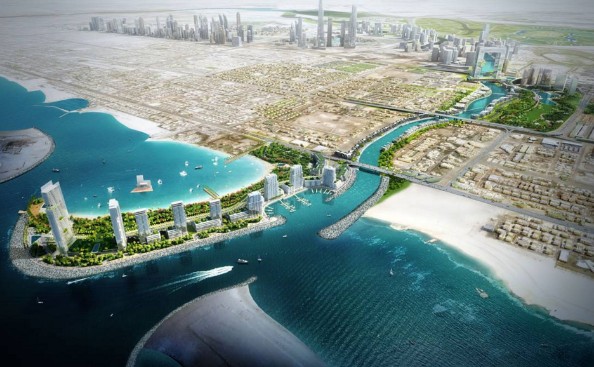 Read:
Could The Dubai Frame Be The UAE’s Most Popular Attraction?
The Tower Dubai Will Be Taller Than The Burj Khalifa
Dubai To Open First Shopping Mall Dedicated To Furniture

WHAT ELSE CAN WE EXPECT?

The area surrounding the Dubai Canal will be super-safe (which is super-super-safe in Dubai terms), thanks to smart surveillance cameras that employ face-recognition technology. 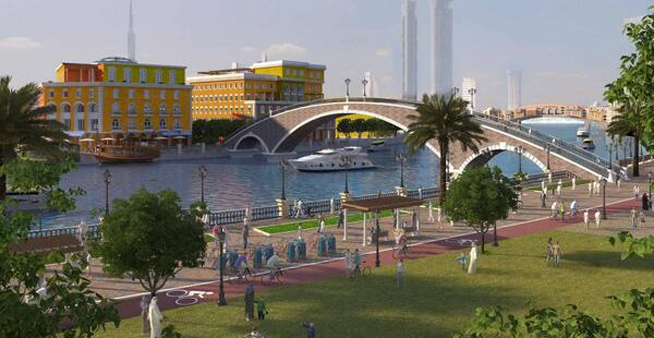 As far as marine transport goes, there’ll be nine new stations open along the canal, meaning commuters will have a way to beat the Sheikh Zayed Road traffic.

The RTA estimate that over six million passengers will be ferried annually around the canal as well as the man-made islands off the coast of the city.

Well, there’ll be five new stops along the Canal itself and four along Business Bay, bringing the total number of marine stations in Dubai to 42. 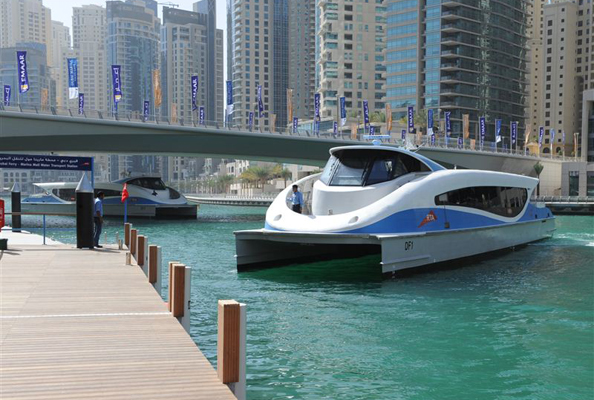 The water taxi will cost between Dhs55 and Dhs205 depending on the distance – or you can charter it for a whole hour for Dhs400.

Along both banks of the canal there’ll be a mix of 5,345 residential units as well as 948 hotel rooms, split among three areas known as Jumeirah, Peninsula and Gate Towers. 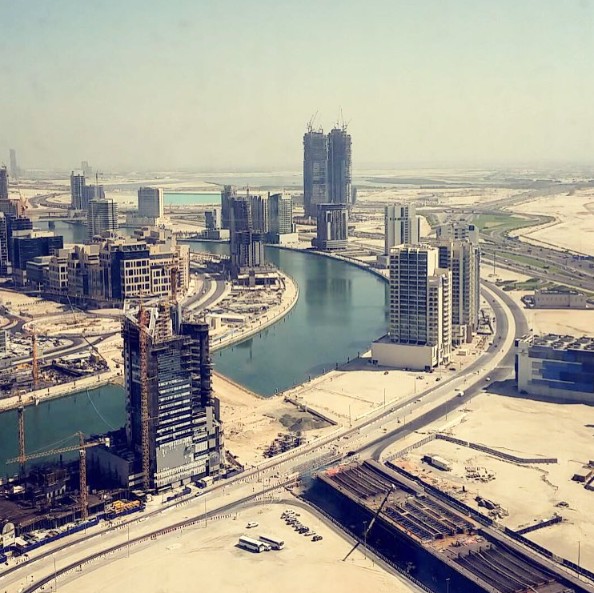 Near the entrance of the canal, the Gate Towers bridge will play home to a three-storey mall with a rooftop park, spanning 300,000 square metres with 434 retail outlets and restaurants. 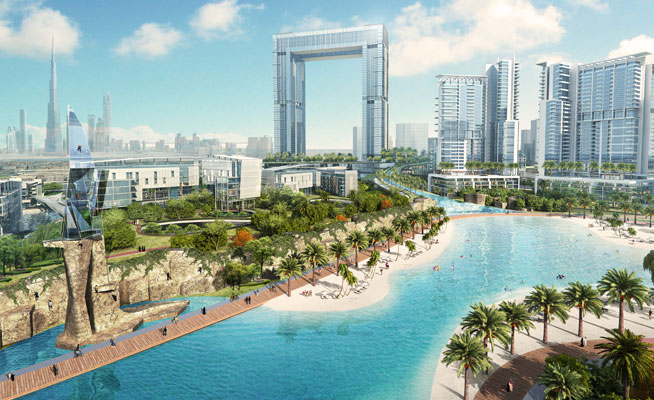 The Gate Towers mall can be seen in the centre of this photo.

Along with Dubai Canal, Jumeriah Beach Park will also reopen, with its stretch of beach set to extend by one kilometre.