Did you know that HH Sheikh Mohammed hand-reared a cheetah? 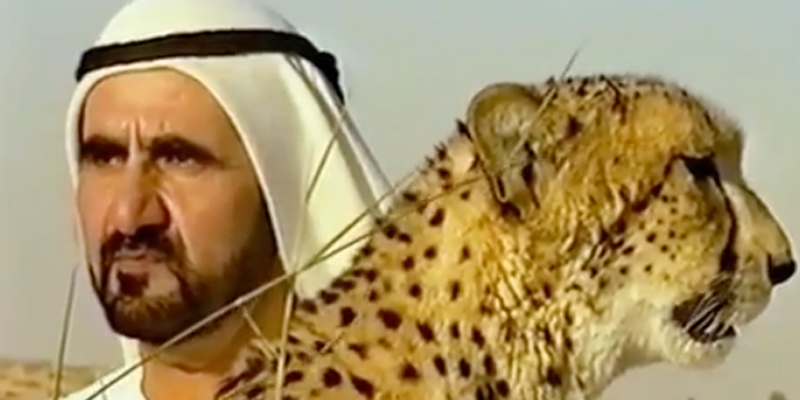 We can learn a lot from the royal’s “magical moment”, says HRH Princess Haya.

His natural affinity with the animal kingdom has been well documented, but we’ve never quite seen footage like this.

HH Sheikh Mohammed has been shown sharing a close bond with an orphaned cheetah, in a short video shared by HRH Princess Haya bint Al Hussein.

Read:
Our favourite Middle Eastern royal weddings from the last 25 years
Sheikh Hamdan watches on as Dubai’s flying taxi takes to the skies…

And it turns out the world’s fastest land mammal and the Vice President and Prime Minister of the UAE go way back.

“Orphaned as a cub, His Highness Sheikh Mohammed bin Rashid Al Maktoum has hand reared this majestic cheetah in the desert, uniting the two in a moment of gentle contemplation and thought,” Princess Haya captioned the clip.

The friendship between the pair is easy to see, as the cheetah allows the Ruler of Dubai to stroke his back.

“In a fast paced world of trouble and arguments, magical moments like this allow us to breathe and reflect on nature, freedom and friendship,” added Princess Haya.

Read:
Sheikh Mohammed and Princess Haya help organise aid for refugees
An Emirati woman used an abaya to save a man on fire

It’s not known exactly when the video was made, but it’s already been viewed more than 75,000 times across the royal’s social media accounts.

Sheikh Mohammed has previously been captured moving a building site to help save an endangered bird and its eggs, as well as bonding with a sea turtle.