Demi Lovato Headed Into The Dubai Desert For A Camel Trek 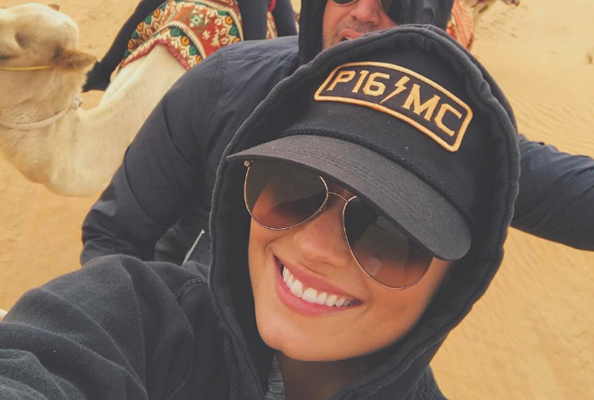 The Heart Attack hitmaker made sure to take in a camel trek during her visit to the emirate.

She was in town for RedFest DXB, but Demi Lovato packed a little sightseeing into her whistle-stop UAE visit.

The Neon Lights singer performed at the Media City Amphitheatre on Saturday as part of the music festival (which was pushed back a day thanks to a stormy Friday).

But the 24-year-old didn’t let the postponement hold her back – she instead headed into the desert with some pals.

Lovato and her gang took part in a camel trek amid the emirate’s rolling sand dunes, and captured the moment on her Instagram page.

The image, which has garnered almost 1 million likes in just a few days, shows the former Disney actress clad in a hat, hoodie and sunnies to battle the desert’s cooler climes.

Lovato – who has a whopping 53 million Instagram followers – later shared an image of her RedFest performance, captioning it: “I love you Dubai.”

Leonardo DiCaprio may have dined at classic French restaurant La Môme during his trip to Dubai last week, but his pal Rihanna opted for something a little spicier.

The Umbrella singer enjoyed a low-key visit to the city over the weekend – so low-key, in fact, we only realised after Miss Lily’s shared a shot of the star at their Sheraton Grand Hotel eatery.

The 28-year-old dined at the Jamaican hotspot over the weekend, though nothing else about her visit is known.

Rihanna was last in the UAE in November, where she headlined a Yasalam After Race Concert in Abu Dhabi.