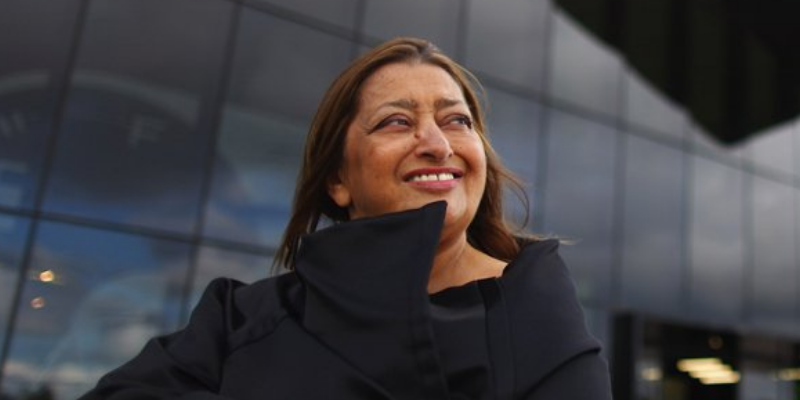 Born in Iraq, Dame Zaha Hadid, an ambitious and pioneering architect, took the world by storm, redefining 21st-century architecture around the globe.

Combining her unwavering sanguinity for the future and her trust in the capability of innovation with progressive design, material and construction advances, Hadid consistently delivered unexpected and spectacular symbols of social evolution.

Exceeding every brief, each of Hadid’s projects has its own presence and place within the architectural realm. With that, we’ve decided to delve into the history of some of Hadid’s designs which have made an impact right here in the UAE.

The Opus by Omniyat– Dubai

Described as “the building that never sleeps”, The Opus by Omniyat is Hadid’s first building in Dubai. Constructed between 2012-2020, the building is home to a collection of residences including the ME Hotel and serviced apartments, each “exploring the balance between solid and void, opaque and transparent”.

The Opus by Omniyat is the first and only hotel that Hadid designed both the architecture and the interior of the hotel. The building is designed as two separate towers which amalgamate into a singular whole, reminiscent of a cube. ‘Eroded in its centre,’ the building acts as a 93 metre tall and 100-metre wide viewfinder, allowing people passing by to focus on the Dubai cityscape, through the building.

When asked about the Opus, project director at Zaha Hadid Architects, Christos Passas, said, ‘The Precise Orthogonal geometries of the Opus’ elemental glass cube contrast with the fluidity of the eight-story void at its centre.”

Organic and sinuous in form, the Sheikh Zayed Bridge was commissioned by Sheikh Sultan Bin Zayed Al Nahyan and established between 1997-2010. The bridge was constructed as a third gateway crossing which links Abu Dhabi Island to the Gulf south shore.

Cantilevered road decks which are suspended from symmetrical steel arches give the bridge a weightless appearance and fluid silhouette mimicking not only the water below but also desert sand dunes. Standing at 842 metres long, the bridge is flanked by a theatrical lighting system which illuminates the complex bridge in varying hues of colour by night.

Deep in Sharjah’s desert is the headquarters of Bee’ah, an environmental and waste management company, which Hadid designed to reflect its surroundings. Desert dunes are mimicked by curved walls, continuous lines and sloping roofs, making the 90,000 square-metre site area at one with the environment.

After her death in 2016, Zaha Hadid Architecture has continued her legacy, creating some incredible buildings in recent years, including the Abu Dhabi Performing Arts Centre, which is currently being constructed, however, the completion date has not yet been confirmed.

Hadid’s architecture within the UAE and across the globe continues to inspire and be admired by many. With her unique stylistic eye and pioneering ideas, Hadid brought architecture to all, and more importantly established modern architecture as artwork.