Crown Prince Hussein deputises for his father the King of Jordan 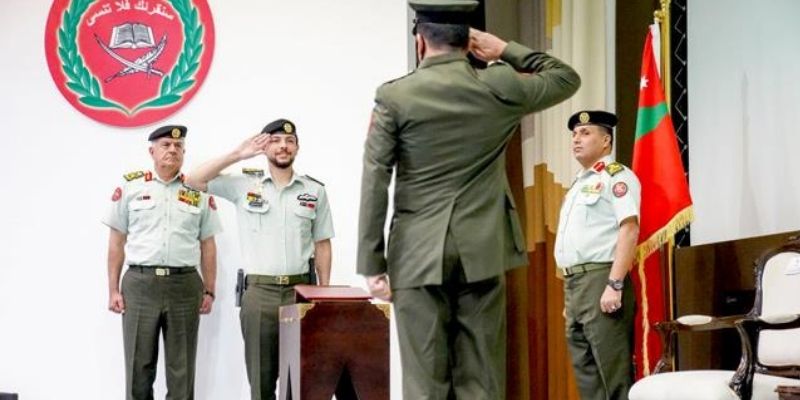 Earlier last week, HRH Crown Prince Hussein attended a graduation ceremony at the Royal Jordanian Command and Staff College as he deputised for his father, His Majesty King Abdullah II of Jordan.

On the special occasion, the Crown Prince of Jordan conveyed his greetings to the graduates by ensuring that the well wishes of His Majesty for the college’s bachelor’s programmes which provide quality education had been emphasised upon.

According to a Royal Court statement, Crow Prince Hussein was received by Chairman of the Joint Chiefs of Staff Maj. Gen. Yousef Huneiti and the college’s commandant. While the participation of JAF security agencies’ officers, in addition to officers from Saudi Arabia, Egypt, Bahrain, the United Arab Emirates, Qatar, Kuwait, Pakistan and France.

Crown Prince Hussein also took a post to Instagram where he’s been seen standing next to his father’s desk in a uniform with a caption that said, “The burden that he has had since assuming the throne, has not been easy. He was the best leader who carried the banner of our ancestors and preserved it, the father of all Jordanians. This is what I witness every day. May God protect you, our master.”

Other Royal Highness including Princes Faisal and Rashid, the public security Directorate Director Maj. General Hussein Hawatmeh, the Mutah University president and a number of other esteemed guests who commanded a military profile in Jordan were also a part of the graduation and ceremony.