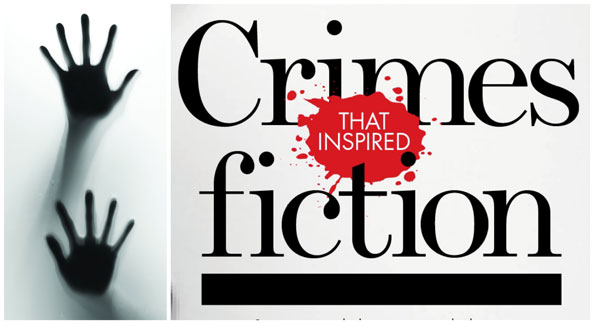 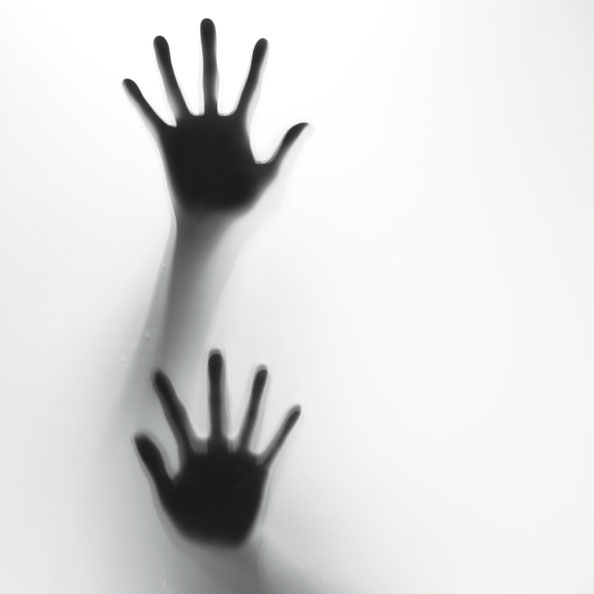 Since records began people have turned to folklore and popular culture for scary tales. But while we enjoy blood-curdling characters like Hannibal Lector and Dracula safe in the knowledge that they were born in a writer’s imagination, that’s not strictly true…

The Fact: Thought to be the most prolific serial killer of all time, Countess Elizabeth Bathory, member of the 16th century Hungarian royal family, brutally murdered more than 650 women. Historians have since nicknamed her The Blood Countess as it’s rumoured that she bathed in her servants’ blood. Her cruelty towards women and young girls knew no bounds, and her brutal means of murder included pouring water over the victim and making them lie outside naked until they froze to death.

Along with four servants who became her accomplices, she created sadistic games in order to satisfy her insatiable love for killing. Though her crimes were discovered, the countess was never brought to trial and she died while under house arrest.

The Fiction: Her raven black hair, alabaster skin, good looks and sordid means of killing made her the ultimate femme fatale for generations of horror writers. Variations of the tale are apparent in many vampire works and some scholars even suggest Bathory inspired Bram Stoker’s Dracula. Most recently, the story has been adapted for the big screen in films The Countess and Bathory: Lady Of Blood.

THE VAMPIRE OF SACRAMENTO

The Fact: This is one serial killer with manners. “If the door was locked, that meant you weren’t welcome,” explained Richard Chase of why he only entered homes with an unlocked door.

Chase’s journey to murder grew from an irrational obsession that his heart was shrinking. Believing that raw intestines and blood would make him stronger, he starting eating rabbits. Between 1977 and 1978 Chase’s obsession grew  out of control when he murdered, disemboweled and drank the blood of six people. Chillingly, his victims were chosen completely at random and ranged from 22 months to 36-years-old. The only thing they had in common was an open door. Chase was sentenced to the death penalty, but took his own life with an overdose of antidepressants.

The Fiction: Centring on a court trial, 1987 film Rampage, tells the story of a young man with paranoid delusions who slays and drinks the blood of his victims. The prosecution battle to prove that he’s sane enough to be given the death penalty.  Though the film’s protagonist, Charles Reece, is deranged enough to kill two women, two men and a young boy, the gravity of his crimes don’t quite measure up to the real character he’s based on. Richard Chase’s victims included a pregnant woman, a child and a baby.

The Fact: In 2008 the world stopped in horror as a woman explained that she’d spent 24 years imprisoned in the cellar of her family home. Her father, Josef Fritzel, had kept her captive between the ages of 18 and 42, repeatedly raping and beating her. Elizabeth bore seven children to Fritzel during her imprisonment, three of which were raised in the cellar and had never seen the outside world.  The terrifying ordeal came to an end when Elizabeth’s eldest child, who was 19 at the time, became ill and had to visit hospital. Fritzel tried to release his captives and claim they’d returned from years in a dangerous cult, but he later pleaded guilty to his crimes and was sentenced to life in prison.

The Fiction: After reading the harrowing details of Fritzel’s case, Emma Donoghue penned award-winning novel Room, which is written from the perspective of five-year-old Jack. This character is based on Elizabeth Fritzel’s youngest child Felix, and gives a fictitious account of being raised in captivity. 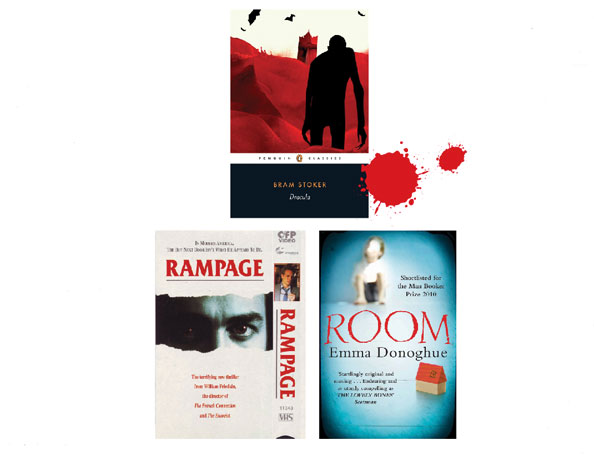 The Fact: Ed Gein has gone down in history as one of the most hideous murderers that ever lived due to the unfathomably gruesome nature of his crimes. Between 1947 and 1952, Gein stole bodies from graves and used the skin to create a female costume for himself, as well as making keepsakes out of bone and body parts. Experts believe this stemmed from an obsession with his dead mother. When his desires escalated he found the need to use fresh human skin, and killed two local women.

Police found corpses and human remains including human noses, bowls and chairs made from skin, and a lampshade made from a human face. He was sentenced to life in a mental institution, where he died.

The Fiction: There seems to be no end to the number of villains who draw similarities to Ed Gein’s behaviour. Buffalo Bill from Silence Of The Lambs, Ezra Cobb from Deranged and ‘Leatherface’ from The Texas Chainsaw Massacre are all modelled on the crazed killer.

Norman Bates’ Psycho and its sequels are the most prominent works to draw inspiration from Ed Gein. The novel’s protagonist, Norman Bates, murders his mother and adopts her personality. This is similar to Gein’s fascination with becoming his dead mother.

The Fact: Somewhere between the lines of pop culture and real life, Rod Ferrell, the leader of a teenage vampire clan, became a murderer. In 1996 he and his followers drank each other’s blood in a graveyard while initiating his former girlfriend, Heather, into the coven and plotting to kill her parents. A few nights later, he and one of his fellow ‘vampires’ snuck into her home in Florida, USA, and bludgeoned her mother and father to death.

He and his clan of four, including Heather, drove to Louisiana where police caught them. The youngsters believed that Ferrell was a 500-year-old vampire named Vesago – the authorities disagreed and, at just 18-years-old, he became the youngest person in the United States on death row. Ferrell’s sentence has since been reduced to life without parole.

The Fiction: The trial turned into a media frenzy and the so-called ‘vampire clan’ became famous. Though blood-sucking beings have been prominent in folklore for centuries, there was a clear renewed interest in the aftermath of the teenager’s trial. Vampire teen-romance went wild and it’s believed the case inspired the likes of Twilight, True Blood and Vampire Diaries. A movie called Vampire Clan, which is directly based on Ferrell and his followers, was produced in 2002 but it was a box office flop. 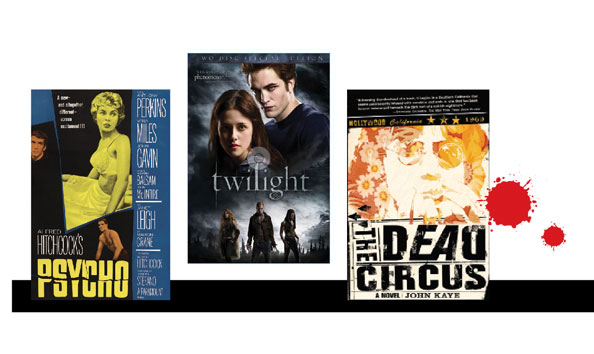 The Fact: Fuelled by the flower power revolution in the 1960s, Charles Manson embarked on a summer of love like no other. Fresh out of prison, his charm, musical talent and authoritative nature led him to build a commune of female followers who, by 1967, had reached 18. They called themselves the ‘family’ and travelled round in a converted school bus, which saw them spend a length of time living with Dennis Wilson of The Beach Boys.

Manson’s controlling behaviour and increasingly violent prophecies began to steer away from that of a self-proclaimed guru and into dangerous cult territory. The rebellious middle-class women who worshiped him were ready to do anything to win his affections, including murder. Between July and August of 1969, under Manson’s orders, the women killed nine people in various Hollywood neighbourhoods, including Roman Polanski’s wife, actress Sharon Tate. She was eight-and-a-half-months pregnant when murdered.

In what became one of the most scandal-ridden trials in history, Manson and four of his female followers were sentenced to death. This was later overturned and they’re now serving life in prison.

The Fiction: As a result of the trial, Manson became world-famous and major bands such as Guns N’ Roses covered his songs. It’s said that heavy metal singer Marilyn Manson and rock band Kasabian named themselves after the ‘family’ (Linda Kasabian was one of Manson’s followers). The facets of popular culture motivated by this case are vast, with an opera titled The Manson Family and a musical called Assassins centering on similar events.

A fairly accurate portrayal of the story has appeared in multiple movies including Helter Skelter and The Manson Family, and the tale has been adapted into over 30 books, both for the fiction and non-fiction shelves. John Kaye’s award-winning novel The Dead Circus is one of the most successful fictional works to draw on Manson’s crimes.