The vast difference in the skies due to coronavirus As the COVID-19 pandemic continues to spread around the globe, the knock-on effects have been monumental. Currently around one fifth of the world’s population has been told to stay home, many countries are in lockdown, businesses have been put on hold and countries’ borders have been closed.

One of the biggest affected industries has been the aviation industry as a large chunk of travel has been stopped. Many flights have been cancelled and airlines are facing up to a total of Dhs918 billion ($250 billion) in losses this year due to the travel restrictions.

However, seeing pictures of the vast difference in the skies in just a month really makes the reality hit home.

In images grabbed from FlightRadar24, you can see the difference one month has made following the global surge in the coronavirus outbreak.

In the screen grab below, the entire globe is effectively covered by planes – you can’t even see the outline of the United States due to the sheer amount of flights. 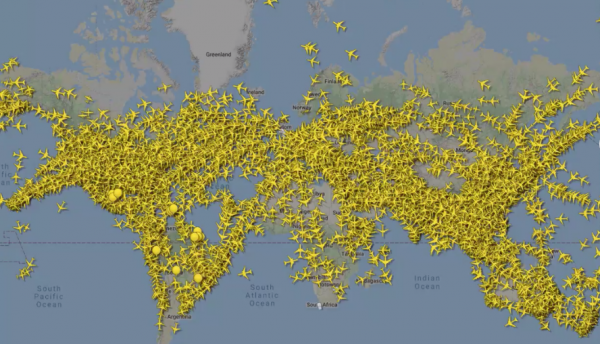 But one month later, the situation is drastically different. There are certainly still a large number of flights in operation as of today, March 25, but in comparison to one month prior on February 23, the decrease is astounding. Just yesterday, the flight tracking engine found there was the lowest number of flights worldwide in one day since December 25, 2016.

However, despite the losses for airlines, there is a silver-lining to the #stayhome initiative, having an enormous impact on the environment.

According to new satellite data, the stopping of air travel, car travel and some industry production has had a positive effect on pollution levels.

“This is the first time I have seen such a dramatic drop-off over such a wide area for a specific event,” Fei Liu, an air quality researcher at NASA’s Goddard Space Flight Centre, has said, according to CNN. “I am not surprised because many cities nationwide have taken measures to minimize the spread of the virus.”

As of today, Emirates airline has suspended all passenger services, per the UAE government’s directions.

The airline has been forced to make some serious cuts in costs over the next few months in order to combat the effects of COVID-19.

Earlier this week, confirmed there would be a three month temporary reduction on Emirates employees’ basic salaries ranging from 25 per cent to 50 per cent.

Additionally, the President of Emirates, Sir Tim Clark, and the President of dnata (the airline’s air services provider), Gary Chapman, will take a 100 per cent basic salary cut for three months.

“Rather than ask employees to leave the business, we chose to implement a temporary basic salary cut as we want to protect our workforce and keep our talented and skilled people, as much as possible,” HH Sheikh Ahmed bin Saeed Al Maktoum, Chairman and Chief Executive of Emirates Group said in a statement, adding the company wanted to “avoid cutting jobs”.