Take a closer look at the UAE’s incredible pink lake 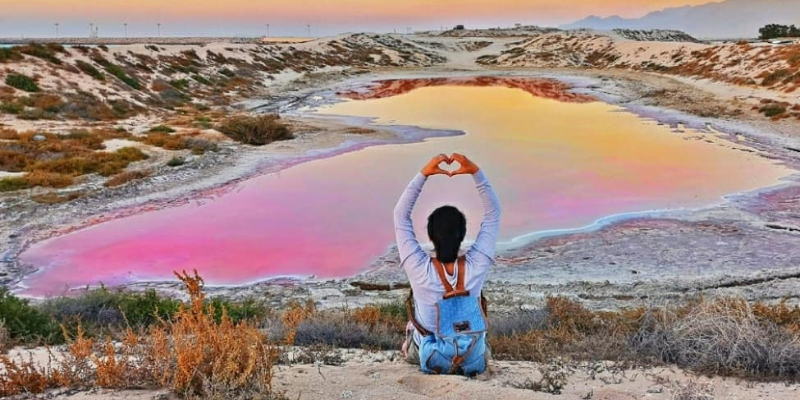 Last week, an unexpected discovery was made in the UAE – a bright pink lake.

The unearthing of this unique nature spot was by an Emirati student, Ammar Al Farsi who is from Sharjah.

The 19-year-old took a series of aerial shots showcasing the incredible discovery.

Now, a travel blogger who is currently in the UAE, has given us an even closer look at the phenomenal pink lake.

Maria, who describes herself as “Dubai’s Dora” which references the popular kids Dora The Explorer, shared a series of photos on Instagram of herself at the pink lake.

“By the way, did you know the UAE is home to pink lakes?” she said in the caption of the photo. “The pink hue is caused by microscopic algae producing beta carotene which diminished all the salt levels fell.

“So, it’s nothing but large deposits of algae and bacteria in salt.”

Similarly, according to the Director-General of the Environment Protection and Development Authority in Ras Al Khaimah, Dr. Saif Al Ghais, it’s something to do with the amount of algae in the water, but this cannot be conclusive until a sample is taken from the lake itself.

“The water discolouration and its transformation to pink is due to the proliferation of red algae, which include more than 4,000 species,” he told Al Khaleej.