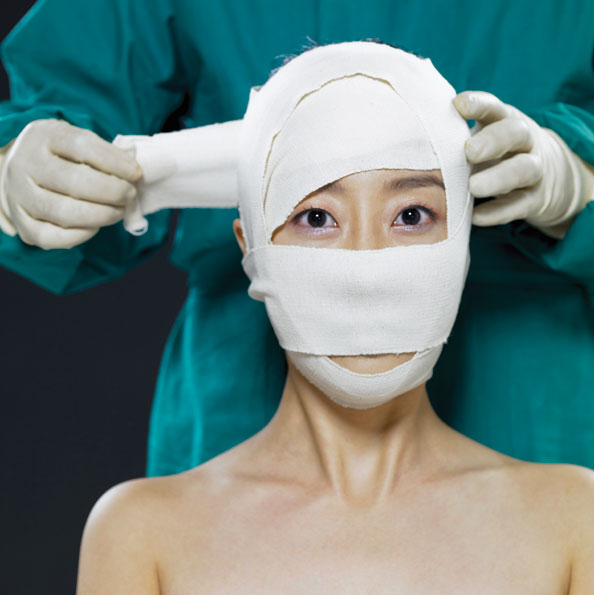 China leads the way for the world’s cosmetic surgery industry, but it’s the nation’s graduates who are going under the knife in a bid to further their careers and increase their marriage prospects.

Emirates Woman first reported on this in April 2013, but today it’s making headlines once more as one of the gentlemen referred to in this article has successfully won his lawsuit. Jian Feng sued his wife for giving birth to what he called an “incredibly ugly” girl. Feng won because his wife never told him that she had US$100,000 worth of surgery to make her look beautiful. She was made to pay her husband US$120,000. Find out more about the surgery craze that’s taking over China…

“Make-up wasn’t enough,” says Jessie Zhang, a 24-year-old graduate from Anhui in eastern China. As a graduate of theatre studies, she felt her looks were holding her back during acting auditions. After being turned down for various parts, she checked into a clinic for cosmetic surgery on her breasts, nose and chin.

“I come from an ordinary family with no ‘guanxi’ (social status),” says Zhang. “My qualifications and connections alone are not enough to secure some jobs. Now I have a perfect face. I no longer get turned down based on looks.”

With popular procedures now available at high street prices (from Dhs1,700), buying a new nose, pair of breasts or eyelids is no longer an option reserved just for the rich and famous. Women in working-class families, such as Zhang’s, can comfortably save for cosmetic procedures. Zhang claims she’s getting more work as a result of her surgery, and has already paid off her treatments through her newfound acting contracts. Shockingly, Zhang is not in the minority.

The cosmetic surgery industry in China has an annual growth of 10 per cent, compared to a six per cent average growth globally. The nation carries out more cosmetic surgery procedures than any other country (apart from America and Brazil). Unlike much of the world, where cosmetic surgery is primarily used to combat ageing and to aid weight issues, the majority of the procedures booked in China are by young people trying to get one step ahead in life.

Approximately three million Chinese people have plastic surgery per year, and staggering proportions of the population alter their ‘natural looks’ in some way, whether it be through regularly undergoing face-whitening treatments or opting for more extreme measures – such as double eyelid surgery or facial reconstruction (nose/jaw and chin jobs).

China’s obsession with a whiter skin colour, for example, has been integrated into everyday living. The nation spends approximately Dhs20 billion on skin-whitening products each year. “Nearly everyone I know uses skin-whitening products,” says 28-year-old media executive Raemin Zhang, who herself uses them on a regular basis. Twenty-six-year-old Shanghai-based secretary Sifra Chen has no doubt there are benefits to having a paler completion. “My employers prefer me to wear make-up with lighter skin. Because they think I look more skilful.”

“There’s a Chinese saying: ‘pale skin covers a hundred flaws on the face’,” explains dermatologist Michelle Ding from Parkway Health clinic in Shanghai. “In ancient Chinese culture, pale skin means a lady is noble, educated and moneyed, as she doesn’t need to work under the sun.”

Psychologist Vivian Diller, author of Face It: What Women Really Feel As Their Looks Change And What To Do About It,believes that there is a status issue at play here. “The colour of skin distinguishes class – darker is viewed as working class, lighter stands for royalty and is associated with the rich and famous. People’s skin darkens from working in menial outdoor jobs. Whiter skin makes you appear as if you can afford an indoor life. It’s more delicate and unusual, which is associated with feminine beauty.”

This national obsession with looks has become heightened with advancing medical technology. Today, record numbers are going to extremes and permanently altering their appearances. “I’ve noticed a significant increase in people asking for cosmetic surgery or cosmetic lasers,” says Ding. “People think the surgery can change their life in finding a better job, ensuring a better boyfriend and making it easier to get a promotion.”

Dr Tony Prochaza, the chief surgeon at Shanghai’s Fine Cosmetic Surgery clinic, says that permanently fixing graduates’ appearances to aid them in the job market is not cheating. “If we can take people who have missed out in the looks lottery and give them a bit of a helping hand to get closer to that same perception of beauty, we give them a much better chance

“If you’re taller, you’re more likely to reach the top of the pile, career-wise. It naturally follows that we use visual cues to subconsciously assess people and we all do it because it’s instinctive.”

Psychologist Diller grudgingly agrees that there’s no denying the results. “Research does show that attractive people, people of a certain height and people who present themselves more fashionably have a greater likelihood of being hired, and a greater likelihood of getting raises.” In Asia the two hottest cosmetic fashion trends are currently eyes and skin colour – both are considered Western features.

“The ideal beautiful woman – globally – is viewed as looking like those who grace the covers of national fashion magazines. These women are mostly white, tall and blue-eyed with Photoshopped perfect skin and thick silky hair. You can count on one hand how many Asian women can be found in the hundreds of pages of Vogue,Elle or Allure, which are read internationally. Rarely do they make it to the covers of these magazines.”

Vicky Wang, a 28-year-old fashion graduate from Shanghai, is a designer. Although she works behind the scenes, looks play a vital role in her industry. “Both bosses and clients want to see good-looking designers, with pretty faces,” she reveals. Wang wanted a rounder, less Asian-looking face, to appeal to her industry’s perception of beauty. “I would wear make-up to make my face seem not so long,” she says. But it wasn’t enough. She resorted to chin reconstruction (a procedure that involves breaking the chin bone, then reshaping it, or adding implants under the skin). “My colleagues and clients have responded really well to me after the surgery. I’ve also found myself a new boyfriend.”

Similarly, Ding Yi, a 24-year-old from Dandong, decided to make permanent physical alterations to aid her quest for love. She opted for one of the most common cosmetic procedures in China – double eyelid surgery. Blepharoplasty involves cutting off a small amount of skin, tissue and fat on the upper eyelid. The eyelid is then folded and the two sides are sutured together, making the eyes look bigger, rounder and more Western.

The sutures are taken off after around seven days and the wounds take a month to heal.

This painful and timely process was worth it for Yi. “Bigger eyes are considered more attractive in China,” she says.  “I would wear make-up and fake double eyelids, to make my eyes appear bigger, but I still wasn’t happy.” She claims that her new eyes have made all the difference to how she’s perceived by men. “I’m more popular among guys. I’ve recommended the procedure to my single friends with single eyelids.”

With more and more people changing their appearance to find a better suitor, the moral connotations of cosmetic surgery prior to marriage in China is a hot topic. A recent law case saw a husband suing his wife for giving him an ugly daughter. Feng Jian was adamant his wife had been unfaithful and booked a DNA test, which proved that he was in fact the father of what he referred to as the “incredibly ugly” baby. The wife later admitted that she’d had cosmetic surgery before she’d met him. He not only divorced her but later sued her for Dhs440,000 for marrying him under “false pretences.”

“Where do you draw the line?” asks Diller. Intelligence aids could also be addressed in this ethical debate. “Some people are born with higher IQs and other people have to work harder,” she says. Should cosmetic surgery be regulated like students popping performance-enhancing pills? “Students are now taking Adderall [a combination of amphetamine and dextroamphetamine given to those affected by ADHD] to improve their test results. It’s become an epidemic. It’s likely there will soon be drugs tests before exams. If there is a medicine you can take that will make you pay attention more, or if there is surgery that can be done prior to interviews – it does raise ethical questions.”

Then, of course, there are the immediate dangers of mass-scale cosmetic procedures to consider. Diller accounts three psychological side effects to permanent cosmetic surgery and creating a permanent homogenised look.

Firstly, “the feeling of happiness, and having high self-esteem goes a lot further than superficial changes,” she explains. More often than not, it’s your internal dialogue that leads to self-esteem. “A supportive attitude towards yourself is not always guaranteed when you change the way you look. This is often apparent with people who have lost a large amount of weight.”

Secondly, fashion, work and love can change. This homogenised look may be in today, but may go tomorrow, and you may be stuck with a rack like Pamela Anderson’s forever. The same concept applies to your career and relationships. Diller would advise people to make sure they are making changes for themselves and not for a third party.

The final worry is if you don’t feel yourself after surgery. “I’ve worked with people who have made a change to their eyes or nose and then they’ve missed that identity that they’ve lived with for 20 or 30 years,” she warns. “They don’t realise until it’s done. Some people say ‘I’m delighted with the change’ and for those people, great. But there is a risk involved.”

Our advice: try everything else before you make that permanent physical alteration. Hire a stylist, experiment with your hair and make-up and consider all options before going under the knife.