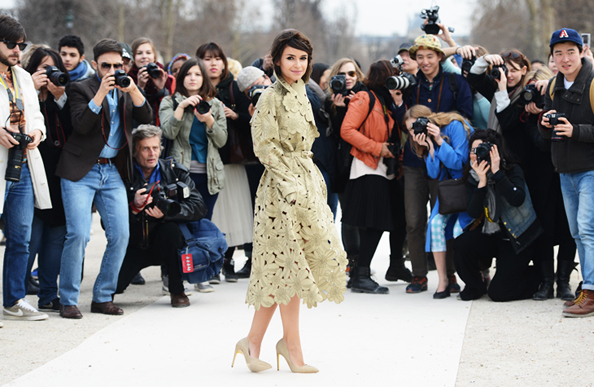 His photographs are some of the most sought after in the publishing industry. Tommy Ton, the creator of the blog Jak & Jil, is one of the original ‘street style’ photographers. Travelling the world and descending upon the streets of London, New York, Milan and Paris, he offers us a view into the sartorial lives of the people who make the fashion world go round. But now, for the first time ever, a recent documentary turns the camera on Tommy Ton.

Chasing Tommy Ton is a short documentary by director Christina Voros and Daily Candy, turning the camera on the somewhat shy man and giving a rather intimate portrait of the life of this great talent in an increasingly competitive industry. It’s surprisingly honest and beautifully shot, with some incredible animated photographs.

So who is Tommy Ton? Canadian Thomas Ton was lucky enough to discover his passion for fashion at the tender age of 13. Watching a clip of Tom Ford, discussing his Gucci collection, he was in awe with both Ford’s work and his eloquent reflection on it. Determined to get into the fashion industry he dabbled with fashion design and completed an internship at a major Canadian department store.

It was then that he decided to launch Jak & Jil. It was originally intended as a web magazine, but once Tommy Ton took to the streets and discovered both a passion and talent for ‘street fashion’ photography, it quickly evolved into the blog format masterpiece it is today. With over a million hits per month, his is the most recognised website and name in street style photography after Scott Schuman of The Sartorialist.

Talking about his early years, Ton says: “I wanted to crash the party and just wanted to document these beautiful creatures.” Interestingly, despite his subsequent ascension in the circles of the fashion elite (Anna Dello Russo often gushes over his ability to identify designer pieces and recognise which collections they come from), he often prefers to stay on the periphery and observe from a distance – “I still feel like this nerd that’s watching in, and wanting to be part of it.”

Here are some of our favourite quotes from Chasing Tommy Ton:

On telling people what he does: “I’m kinda like… a fashion documentary photographer?”

On fashion weeks: “It’s very much like the Olympics of fashion.”

On being inspired and grateful: “Being about to create and be a part of the world of fashion is just more than I could ask for… Not a lot of people in this world are able to find things they’re passionate about.”