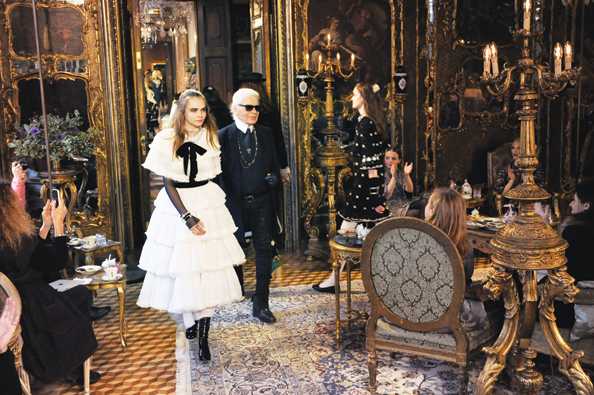 In the snowy climes of Salzburg, heart of Baroque architecture and home of Mozart, models with Heidi-style braids wound into earmuffs, wearing gilded loden jackets buttoned over courtly ruffled blouses, moved through the candlelit chambers of Leopoldskron Castle. Picture woodsmoke clouding over the still grey lake that lay beneath the majestic 18th century palace, grand marble staircases, hulking fireplaces and circular tables laden with Austrian delicacies in a breathtaking re-imagining of Rococo opulence.

Welcome to the prodigious extravagance of the shamelessly nostalgic fantasy world Karl Lagerfeld pours onto his Métiers d’Art catwalk. 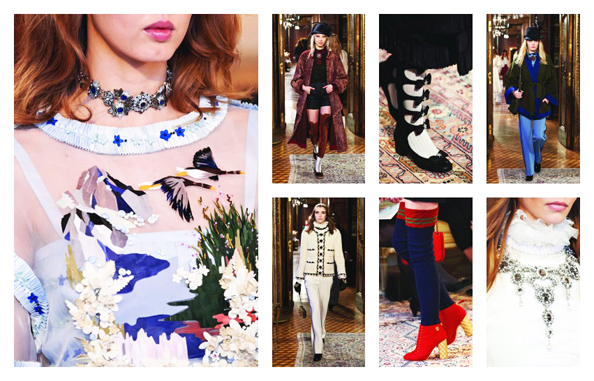 A feat of jaw-dropping creative excess, this collection is an annual salute to the thrilling craftsmanship of the millinery, feather-making, gold-smithing and shoe-making of Chanel’s artisans.

There is a strong narrative behind the show that both celebrates the skill of its couturiers and unveils a new historical facet of the Parisienne house. Chanel has travelled from Byzance to Bombay, Edinburgh to Dallas in seasons past to reveal the glory of its workshops and bring to light fresh chapters in the colourful career of its celebrated namesake. 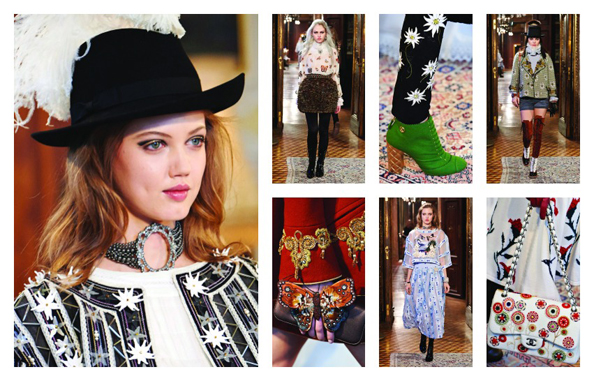 By giving new life to Alpine chic, Lagerfeld tells the tale of how Gabrielle Chanel found inspiration for one of her most iconic designs in a four-pocket jacket worn by the lift boy whilst staying at the city’s Mittersill hotel (owned by Baron von Pantz, with whom she once enjoyed a romance.) The genesis of the classic boucle jacket, cross-pollinated with regal dress references coming from the legendary and ill-fated Empress Elisabeth of Austria, was the fusion behind the Métiers d’Art Paris-Salzburg fairytale.

Lagerfeld’s magnificent ode to Mittleuropa was created by calling upon each of the house’s partners to play their role in his rich and complex masterpiece, with hatmaker Maison Michel, embroiderer Lesage, cashmere producer Barrie, boot-maker Massaro, the jeweller Desrues and master corsage-maker Guillet.

Aiming to preserve the skillset that defines French fashion, Chanel acquired ten specialist ateliers in 2002 under its subsidiary company Paraffection, ultimately saving what has become a dying breed and ensuring a future for haute couture.

At odds with mass production, the artisans’ work is painstakingly slow.

“It depends on the design but we’re definitely not talking about two-three hours, it’s more like 200-300 hours,” says Nadine Dufat, Director of Maison Lemarié, the fashion institution founded during the Belle Époque, whose speciality lay in making all things feather and, of course, the famed 16 petal camellia. 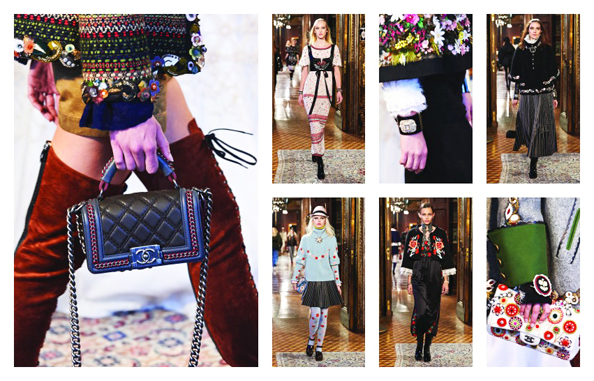 Under the fiendishly clever tutelage of Lagerfeld, the swirling golden frogging, the velvet transformed into mountain flora and the clusters of lustrous pearls that determine the character of the clothes and accessories, all come together to form the maestro’s spectacular mise-en-scène.

“The real job for us is to understand what they want and to transform it into what we know,” explains Dufat. But the maisons will never know if the sample will be used to cover a coat, decorate a bag or embellish a pair of shoes. “We never see the finished product and never know where the item will be used until seeing it at the show.”

Handwritten sketches are given to the artisans or ideas talked out by Lagerfeld just two, sometimes only one month prior to the show. “I love the feeling of the beginning… I love the imagination and vision of what we’re going to create – and that’s amazing, the feeling that it leads to making a ‘dream’, a ‘vision’ come to life,” muses Hubbert Barrere, Artistic

Director of Lesage. “I’m very passionate about culture, music and literature, and try to reflect that in the collection, but in the end, our work is guided by the demands and vision of Karl. We need to achieve what he envisions in  every collection.”

With more than 60,000 embroidery samples in its renowned archives – one of the biggest collections in the world – holding thousands of motifs featuring pearls, paillette and precious stones, Lesage’s team take some of their inspiration from the old to create the new. 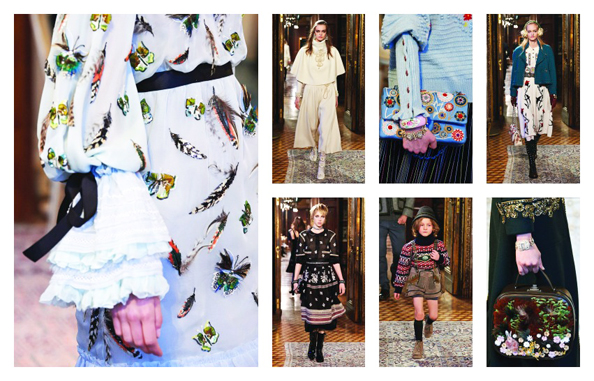 A wealth of research goes into the design and the narrative the houses are employed to help tell. “That’s the spirit and motto, to stick to the origin of the story… I imagine, what can we propose to Karl what is new, fresh and beautiful embroidery? First, it is the town of Mozart, and it is a musical town… second, I imagined the parallel between Sisi (Empress Elizabeth) and Coco… they were both very strong and independent women in their lifetime and they were at opposition with their time.” Barrere proposed butterflies, “something fresh, simple and happy in embroidery”. Just one of the seemingly endless elaborate elements that make up the 88 look collection – think ostrich-plumed Bavarian hats from Maison Michel, tri-tone skirts from the pleater Lognon, fingerless shearling winter warmers from glove-maker Causse, costume jewellery from Desrues and Lunéville beading from Montex.

“Technically, Métiers d’Art is not that different to ready-to-wear or couture, it is something between the two, but for me, it is closer to couture because it is so sophisticated,” says Barrere. Anything that looks like a print is actually embroidery – curlicue stitched breeches, edelweiss sewn into woollen tights – the man-hours involved in such delicate feats involve rigors of another kind. No machine is used in the house of Lesage, a single piece can take anything from 100 to 1,000 hours to complete and in the case of the Salzburg collection around 70 people to make the magic happen. 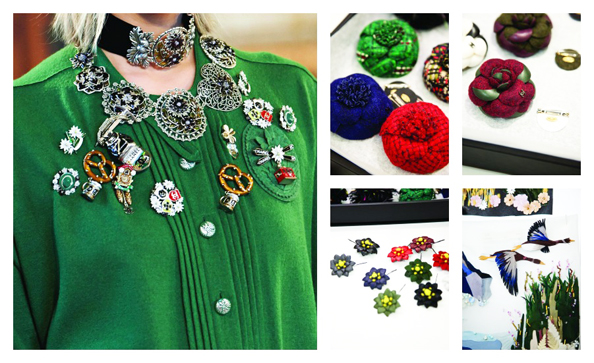 This is demi-couture in excelsis. Paraded from afar, the astounding skill involved in creating genius effects of feathers densely trimming jackets or butterflies painstakingly embroidered onto diaphanous beribboned gowns is impossible to detect with the naked eye. “Maybe not so obvious when you’re watching the show from a distance, but each time you go near a piece you can find there are lots of difficult details to appreciate,” explains Dufat. A wildlife tapestry grows across a leather cape, the rabbits made from fur, the woodland floor from manipulated feathers, a handsome pair of flannel trousers bear hand-beaded side-stripes and cut-out boots twinkle with crystal encrusted corsages. This level of intricacy can only be truly awed close-up.

“The people who work at the maison are not artists, nor are they workers… I don’t believe I have any French or English term to describe who they are,” ruminates Dufat. Lemarié’s use of everything from swan to vulture feathers is an almost operatic exercise in pure technique, dying, curling, thinning and even pounding to create the unimaginable, be it a dramatic peacock cape or fragile chiffon and feather rills edging the sleeves of a sheer blouse. The house is also famed for transforming tweed, tulle, muslin, paper and plastics into beautiful dahlias, roses and orchids of all shapes and sizes. 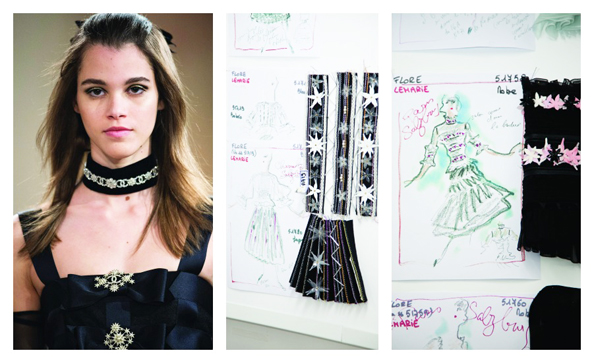 Lagerfeld showcased the Métiers d’Art to vivid effect, decade and century-hopping with looks that trumpeted typical Tyrolean dress, clichés and all, but the designer’s real feat was just how modern and luxe the collection felt, compelling his audience to shelve disbelief and yield to yet another fantastical illusion.

Post-show, there is no time to marvel in its success. “Of course, seeing the show is amazing and wonderful and it is an honour for me, but when the show is finished, it is finished. I move onto the next collection because we have to work on new collections every month and a half, so you have to move quickly,” Barrere says.  With eight collections a year to produce, there is no rest for the artisan collective, but for now, the hills are alive with the sound of Chanel.