When Karl Lagerfeld set his sights on Dubai’s skyline as inspiration for his latest cruise collection we knew it was not going to be some ho-hum, average kind of show. After all Karl and Dubai do have at least one thing in common – neither of them do anything by halves.

The 1,200 specially selected guests that included Vanessa Paradis, Freida Pinto, Tilda Swinton, Dakota Fanning and Princess Ameera al-Taweel were invited to Sheikh Hamdan’s private man-made island, to a giant majilis, made especially for the show – rumour has it, it cost Dhs3.5 billion. The dazzling structure was constructed from gold and glass, and flanked by fake date palms. The famous ‘double-C’ logo was weaved into a mashrabiya lattice work which adorned the walls.

The fashionable tribes gathered at kite beach, and boarded traditional wooden abras that ferried them to the island shore, with salty wind in their hair as they waved goodbye to the sci-fi-style skyline. Some wavered in their heels, completely abandoning the dress code of ‘island chic’ in favour of stacked, sky-high platforms and chic Chanel suits. However, the celebrities looked at ease – even in the 90-degree heat, Freida Pinto couldn’t hide her excitement taking so many photos she could’ve been mistaken for the paparazzi. Narina Actress Tilda Swinton happily mingled with the crowds proving that even though she may look like a beautiful ice queen she is in fact the epitome of manners and grace.

As dusk descended the guests sunk into their lounge seats and were treated to a magic carpet ride of looks. Think 1970s Talitha Getty in Morocco – all big bouffant hair, big lashes, smoky kohl with big accessories. Lagerfeld also stole from the menswear using the chequered headscarves with keffiyeh print weaved into chiffon and thawbs or dishdashes were prettily cut from cotton. Tweeds, adorned with heavy metal hard wear, that even though nodded to the nomadic would be perfectly at ease in the office. While the balloon harem pants and kaftan-esque pieces offered the perfect holiday attire. Accessories had a sense of humour. We loved the bag formed into the shape of a jerricon – the oil canister you find in the boot of 4×4 is a very familiar site in the Middle East – but, of course, this was formed from gold, quilted leather instead of plastic. And a bag that totally blinged. So Dubai! With light-up strobe lights that flashed to the beat of the music. 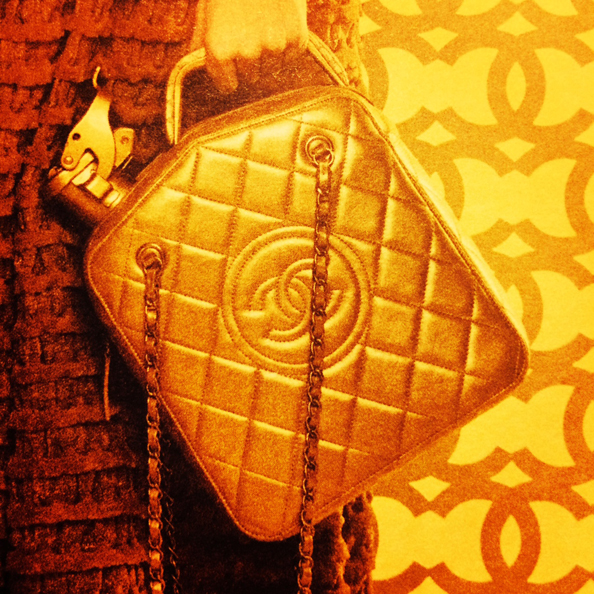 The guests gorged on whole roasted lamb, falafel and Arabic pastries and listened to the cool beats from American singer Janelle Monáe, with the smell of shisha filling the air, that concluded Karl’s business in Dubai. He said: “With the highest building, I thought there was a reason to show the highest fashion, ha-ha-ha-ha.” We couldn’t agree more.