The Bootcamp Beloved By Many A Celebrity Is Coming To Dubai

The Kim Kardashian-approved workout is set to open its first studio in the Middle East.

If you’ve ever found yourself admiring a celebrity bod (who hasn’t?), chances are it was sculpted to perfection at Barry’s Bootcamp.

The Los Angeles-based gym opened in 1998, and has locations all over the US, as well as in Norway and London.

Now the fitness craze, which counts Kim Kardashian, Kanye West, Ellie Goulding and Jake Gyllenhaal among its fans, is finally headed for Dubai.

According to the Barry’s Bootcamp Dubai Facebook page, the Dubai studio will be located in Central Park at DIFC. News of the opening has been teased for a while, but we have it on good authority the official launch event is happening in March. 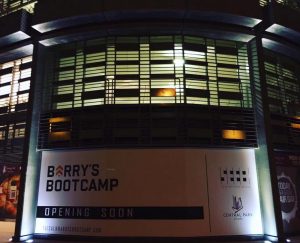 Read more:
6 Fitness Apps Everyone Should Have
BARE Fitness: The Coolest ‘Non-Gym’ In Dubai

So what exactly is Barry’s? The workout is described as a one-stop, results-driven class, which pushes participants to their physical and mental limits.

The signature hour-long workout involves 25-30 minutes of interval cardiovascular treadmill routines, and 25-30 minutes of strength training. In one class, you can apparently expect to burn up to 1,000 calories.

While it might sound hardcore, the vibe is said to be more like a nightclub than a gym, with a killer playlist to boot.

We’ll be sure to let you know as soon as we find out more, but for now, you can follow Barry’s Bootcamp Dubai on Facebook and Instagram.