Brad Pitt & Jimmy Fallon In Breakdance Off | The Tonight Show 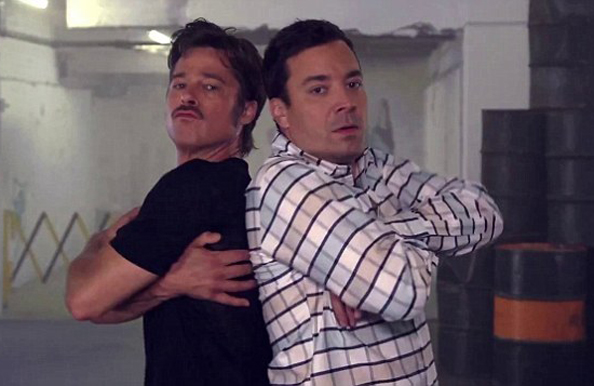 OK so dodgy moustache and 1980s haircut aside, smooth mover Brad Pitt still managed to earn himself some cool dad points when he decided to take on comedian and The Tonight Show host Jimmy Fallon in a conversation breakdance.

He may be 50 but actor Brad Pitt showed he still has  a figure many men in their twenties would envy. The devoted father of six, who recently wed his long-term partner and fellow actor Angelina Jolie, body popped with Jimmy Fallon in an hilarious three-minute sketch for The Tonight Show. The mini video was filmed while Brad was in New York to promote his new film Fury.

Throughout the skit no words are actually spoken – all that has to be said is said through the power of dance. While the serious breakdance moves are clearly performed by body doubles, Brad does manage to show off some Footloose-esque moves of his own. Sorry David Beckham, it looks like Brad Pitt is winning on the cool dad stakes.