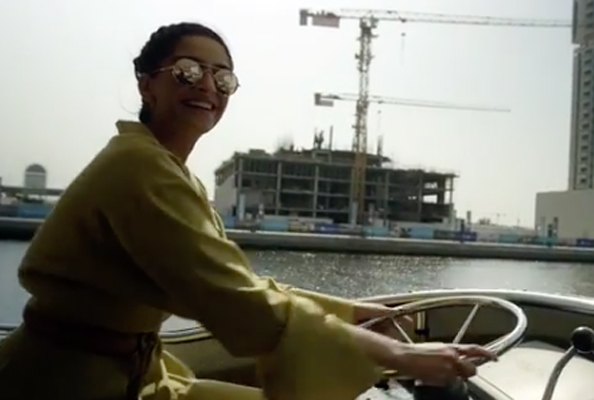 The actress also did the mannequin challenge at the Burj Al Arab during her visit to the emirate.

Dubai isn’t a stranger to a Bollywood star or two, however one really took the wheel during a visit to the city.

Sonam Kapoor recently jetted in to the emirate, and looks to have been getting a very hands-on experience of Dubai’s newest sights.

The Prem Ratan Dhan Payo actress shared an Instagram video this week of herself captaining a boat down the recently-opened Dubai Canal (something we’ve been rather keen to try).

#MyDubai with @RheaKapoor was the perfect holiday to start 2017 with. Couldn’t resist taking over from the Captain when yachting through the new Dubai water canal

Kapoor, the daughter of legendary actor and producer Anil, was joined on the trip by her producer sister, Rhea.

The actress also slotted in a spree at The Dubai Mall, where she looked quite taken with an armful of Fendi bags.

What do you mean I have to choose at @Fendi? Er… I think not! #MyDSF

The sisters also had some R&R time at the Burj Al Arab, where the pair took advantage of the seven-star hotel’s cabanas.

The twosome even pulled off a mannequin challenge in the luxury sun-spots, which contain fully-stocked mini bars, espresso machines and Bang & Olufsen TVs.

Statue! At our awesome cabana at the @burjalarab