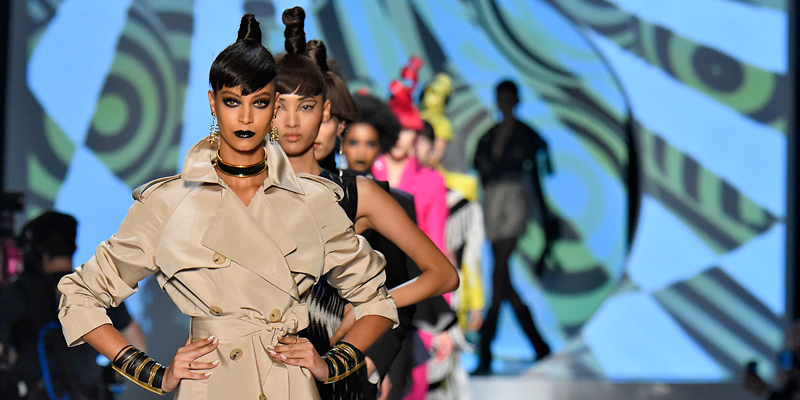 It’s the first sartorial spectacle of its kind to be held in the kingdom.

Saudi Arabia will be setting the style pace this month, as the kingdom holds it first-ever edition of Arab Fashion Week.

And the schedule for the much-anticipated event has been released, with 16 designers set to grace the catwalk in Riyadh between March 26 to 31.

Read:
All you need to know about this modest fashion festival in Dubai
Saudi Arabia is set to host its first ever Arab Fashion Week

Held at the capital’s Ritz Carlton, both Cavalli and Gaultier will hold shows, so we’re expecting exotic prints from the former, and architectural silhouettes from the latter.

Many homegrown labels from the region will also be showcasing their collections, including Saudi’s Aram Designs and Reem Kanhal, Lebanon’s Naja Saade, the UAE’s Aiisha Ramadan and Egypt’s Asory House.

Also flying in for the event is Russia’s Yanina Couture (which has dressed celebrities including Kate Hudson and Gigi Hadid), US label Fllumae, Brazilian brand Alexandrine, Italy’s Mua Mua Dolls and Kazakhstan’s Bibisara.

Tickets will be available online in the near future, with the event lauded as marking a new chapter for the kingdom.

“We are excited to see the fruits of the effort to launch this event in a relatively record period, and we thank the global support shown by the international fashion community, which strongly reflects the firm position of Saudi Arabia not only as an economic force, but also as a cultural and creative hub.”

HH Princess Noura also highlighted that the fashion week comes during a new chapter in the kingdom’s history, one where women will soon be allowed to drive.

“This is a new era that we are witnessing, an era where ‘only dreamers are welcome to join’ to use the words of HRH Prince Mohamed bin Salman bin Abdulaziz, Crown Prince of the Kingdom of Saudi Arabia,” the royal added.

Read:
Social media influencers in the UAE will now need a licence
Here are 7 times that Queen Rania stunned in Givenchy

The news follows the recent opening of an Arab Fashion Council office in the kingdom, as well as the appointment of HH Princess Noura, and a second Riyadh-based AFW has already been scheduled for October.