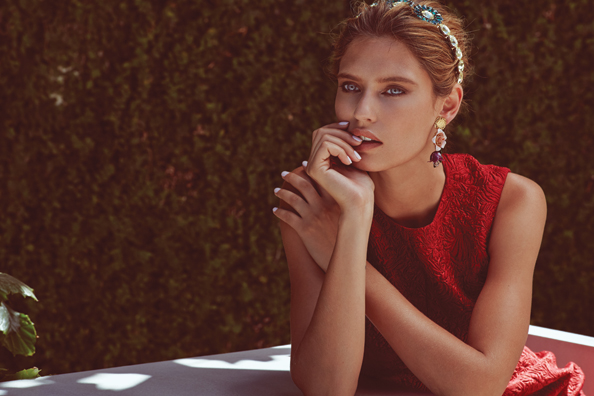 Italy’s most incandescent export, Bianca Balti, talks exclusively to EW about her life-changing collaboration with Dolce&Gabbana, on working with mega successful male model David Gandy, and why she refuses to become a cliché if she ever hangs up her modelling shoes…

Bianca Balti is giggling hysterically. The drop-dead gorgeous 30-year-old, who Playboy recently described as “The world’s hottest Italian supermodel”, has accidently dropped a velvet bag into the swimming pool during our LA shoot. Far from letting this stress her out, the delightfully down-to-earth Bianca, who turned up in a black jersey dress, with wet hair, no make-up and big glasses – looking effortless – immediately sees the funny side, laughingly telling us, “It’s OK, tell D&G it was me,” as she fishes it out. Throughout the day it becomes apparent that the model takes a light-hearted approach to most things. She’s also refreshingly candid.

Of course, Bianca has a lot to smile about. The face of Dolce&Gabbana and L’Oreal, she’s one of the three best-paid models in Italy, alongside Eva Riccobono and Mariacarla Boscono. Currently starring in Dolce&Gabbana’s new Light Blue campaign with   David Gandy, a grateful – and gracious – Bianca admits she has no idea what she would be doing had Domenico Dolce and Stefano Gabbana not made her  a successful model. 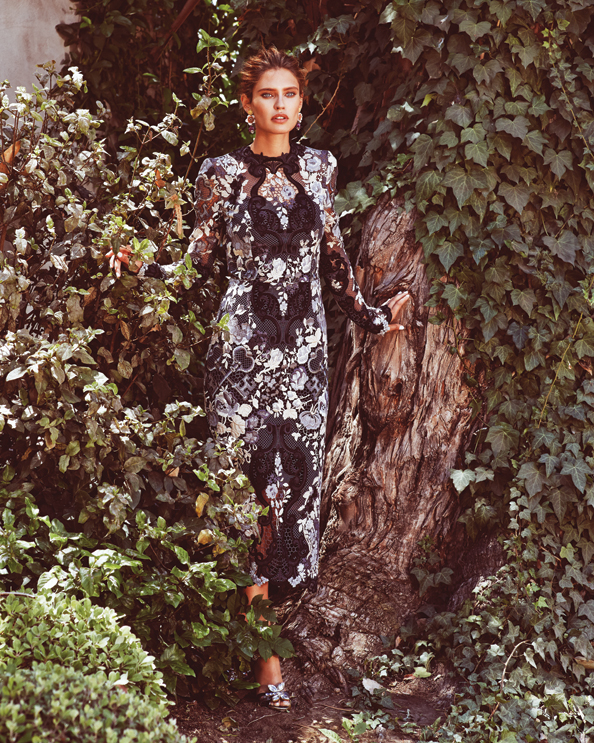 Lace embroidered midi dress, Flower earrings
Sandals as before, all by Dolce&Gabbana

“I think it was meant to be,” she muses. “I think that was the plan God had for me. I live one day at the time and I don’t stress myself out too much thinking about what it would have been or what it will be.”

Fiercely faithful to the design duo, the naturally stylish brand ambassador insists that Dolce&Gabbana is her favourite label. “When I go to their boutiques I can pick up the outfits for my everyday life as well as my special nights and events. They have a realistic view of women, they love women and they have such good taste. Not many designers have this ability.”

With her gioia di vivere, Bianca is truly Italian in spirit and passionately patriotic – something which has helped to seal her watertight bond with the stealthy Sicilian team.

“My relationship with Dolce&Gabbana is one of deep respect. I’ve always admired their work and seeing them working so hard just made my respect grow even more. They own everything they have,” says Bianca. “They are hard workers, proud Italians and have the best sense of style ever. I love them and I am forever thankful to them for believing in me. I would never let them down. They make me so proud to be the face for their brand, because they are so much more than simply a brand: they are a loving family, hard workers and great people!”

The model is equally effusive when it comes to David Gandy, her British co-star in the campaign.

“Working with David has been a great honour and an amazing experience.”

We argue that it can’t be all that difficult working with someone so gorgeous that J-Lo described him as “almost perfect”, but Bianca insists that David is “a businessman above all, not just a male model, with a similar approach to the fashion business that I have… it is work, not life, and you do the best job that you can do. Professionalism first, no bullsh*t!” “He is well aware of his own hype,” she adds frankly, “and one of the few models who was able to build up an empire out of his beauty. And he’s got such an amazing body!”

An equally upfront David, who has stated on record that he does not enjoy working with the world’s highest- paid model, Gisele Bündchen, and who claims that playfulness is the single most attractive quality in a woman, returns the compliment.

“Bianca is fantastic, her sense of humour is hilarious and we spent a lot of the shoot laughing together and having a great time. I met Bianca before when we shot Dolce&Gabbana Optical Collection campaign and got on very well with her. She is so easy to work with. I feel she brings a new edge to the campaign, a real true Mediterranean influence, which translated so well in the campaign images,” says David.

With the whimsical Mediterranean setting of Capri, the glistening blue water and the magnetic gaze between two lovers, what’s not to love about it?

“To see Bianca with David brings a renewed, relaxed energy to Light Blue,” say the designers. “Together, their eyes match the colour of the water, that beautiful endless blue that is the Mediterranean surrounding Capri. Watching it is to dream of plunging into that refreshing sea and feel the sun on the skin, to feel totally free, relaxed and at peace.”

Her smouldering onscreen presence is undeniable, but Bianca is adamant she won’t be heading for the Hollywood hills any time soon. “I don’t want to become an actress and I don’t want to become a fashion designer. Those are all clichés for retiring models that don’t suit me at all,” she states, almost derisively.

It’s yet another example of how close to terra firma she manages to stay. “It’s easy for me to stay grounded because I know I am just a girl, a mother, a daughter, a lover, a normal person, who was lucky enough to do this job. I know it is my job and not the person I am,” she says simply, insisting that a combination of luck and savvy decisions has helped her glittering career – and its longevity. 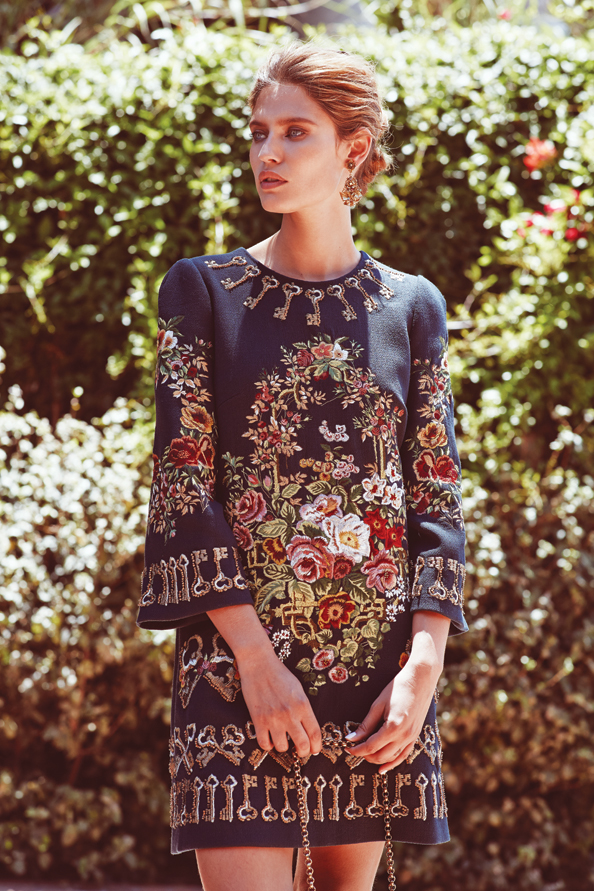 “Beauty in this job is not everything. The smart choices I made through the years took me here. And   as long as God wants me to do this I will do it to the best of my abilities and professionally. I am a very blessed girl.”

As the mother of seven-year-old Matilde, Bianca is even more vigorous in the choices that she makes today. She resides in Marbella where her daughter goes to school and when Matilde is on school holidays they live in in Orange County, California.

“Motherhood has taught me responsibility. I cannot think of myself only anymore, before making a  decision I always have to think about the impact it has on my daughter too. It has taught me also to do my best, which is a learning process – progress rather  than perfection.”

She shows us one of her tattoos, the letter ‘M’ on her finger, which she says is multi-functional. “My partner thinks it is for him and my mum thinks it stands for Mummy. But really it’s for my daughter Matilde.”

While Bianca agrees that women, no matter what their profession, will always have to make sacrifices in balancing motherhood and careers, she counts her blessings that she has the luxury to create her own schedule. “I am able to push jobs to different dates so that they don’t clash with my daughter’s birthday or her first day of school.”

But she has absolutely no regrets about being a working mum. “I always tell myself that having a responsible mother who has a career is a good example to my daughter, no matter what.”

“My daughter doesn’t travel with me, she goes to school and has a normal life,” Bianca levels.  That’s not to say that Matilde doesn’t aspire to achieve greatness.

“My daughter understands what I do. When we lived in Italy a lot of people recognised me. I think in a way she doesn’t like the attention on me, but at the same time she would like in the future to be an actress, or something famous anyway…”

She still believes in the institution of family and would love to have more children – “at least another two,” she says adding, “I still have faith in having a united family. Family to me is the most important thing in the world!”

Italian women are known for their love of food, clapping their hands together in glee when a beautiful dish is delivered to them and Bianca is learning every day how to be a better cook. “To feed my loved ones is pure love! When my daughter says she loves something I cooked it’s a wonderful feeling.”

She swears she doesn’t work out – “I’m the laziest person there is. I know I will have to start exercising soon because it will catch up with me. But I always say, ‘Maybe next year…'” – and like most people who reside in the Med, simply follows a healthy lifestyle, rather than a stringent diet. “I have no diet at all, I don’t like regimes of any kind. But it might change with age. I care about my figure and when my metabolism changes, I will make changes.”

Matter-of-factly cautioning aspiring models not to become caught up in an unachievable dream, she says, “If it works, it works, if it doesn’t, go to school, don’t lose the precious years where you’re supposed to build up your future running after this dream to be a model.” She also accepts that being famous is twofold.

“Truthfully, to be in the spotlight is sometimes fun, sometimes it’s annoying. It has been good for my self-esteem to become a successful model, but when people recognise me I feel uncomfortable and goofy.”

It is precisely this self-effacing, real quality that keeps her fresh. In an industry that is typically, and somewhat cruelly, short-lived, this is one model destined to stay relevant for a long time to come.

Dolce&Gabbana Light Blue is available at all leading department stores and perfumeries. All clothes by Dolce&Gabbana. Bianca Balti @ Brave Models 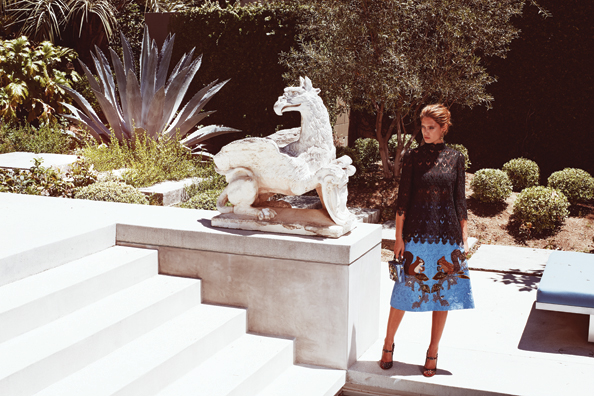 This interview appeared in the September issue of Emirates Woman. Download it now