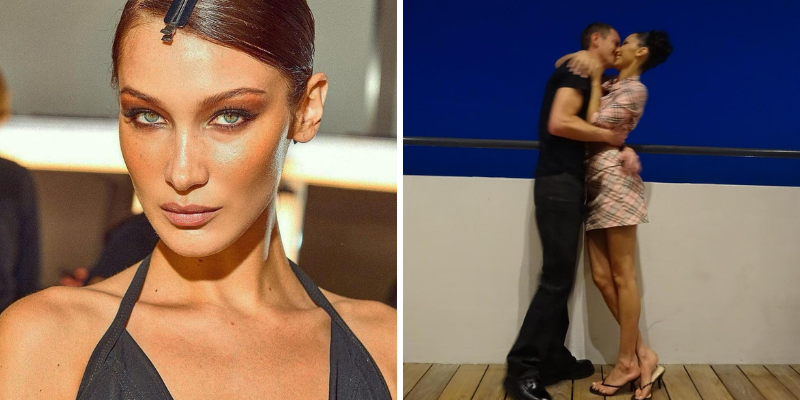 Bella Hadid is officially no longer single, having gone public with her new boyfriend, Marc Kalman.

The supermodel subtly confirmed their relationship on Instagram in a carousel of photos, sharing a sweet snap of the pair kissing at the end.

“Time of my life… Healthy, Working and Loved,” she captioned the post.

So, who exactly is the new man in Hadid’s life?

Well, according to reports the pair have been quietly dating for a couple of months and the 24-year-old reportedly decided it was time to go public now things had “become more series”, according to E! News.

Kalman works as an art director in New York City and has previously worked with rapper Travis Scott, the boyfriend of Kylie Jenner, on his album art. Per his website, he’s also worked with Japanese fashion brand A Bathing Ape on their branding.

As Kalman and Hadid both work in the fashion industry in New York City, they met whilst working and have “crossed paths several times”.

“He has been the creative behind many fashion projects and they have crossed paths several times,” the E! source claimed.

How long have they been dating?

To public knowledge, Hadid has been single since splitting from her on-again-off-again boyfriend The Weeknd back in August 2019. The pair had been dating since April 2015.

As for how long Hadid has been seeing Kalman, it remains unconfirmed, but the Daily Mail published photos of the pair together back in June claiming there was a budding romance between the pair.

According to E! News, the couple have been keeping it “super low-key and private”, but Hadid going public on Instagram shows that they are “serious”. “She is truly so happy right now,” the source said.

However, it’s unlikely the pair are going to be very public with their relationship, as Kalman’s Instagram is completely private, although the pair do follow one another.

He’s got the family seal of approval

While it’s still early days in their relationship, the couple have received the family seal of approval from Hadid’s mother, Yolanda, her elder sister, Gigi, and her boyfriend Zayn Malik.

“She’s introduced him to her family and they all think he’s a great guy,” the E! News source said. “He’s hung out with Gigi, Zayn and Yolanda on several occasions and they all approve and love him.”