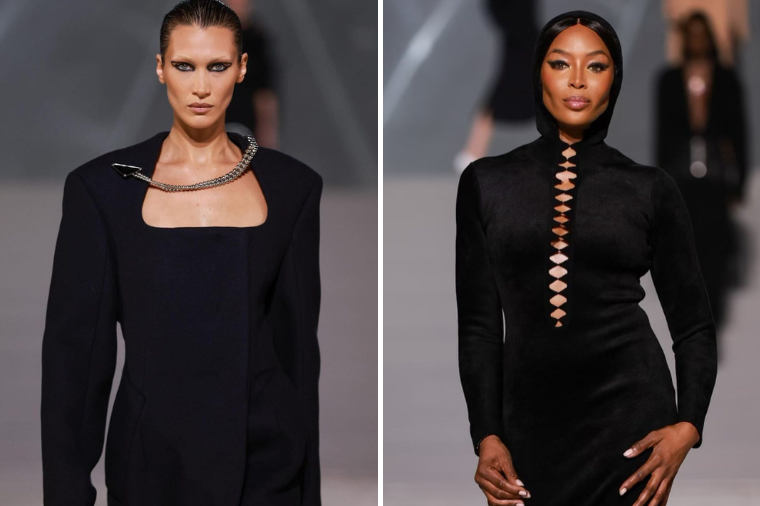 To mark the launch, a star-studded gala was held on Friday as well as a fashion show featuring top models from the globe over including Campbell herself, Bella Hadid, Chanel Ayan, Ikram Abdi Omar, Alpha Dia, Adhel Bol and more.

The new initiative, in partnership with Qatar Creates and under the patronage of Her Excellency Sheikha Al-Mayassa bint Hamad bin Khalifa Al Thani, aims to support the next generation of creative and business talent with a platform of support towards success. The show celebrated Africa and the Diaspora and featured over 50 leading fashion houses alongside more than 20 emerging designers of African descent.

Hadid opened the show wearing a head-to-toe black Prada ensemble which was complemented with a dark makeup look. On social media, the 26-year-old said it was an “honour” to open the groundbreaking fashion show.

“Was a pure joy to see Naomi bring her beautiful culture of Africa to center [sic] stage, and an honor [sic] to be a part of another show and auction to raise money for relief in the African region,” she said.

Meanwhile, Campbell wore two looks for the showcase. First, like Hadid, was an all-black outfit designed by Alaia. The second was a feathered white and blue ombre gown by Valentino.

The show was then followed by a gala where over 1000 VIP guests from the worlds of fashion, entertainment, arts and business were in attendance.

Just a couple of nights prior to the launch of EMERGE, the who’s who in fashion descended upon Doha last night to attend the Fashion Trust Arabia (FTA) awards.

Both international and regional celebrities attended the prestigious gala, where a total of six designers from the Arab region were honoured in an array of different categories.