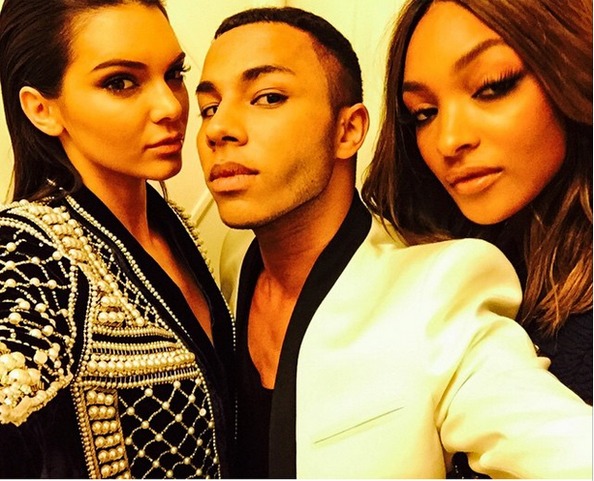 Who needs to make official statements when you have Kendall Jenner? The 19-year-old model hit the red carpet at the 2015 Billboard Music Awards wearing a piece from the new Balmain x H&M collection.

While the latest collaboration from the Swedish retail giant won’t be hitting stores until November 5, Olivier Rousteing,  creative director for Balmain, decided to take to Instagram, with his pal Kendall Jenner and model Jourdan Dunn (who also rocked the red carpet in one his collab pieces), to announce the exciting news, stating: “What happens in Vegas won’t stay in Vegas.” 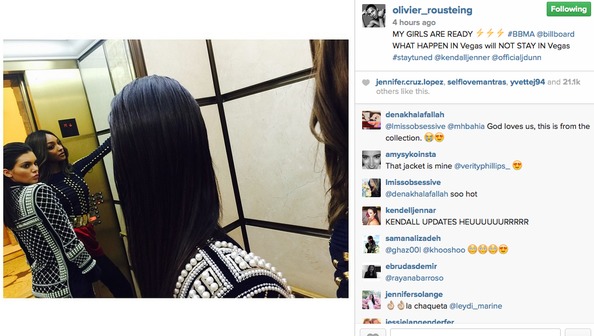 Offering us a sneak peek into what to expect from the latest collaboration, the two models both wore pearl encrusted ensembles to the  2015 Billboard Music Awards at the MGM Grand Garden Arena in Las Vegas. Kendall wore a midnight-blue velvet wrap mini-dress featuring Balmain’s signature white beading while Jourdan wore a two-piece outfit consisting of a red satin mini-skirt and a top with braided fabric.

While it is yet to be confirmed whether Kendall Jenner or Jourdan Dunn will be modelling the collection when it officially launches this winter, one thing is for sure; their collective Instagram following of 27.4 million certainly hasn’t hurt advertising the new fashion project – the power of the high profile model is bigger than ever. 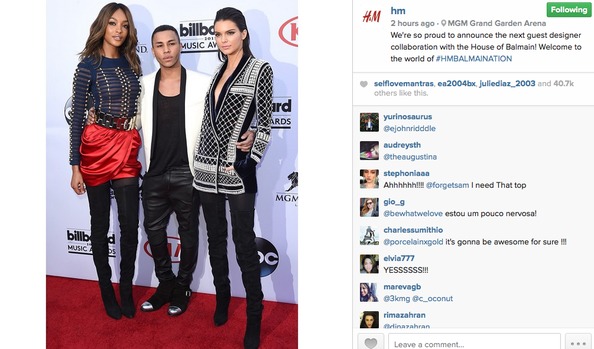 Olivier Rousteing walking in arm in with the models at the Billboard Music Awards was a great way to announce the partnership with H&M, the fast-fashion retailer whose designer collaboration series is now in its 11th year. The act follows very much in line with the Alexander Wang x H&M collaboration, which was celebrated at Coachella.

The 29-year-old, French designer follows in the footsteps of Stella McCartney, Lanvin, Alexander Wang, Karl Lagerfeld Isabel Marant and Versace. He said in an interview with Style: “It’s always been a dream to do it. When you do a collaboration with H&M, it’s a big step in the fashion industry. It’s a big achievement, professionally and also personally.”

With the Balmain x H&M collaboration launching on November 5, soon we can all be part of the famous Balmain Army.

GET READY FOR #HMBALMAINATION @HM next designer collaboration with Balmain launches worldwide 05.NOV.2015