The scene was set at the stunning Park Hyatt Dubai for the fifth annual Emirates Woman Woman Of The Year Awards, in association with ADCB. Honouring women in the business, arts, philanthropy and visionary fields, the awards payed homage to 21 remarkable nominees.

Organised by Elan Productions, the Park Hyatt Dubai’s Creek Ballroom and terrace were transformed into the stunning and sophisticated setting, where 400 of the UAE’s most influential members of society came together to celebrate the achievements of the region’s most inspiring, influential and successful women.

Entertained by renowned Italian actress and opera singer Serena Autieri, guests enjoyed an elegant cocktail reception, followed by a beautifully presented three-course dinner and awards ceremony. Each year the Emirates Woman Woman Of The Year Awards would not be possible without the support of our sponsors, so our thanks go to our official headline sponsor ADCB, and our partners Philips, Gargash Mercedes-Benz, Park Hyatt Dubai, MMI, Elemis and Etihad Airways.

From the fabulous fashion on show to the wonderful winners nominated and voted for by the Emirates Woman readers, this year’s awards were a resounding success both on and off the stage. So drum roll, please. Ladies and gentlemen, it gives us great pleasure to present to you the incredible winners of the Emirates Woman Woman Of The Year Awards 2010…

As Ian Fairservice, Managing Partner and Group Editor of Motivate Publishing, announced the name of the winner of the much-coveted accolade of Emirates Woman Woman Of The Year Awards 2010, the audience’s applause was rapturous. Taking to the stage from her seat at the table appropriately entitled Dedication, where she sat with both her daughter and granddaughter, 90-year-old author and motivational speaker Mariam Behnam was awarded a standing ovation from the night’s 400 guests, before giving a heart-warming and inspiring speech of appreciation, and going on to thank Motivate Publishing for its contribution to publishing in the region.

Mariam’s vocational repertoire as an author, women’s rights advocate, diplomat and motivational speaker was deservingly commended, winning not only the highest accolade of Emirates Woman Of The Year 2010, but also the trophy for the Artists category. As the first female journalist for Gulf News Mariam, who has called the UAE home for 30 years, helped launch Al Juma arts and culture magazine, has published four books, including her autobiography Zelzelah and lectured on women’s rights and empowerment. Currently working as a Senior Adviser for the Dubai International Women’s Club, her truly inspiring speech of appreciation for the award and thanks to Motivate Publishing explained how being named Emirates Woman, Woman Of The Year 2010 had created an extraordinary moment that the thoroughly charming lady said she would “remember forever.” 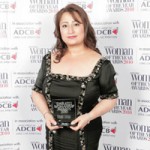 As Vice Chairperson of the Apparel Group (boasting brands such as Tommy Hilfiger, Bally and Kenneth Cole) Sima Ved was acclaimed for her amazing contribution and work within the fashion retail industry in the region. When accepting her award, Sima thanked her husband first and foremost for his unfaltering support, adding: “It was a huge surprise, but an incredible moment.” With a role that requires managing over 500 stores across 50 international labels, Sima is a female member of a unique visionary business elite in the UAE. 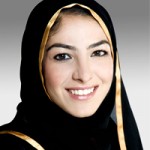 In recognition of her astounding achievement of being the first Emirati female and UAE national to reach the North Pole, Elham Al-Qasimi was awarded the Visionaries trophy. An expedition completed in April this year in just eight days, and one made entirely unsupported (carrying all her supplies by herself), Elham’s commitment, dedication and ability to push boundaries clearly inspired her many voters. In her absence, the award was collected by friend and PR representative, Danielle Wilson, who said Elham was “over the moon” at winning the award. 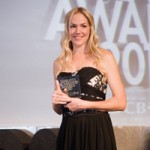 A heartwarming and emotional acceptance speech was given by the unassuming Lucy Bruce, who was awarded the Humanitarians honour due to her founding of, and work for, Harmony House; the non-profit organisation that provides education, food and basic hygiene to nearly 100 under-privileged children living in the outskirts of Delhi in India. Lucy is actively involved in every aspect of fundraising and management of this incredibly worthwhile charity, and after describing her utter surprise at winning the award, she ended her speech with words of tear-filled thanks to her husband Gaurav Sinha with whom she runs Harmony House. 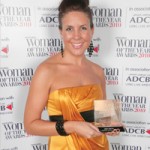 Marketing Communications Manager Emily Cheyne walked away with the incredible prize of the second annual ADCB Ambition Award, the focus of which was budding entrepreneurs and business start-ups. Making dreams a reality, and running in conjunction with the Emirates Woman Of The Year Awards, the exciting competition creates the opportunity for go-getting Emirates Woman readers to win a grant of US$10,000 from ADCB alongside a business course courtesy of INSEAD Business School. Emily runs self-start-up life coaching business Know How Life, and her winning ambition is to provide first-class life-coaching and psychology support to residents of the UAE, working especially to help empower women in the region.