Arab Spring Five Years On: Where Are We Now? 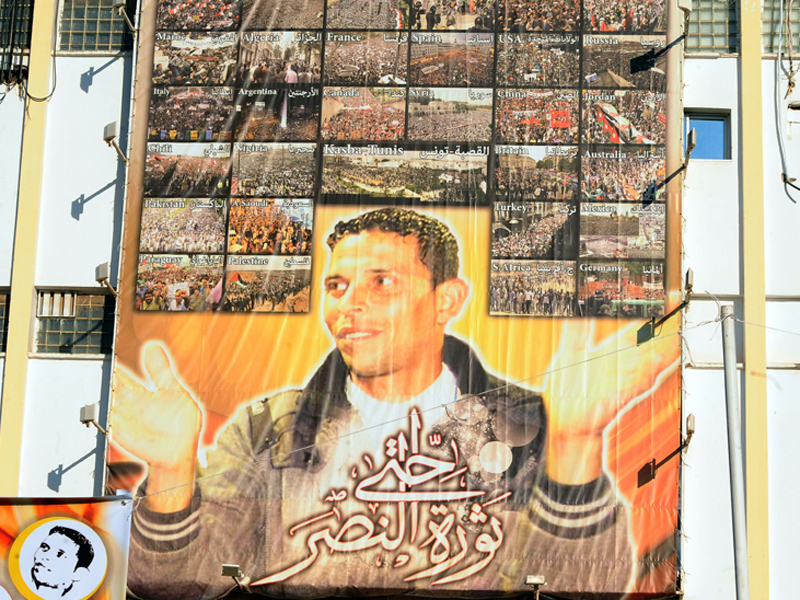 On December 17, 2010, Tarek el Tayeb Mohamed Bouazizi, a 26-year-old Tunisian street vendor, set himself on fire outside the governor’s office of his town, Sidi Bouzid.

Within two months, the ripples of his actions had spread across the Maghreb and Middle East.

Protestors took to the streets in campaigns – many of which developed into revolutions, and three into civil wars – against governments in states including Tunisia, Algeria, Morocco, Libya, Egypt, Syria, Saudi Arabia, Bahrain, Yemen, Oman and Jordan.

And though five years have passed since Bouazizi’s desperate act, the ‘Arab Spring’ is by no means over.

This is most obvious in Libya, Syria and Yemen, where conflict has torn states to pieces, and illegal militias and international armed forces have cast people into chaos and mortal danger. 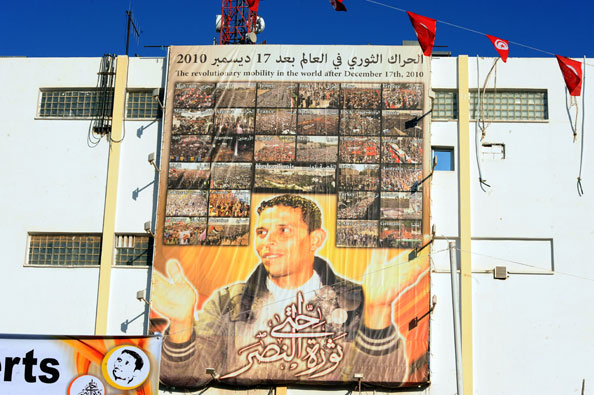 But it is also true in Morocco and Jordan, where promised reforms have not yet happened, or are happening so slowly as to antagonise those who agitated for them; in Egypt, where a nation which fought to overthrow a military dictator has become so disillusioned by its situation under a new military dictator that only 26 per cent of people voted in its most recent General Election.

Even in Tunisia – the state whose revolution has so far most successfully delivered the aims of its protagonists (a functioning democracy, greater rights for employees and women, and a constitution guaranteeing those rights) – economic and political matters could still disrupt or even derail the project.

Everywhere we look, the Arab Spring – and the inspirations for the protests, campaigns and revolutions within it – is still taking place. 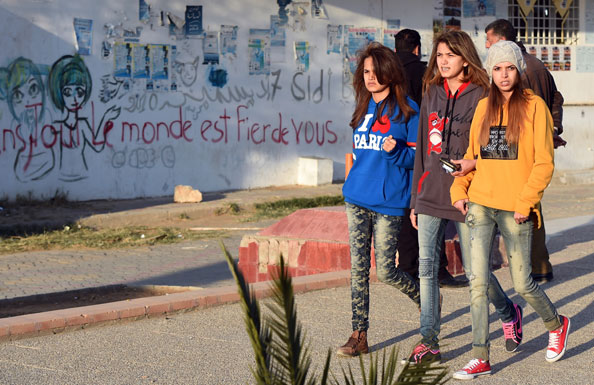 To many Western observers, the ‘Spring’ was an expression of the political will of people in the Maghreb and Middle East – a desire to rise up against repressive dictatorial regimes and take control of their own lives and the policies of their states.

Though there is certainly some truth in this view, it overlooks the fact that similar demonstrations also took place across Europe – in Greece, Spain and the UK, for example – at around the same time.

Others have pointed to the extreme economic difficulties – in part inspired, like those of states all over the world, by the global economic crash of 2008 – faced by many of the people who took to the streets: in Tunisia, Jordan and Libya, for example, unemployment among the traditionally most volatile section of society; people aged 16-24, was close to 30 per cent.

In Morocco and Libya, unemployment amongst graduates, who could be expected to have clearly-defined ideas on how a state should be run, and perhaps the contacts to organise and mobilise, were even higher (in Morocco, 39 per cent of graduates were unemployed in 2010).

But this analysis also runs up against problems, and for the same reason. In Europe, the protests did not develop into revolution; still less war. Yet in five ‘Spring’ states, revolution and/or war was the direct result, and in a sixth – Bahrain – the government crushed protest with the help of the armed forces, resulting in at least 122 deaths and 2,908 injuries.

History is seldom kind enough to present the causes of significant events in one easy package. But in this, the ‘Spring’ is an exception. Its most prominent themes were in fact embodied in its inspiration, Mohamed Bouazizi.

Bouazizi had aspired to attend university, but was forced instead by poverty to leave education to provide for his family.

Unable to find a job in Sidi Bouzid, where 30 per cent of people were unemployed, he set himself up as a street vendor, using the money he earned to buy food for his family, as well as to pay for one of his sisters to attend university.

But life was not easy. Bouazizi put himself in debt each time he bought the produce he needed, and earned only US$140 per month once those debts were repaid. 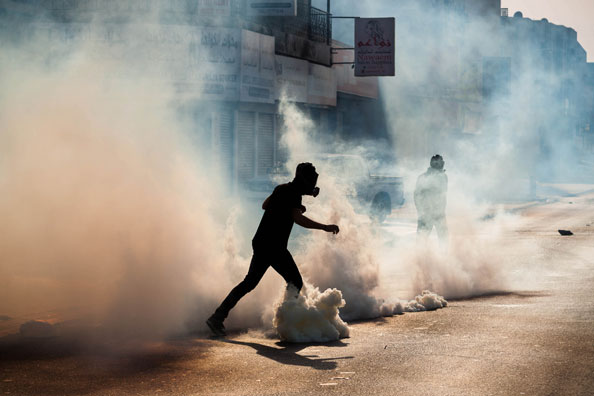 Bahraini protesters between the clouds of tear gas in clashes marking the fourth anniversary of the Gulf coalition,

And the Tunisian authorities – police and government – were not helpful. Police are alleged to have regularly demanded payment from him because he had no street vendor’s permit, even though none was necessary in Sidi Bouzid – effectively attempting to force him to bribe them. On the morning of 17 December 2010, when Bouazizi sought the return of his scales and produce barrow, which had been confiscated because he refused to pay the bribe police officers demanded (Bouazizi had the previous evening contracted US$200 of debt to buy produce to sell), the governor refused to see or even listen to him.

Across the Maghreb and Middle East, the same elements fed into movements of mass protest: poverty and lack of opportunity combined with often repressive and/or corrupt law-enforcement and a political regime which was remote, aloof and disconnected from the people, to create conditions in which people concluded life could not continue as it was.

Faced with governments they had played no part in choosing, and unable to engage in the political system, they took to the streets to demand change.

Not all the demands were identical. In Tunisia, Libya, Syria and Egypt, for example, the aim was to force dictators from power. In Jordan and Morocco, campaigners called for constitutional monarchies, with elected governments taking greater control. In Saudi Arabia, a series of connected protests called for less restrictive social practice and greater social freedoms – not least for women.

Related Story: Women Get The Right To Vote In Saudi Arabia

Nor, of course, were the outcomes the same – though Tunisia, Libya and Egypt succeeded in toppling dictators, Libya is now in its second year of civil war, with its two illegitimate governments powerless to intervene. Egypt’s democracy lasted only two years before a new military dictator shot his way to power. In Tunisia, the new democracy holds. It faces challenges, but the mark of a political system’s success is how it overcomes challenges, not that it never faces any.

Syria remains gripped by a multi-sided civil war, millions of its inhabitants made homeless by the bombs, bullets, fire and terror of that conflict, while several states are now engaged in a battle for power in Yemen which is – as in all conflicts – delivering to civilians violence, malnutrition, disease and starvation.

In Morocco and Jordan, meanwhile, the people wait to see whether promised reform will materialise (and in Jordan’s case, consider and reconsider the virtue of further action against the situation in Syria, across its northern border). In Bahrain, it appears torture, death and oppression have won, for now at least.

Of the ‘Spring’s’ economic outcomes, a similarly small amount can be concluded.

Unemployment is not currently high on the list of Libyan, Syrian or Yemeni concerns.

In Tunisia, which had a national unemployment rate of 13 per cent pre-revolution, the figure is now 15.2 per cent – rising to 24 per cent among women. 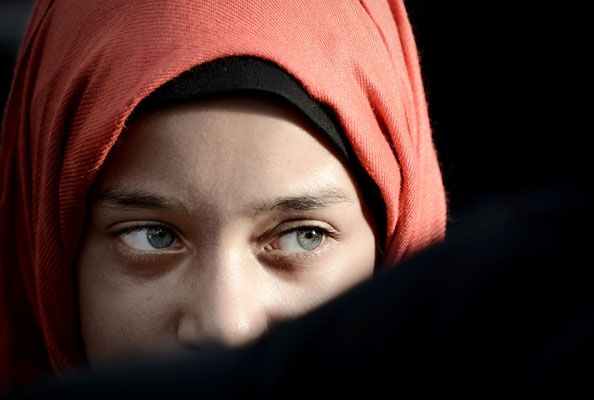 Is there much hope? Five years on from the Arab Spring

Both pre- and post- ‘Spring’ figures are remarkably high, but to offer some context, Tunisia’s record low unemployment rate was 12.4 per cent, recorded in 2007, and its record high 18.9 per cent, in the fourth quarter of 2011.

The state’s youth unemployment rate is far worse, however. Almost 40 per cent of young people in Tunisia have neither a job nor a place on a degree or other education course.

In Morocco, the unemployment rate has fallen to 9.3 per cent (officially 11 per cent from women, but as the World Bank noted early this year, only 26 per cent of women in Morocco are ‘economically-active’), but sits at 39 per cent for people with a university degree. In Jordan, the rate is 13.8 per cent (22.1 per cent for women), up from 12.5 per cent in January 2011, with a youth unemployment rate of almost 30 per cent.

As in its political outcomes, then, the ‘Arab Spring’ has been neither a marked economic success, nor an unmitigated failure. Yet.

Because that, five years on, is the point about the protests, campaigns, revolutions and even wars which are a part of the Arab Spring. They, and as a result the ‘Spring’ itself, have not yet ended. In history, few things ever do. Most simply change, until they are no longer easily recognisable.

The Arab Spring has not succeeded. Nor has it failed. Because, five years after the self-immolation of Tarek el Tayeb Mohamed Bouazizi, in a small, poor town in a corner of Tunisia, it has not yet finished. Perhaps, it never will.