The inspirational Arab women taking the Tokyo Olympics by storm 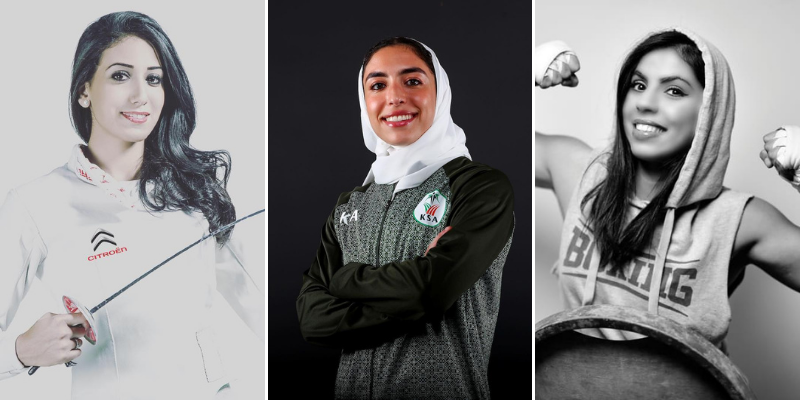 As the Olympic Games comes to a close in Tokyo this weekend, there’s no doubt the Arab region has been well represented.

In particular, females from the region have taken part in a slew of events across the board, taking the Games by storm.

From shooting, rowing, boxing, fencing and other such adrenaline-fueled sports at the Olympic Games Tokyo 2020 this year, the Arab women participating have carried their respective countries’ flags with pride ensuring they continue to inspire a generation of women that are yet to participate.

Emirates Woman takes a closer look at all the female participants at the Olympics this year and how they’ve made a noteworthy impact.

Having escaped from Syria in 2015, Yusra Mardini – who now resides in Germany – competed for the Refugee Team at the Olympics. Competing as a swimmer, the sport “literally” saved her life when she was escaping her country to safety. She fled Syria with her sister in an inflatable boat, which took on water when they reached Greek waters.

“Swimming literally saved my life on the way to Germany by escaping from Syria,” she told Sky News ahead of the Olympics. “And when I came here, swimming helped me rebuild my life from zero.”

This inspiring 17-year old represented Kuwait in swimming and competed in the women’s 50m freestyle, raising the flag high as the country first made its appearance in the 1968 Olympic Games. She’s also the first woman to carry Kuwait’s flag at any Olympics, as she has made her country proud.

The Algerian swimmer represented her country at the Summer Olympics this year while being the flag bearer for Algeria during the opening ceremony. With a strong passion for swimming, she has been actively involved in the sport since the age of four and continues to work harder as she has competed twice in the women’s 100m freestyle and women’s 50m freestyle.

Representing the Kingdom at the Tokyo Games and beyond, the Saudi Arabian athlete is known as the fasted female in Saudi. She was given the honour of being the flag bearer for her nation in the opening ceremony.

The Tunisian athlete has been fencing since she was five and has made the country proud on multiple occasions. At the Rio Games in 2016, the fencer won the bronze medal. This year, she didn’t receive a medal, but still proudly represented her country.

The Syrian table tennis player has been the youngest female competitor at this year’s event while playing the sport since the age of five and having also competed with competitors much older than her in the past. Having played table tennis since 2014, she’s the first Syrian to compete in the Olympics table tennis through qualification.

This year marked the Moroccan boxer’s first time competing at the Olympic Games. The 24-year-old previously won the gold medal at the 2017 African Amateur Boxing Championships and then went on to win a bronze medal at the 2019 African Games.

The Palestinian swimmer has made years of sacrifices and put in a copious amount of hard work to compete in the Tokyo Olympics. She proudly served as a flagbearer for her country during the opening ceremony of the Olympics.

At just 15-years-old, Noor Yusuf Abdulla represented Bahrain at the Tokyo Olympics. She competed in the women’s 50-metre freestyle and was also a flag bearer at the opening ceremony.

Representing Egypt at the Games, Hedaya Wahba is a medal-winning taekwondo practitioner. She won the bronze medal in 2016 in the –57kg category and went on to win another bronze medal at this year’s Games in the –67kg category.

Hailing from Qatar, Tala Abujbara is a rower and competed in the women’s single sculls event at the Games.