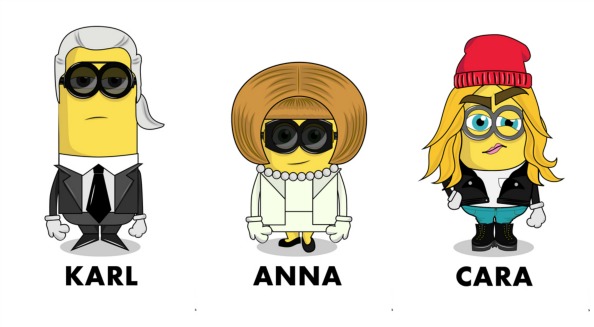 Prepare for world domination from the yellow army of new fashion influencers taking the humankind by storm.

There is no doubt that Minions Mania has taken over the whole world with the blockbuster movie grossing over  US$760 million and topping the box office for three consecutive weekends since it’s premiere – it had the biggest opening day of all time for an animated film in Belgium, France, Hungary, Russia, South Africa, Switzerland, Chile, Mexico, Venezuela, Hong Kong, Philippines, Taiwan, and Thailand to name a few countries.

From starring on a Vogue cover to getting their own clothing collaboration with the likes of Giles Deacon and Rupert Sanderson – these cute cartoon characters  (as shown originally on Stylight) did not spare the world of style from their conquest as these fashion minions prove.

From Anna Wintour’s signature bob and Karl Lagerfeld’s suave shades, the industry’s most iconic stars have joined the yellow fever, being transformed into the fun-tastic fashion minions! Take a peek at this uber cool gallery, as our favourite fashion celebrities get an unique makeover.