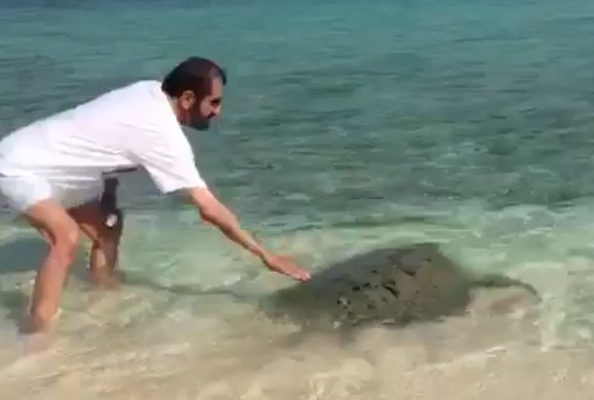 The royal has now given us two “awww” moments this week.

First he delighted a Sharjah schoolgirl when he dropped by her house after hearing her practice a speech, and now the Ruler of Dubai has made another adorable friend.

HH Sheikh Mohammed bin Rashid Al Maktoum, Vice President of the UAE, has been captured bonding with a sea turtle as the creature made its way into the Arabian Gulf.

In a video posted to Instagram by his wife, HRH Princess Haya bint Al Hussein, the royal gave the animal’s shell a jovial pat as it crawled into the water.

“The desert and the sea are equal parts of the UAE heritage, but not all people know them both as well as Sheikh Mohammed bin Rashid,” Princess Haya captioned the video.

Since it was uploaded yesterday, the video has already garnered more than 33,000 views and over 200 comments.

The royal reposted the video on his own Instagram account too, where it’s been viewed around 200,000 times.

It’s unknown whether Sheikh Mohammed stumbled on the turtle during a stroll along the shore, or if he was helping release it back into the wild.

There is actually a strong focus on conservation of the creatures in the UAE, and Dubai’s glamorous Burj Al Arab hotel even has a rehabilitation centre inside it.

This isn’t the only lovely thing Sheikh Mohammed’s done in the last few days either.

The royal opened the Al Jalila Children’s Specialty Hospital at Al Jaddaf in Dubai on Tuesday, where he spent time with young patients.

The hospital, which is named after Sheikh Mohammed’s daughter, was ordered by the royal as a “gift” to the children of Dubai.